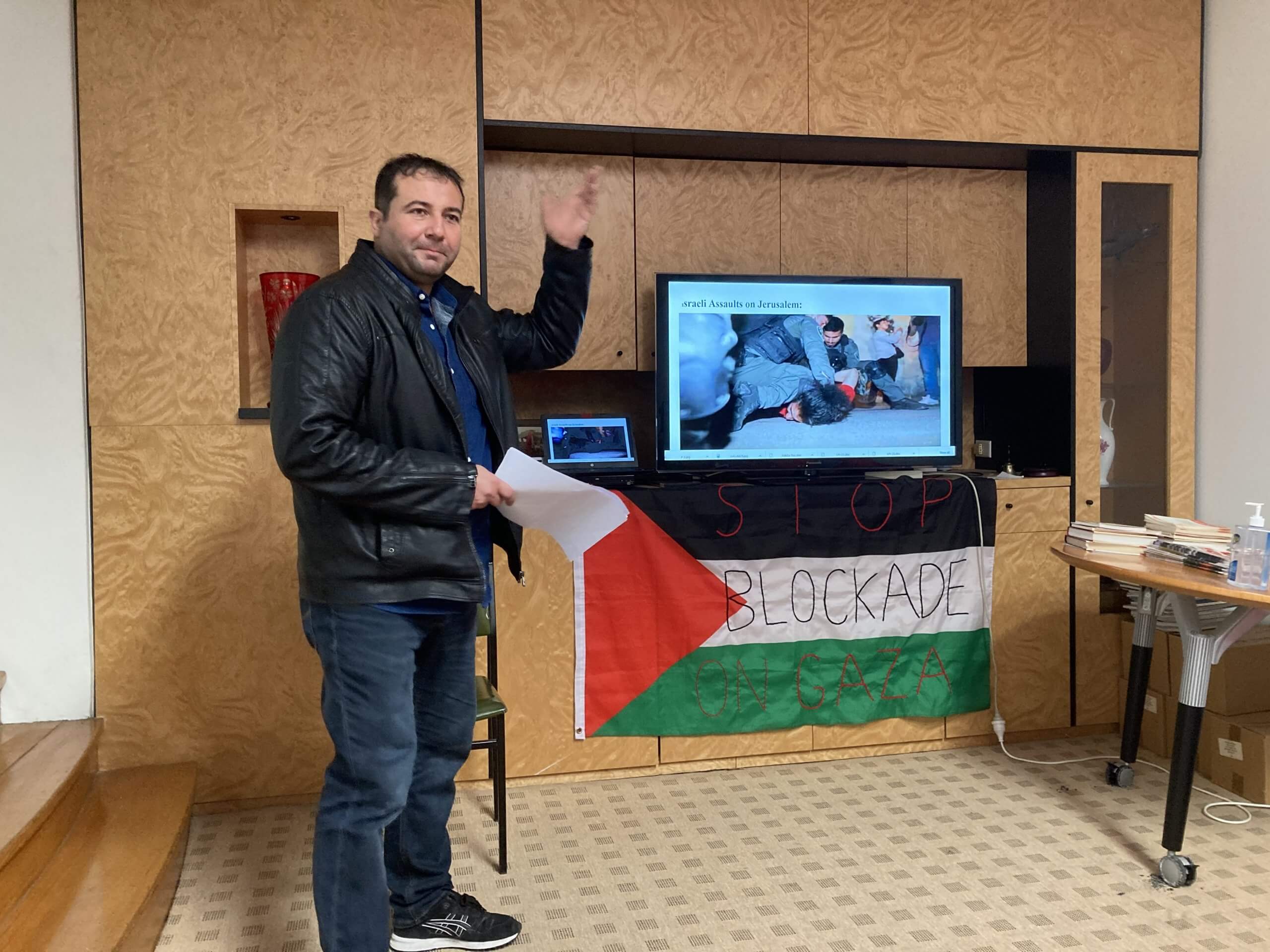 The following is a talk given by Shamikh Bavda, a Palestinian from Gaza, at a function commemorating al Nakba at the CPA headquarters in Sydney on Sunday, 16th May. Please note: the function was held prior to the cease-fire being announced.

First, I would like to convey the greetings of Palestinian people in besieged Gaza to you, on the occasion of “Nakba Day.”

Nakba day: “Day of the Catastrophe” is an annual day of commemoration of the displacement that preceded and followed the Israeli declaration of independence in 1948.

As of today, more than 140 Palestinians, forty-five of them children and at least fifteen women have been killed in Israeli bombing attacks in Gaza Strip since Monday night [the 10th of May] – further straining hospitals already under heavy pressure during the COVID-19 pandemic.

The Israeli offensive has targeted civilians and civilian infrastructure, killed tens of people and caused enormous destruction throughout Gaza. The Israeli forces destroyed houses, killing people while in their homes, and demolished apartments and high-rise buildings throughout Gaza.

This aggression in Gaza came after the Israeli forces assaulted worshippers in the al-Aqsa Mosque compound, injuring hundreds. Since the beginning of the holy month of Ramadan, Israeli occupation forces have banned gatherings and restricted Palestinian access to al-Aqsa compound for observance of the holy month.

The violent incursions against al-Aqsa compound by settlers continued under the protection of Israeli occupation forces, who themselves continued attacking worshippers and detaining hundreds of Palestinians, including women, children, and the elderly.

Thousands of Palestinians are being forcibly evicted and replaced with Israeli settlers in East Jerusalem. Palestinian families in the East Jerusalem neighbourhood Sheikh Jarrah are experiencing the largest forced mass displacement since 1967.

The forced evictions and displacement of Palestinians in East Jerusalem the violent attacks against worshippers and raids of Al Haram al-Sharif and Al Aqsa Mosque are deliberate actions by Israeli forces to consolidate control of the city and to change the demographic composition, character, and legal status of East Jerusalem. It can be described as ethnic cleansing in Jerusalem.

The latest Israeli escalation in Jerusalem comes in the context of the policy of violating human rights in the West Bank, arresting thousands of Palestinians, including some members of parliament, targeting and killing the civilians and innocent children, refusing to comply with UN decisions regarding respect for citizens’ human rights, expanding the settlements, demolishing homes, and expelling Palestinians in East Jerusalem, in order to establish the colonial project which is called Great Jerusalem (Jerusalem Metropolitan).

This is a project which is called the boundaries of the Great Jerusalem (Metropolitan).

The goals of the racists of Israel are as follows:

During the violation of human rights in Jerusalem, the Palestinian resistance issued an ultimatum giving Israeli occupation an hour – until 6:00 pm local time – to withdraw its forces from Al-Aqsa and the occupied East Jerusalem neighbourhood of Sheikh Jarrah, and free detainees.

When the deadline passed, resistance groups in Gaza fired volleys of rockets towards Israeli settlements for the first time since the 2014 summer war. The resistance in Gaza said that resistance fighters “fired rockets in response to the enemies’ crimes and aggression against the holy city, and their abuse of the people in Sheikh Jarrah and Al Aqsa mosque.”

The Palestinian public have responded to Israeli violations by holding vigils, peaceful protests, and demonstrations in Palestine which have been suppressed by Israeli occupation forces who have arrested and assaulted protesters.

Such warnings should be understood as threats of collective punishment against civilians in Gaza. Israeli ministers approved an aerial offensive against the territory.

Egypt, Qatar, and the United Nations were reportedly mediating between Palestinians and Israeli occupation to slow the escalation.

The US government expressed its deep concern over “violent confrontations” in Jerusalem but reserved explicit condemnation for rockets fired from Gaza. Washington’s mission to the UN Security Council reportedly prevented the release of a joint statement condemning violence in Jerusalem.

The European Union’s envoy to Israel said he was “extremely concerned over the violence in Jerusalem” but only said that firing of rockets was “totally unacceptable and needs to stop.”

The UN Human Rights office warned that Israeli violations could amount to “war crimes”, and the Secretary-General urged Israel to cease in line with its obligations under international humanitarian and human rights law.

At this point, expressing concern is not a sufficient response. The international community and media continue to approach the situation in Jerusalem with false equivalence, despite there being no parity between Israel the occupier and oppressor, and Palestinians the occupied and oppressed.

The international community must re-evaluate and reconsider its approach to Israel with this in mind and focus on international law and human rights tools such as the International Criminal Court. Additionally, full recognition of the state of Palestine is vital to adequately empower Palestine.

Finally, the international community must act immediately to protect the Palestinian people against Israeli violations in the interests of upholding international law and saving human lives.

I would like to seize the opportunity and this event to confirm our deep deepest gratitude to our international friends and partners, and the states that support Palestine, and to encourage you all to take a leading role in the struggle for justice and real peace in the Middle East, and the entire world.

In spite of all the Israeli crimes against the Palestinians, they continued to find creative methods for resistance to the violence and occupation.

This raises our morale and gives us the hope that we will achieve our national aims of freedom, liberation, and independence. I am so proud of my people and our supporters who refuse and resist colonialism.