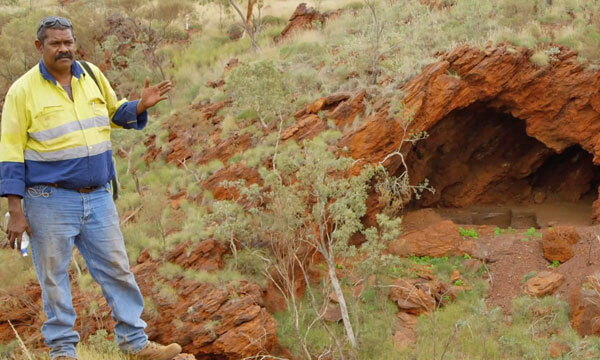 46,000 year old caves at the Juukan Gorge in the Pilbara region of Western Australia.

On 9th December 2020, an interim report was released on the parliamentary inquiry into the destruction of 46,000 year old caves at the Juukan Gorge in the Pilbara region of Western Australia. The report was titled Never Again.

The Juukan Gorge site, sacred to Puutu Kunti Kurrama and Pinikura (PKKP) people and a cultural and archaeological site of world significance, was deliberately and knowingly destroyed by mining giant Rio Tinto on 24th May 2020 in order to expand an iron ore mine.

Despite the immediate outcry over this act of destruction carried out in the pursuit of mining profits, just five days later WA Aboriginal Affairs Minister Ben Wyatt signed approval for BHP to destroy 40 millennia-old cultural sites of the Banjima people in the Ddjajaling Range, also in the Pilbara region and also in order to expand an iron ore mine. Although the outcry and scrutiny over Rio Tinto’s actions has led to BHP reviewing its options, it is still likely that some part of this plan will go ahead, but the details are unclear.

“There are other groups, including our Kurrupa neighbours, who have a direct connection with this place through their own knowledge and songlines and through the creation stories and through families. They have told us that they also feel powerless and angry at this having happened. We have an obligation to look after country in accordance with traditional law and customs. It is our obligation to the old people, who also looked after it. It was on loan to us to pass on to our future generations, our Puutu Kunti Kurrama and Pinikura children, and the future generations yet to come. The disaster has now left a gaping hole in our ability to pass on our heritage to our children and grandchildren.”

The report gives damning findings of the failures of Rio Tinto, legislation, and government:

“The legal framework for the protection of Aboriginal heritage in Western Australia and at the Federal level is completely inadequate. The Western Australian Aboriginal Heritage Act 1972 (AHA) made the destruction of the site legal and offered no avenue to protect it even when its archaeological significance had been revealed. Federal legislation offered no meaningful protection.”

“The agreements between Rio Tinto and the PKKP required the PKKP to cede their rights and prevented them from contesting company decisions, raising concerns, or having recourse to law to protect heritage sites.”

“The Section 18 administrative process approving the consent was seriously flawed. Clear evidence as to the significance of the rock shelters was ignored, mistakes in the application forms were missed, and the PKKP and key consultants were not contacted by state government officials for their views on the application.”

“Collectively, these deficiencies represent more than just a series of ‘unfortunate mistakes’ or mere ineptitude by individuals. Rio Tinto’s conduct reflects a corporate culture which prioritised commercial gain over the kind of meaningful engagement with Traditional Owners that should form a critical part of their social licence to operate. This corporate culture belied Rio Tinto’s public rhetoric of working in partnership with First Nations people, as reflected in the company’s (now dis-endorsed) Reconciliation Action Plan.”

The report made many recommendations, including that Rio Tinto negotiate a restitution package, refrain from any further use of the Section 18 permissions until the legislation has been reviewed, and “that the Australian Government urgently review the adequacy of the Aboriginal and Torres Strait Islander Heritage Protection Act 1984.”

The deficiencies in federal legislation regarding Aboriginal and Torres Strait Islander land rights and protection of culture and heritage mean that inconsistent state-by-state legislation plays a large role.

However, a consistency across states is the inadequacy of rights and protections, and the disadvantage to Indigenous peoples in favour of mining companies and other huge corporations.

Consider the action by the Queensland government in 2019 to unilaterally extinguish native title for well over three thousand acres of the sovereign land of the Wangan and Jagalingou people, handing it over to Indian corporation Adani for coal mining purposes. The rightful Indigenous owners, who actively used the land for significant ceremonial purposes, were informed without prior warning that they were trespassing on private property.

Recently, protest has been building over Santos’ planned Narrabri coal seam gas project in NSW on Gomeroi Country, approved by Environmental Minister Sussan Ley. This project threatens to cause massive environmental destruction, including to sacred sites and wildlife habitats in the Pilliga Forest, and risks polluting the Great Artesian Basin. A national day of action against the project was held on the 3rd of December, with protests organised around the country.

The Sydney protest was chaired by Gamilaraay Next Generation representative Ian Brown, who outlined the demands “for Santos to cease work on the Narrabri gas-fields — in our home country — immediately,” … “for federal and state governments to amend the cultural heritage laws that allowed this destruction and desecration of our homelands to happen in the first place” and “for Federal Environment Minister Sussan Ley and New South Wales Premier Gladys Berejiklian to meet with Gomeroi people and undergo proper consultation.”

In Canberra, organiser and Gomeroi Traditional Owner Polly Cutmore said: “We are calling on all our mob, and anyone who loves and respects Gomeroi country to let these politicians know they don’t make decisions for us.”

“Sussan Ley has not taken notice of the majority of people who live on Gomeroi Country and oppose this gas field. She has ignored us, the scientists, the farmers, so many people, and we’ve had enough. She should meet with us and tell us directly why she has ignored 23,000 submissions opposing this gas field, and why she is relying on Santos’ word.”

Mining companies’ lack of respect for Indigenous people, culture, land, and heritage, as well as for protection of the environment, is all too obvious. Such matters are to them only an inconvenient obstacle to their only desire, the unfettered pursuit of profits. We need a government which will put people’s interest first, not the profits of huge corporations; one which will enact legislation with strong and proactive protections; one which will make these corporations suffer consequences (for once!) for the irreversible harms they have committed against peoples and the planet.