The struggle on Djab Wurrung Country

The ongoing struggle at the Djab Wurrung Embassy has garnered serious media attention in the past year. The issue centres on the Victorian government’s proposal to upgrade the highway between Ararat and Buangor in central Victoria by creating a bypass through Djab Wurrung country. This section of country contains a sacred 800-year-old birthing tree and, until late last year, a sacred 350-year-old Directions tree. The Djab Wurrung Heritage Protection Embassy was established in June 2018 to protect sacred trees on the site from being felled to make way for the proposed highway upgrade. The proposed extension was due to commence in late 2017, however, protectors at the embassy have managed to forestall it until today. The construction would only save commuters three minutes travel time at the expense of hundreds of years of irreplaceable cultural heritage.

Throughout the occupation of the Embassy on Djab Wurrung country, the Victorian government has tried its best to remove protectors from the site. There have been various police actions and red alerts during this period, as well as a protracted legal battle. A number of injunctions against works have been issued, and as of this writing, an injunction by the Supreme Court of Victoria remains in place. On the 17th of December 2020, the Federal Court overturned Environment Minister Susan Ley’s decision to reject an appeal against the works. Justice Griffiths, seeing that the Minister “may not conduct a reconsideration with an open mind” directed the new decision to be made by another minister connected with the Aboriginal and Torres Strait Islanders Heritage Protection Act. This is the third time the government has been ordered by a court to reconsider its decision since the first application for protection was lodged in 2017.

The years-long resistance at the Djab Wurrung embassy came to a head late last year when, on the 26th of October, the Victorian government cut down the Directions Tree. On the same day that Victorian Premier Daniel Andrews announced that Melbourne’s lockdown would finally be lifted, police occupied the site and handed out over $150,000 in fines for alleged breaches of the COVID safety regulations. Later that day, amid the end of lockdown celebrations and jokes about “getting on the beers,” an irreplaceable piece of cultural history was lost as the Directions Tree was cut down and removed from the site. That now-infamous image of the Tree being unceremoniously carted away on the back of a truck is indelibly etched in the minds of all who saw it and stands as an indictment of the Andrews government’s policy towards Indigenous Victorians. No amount of relatable banter about going “higher up the shelf” should ever be allowed to distract Victorians from what Daniel Andrews has perpetrated – a cultural genocide against Indigenous Victorians.

In a stark display of neoliberal policy, this horrific act came at a time when Victoria is in the process of negotiating a treaty with its Traditional Owners. Not unexpectedly, the destruction of the Directions Tree has seriously undermined Treaty efforts. “If a treaty is to be in any way meaningful, it has to mean that non-Indigenous society understands and respects Aboriginal law,” say representatives from the Embassy, “This is Aboriginal law in practice and the Victorian State Government is literally bulldozing over the top of it.” The Treaty process was officially commenced in 2018 when the State Parliament passed the Advancing the Treaty Process with Aboriginal Victorians Act. Since then, a First People’s Assembly has been elected to “support future treaty negotiations.” But it is hard to believe that this is anything more than mere lip service to Indigenous land rights, a show of mock respect designed to make “Dandrews” look good. The government displayed its true colours when it tore down the Directions Tree, and as a result, some Indigenous Victorians have lost faith in the process. “I believe in a Treaty, but I don’t believe in this Treaty,” said former First Nations Assembly Member and Djab Wurrung woman Sissy Austin. Austin says that both the Treaty process and the desecration of Djab Wurrung country are products of the Andrews government, which only goes to show where its priorities truly lie when push comes to shove.

The struggle for Djab Wurrung country is a microcosm of the broader land rights fight taking place across the nation. Just last year, Rio Tinto blew up a 46,000 year-old heritage site at Juukan Gorge in Western Australia’s Pilbara region. A subsequent inquiry into this incident found that Rio Tinto “knew the value of what they were destroying but blew it up anyway” – of course they did. A settler-colonial nation rich in natural resources, land rights and Indigenous dispossession are baked into the fabric of the Australian class struggle. Capitalism’s insatiable appetite for growth consumes whatever natural or cultural heritage stands in the way of economic expansion. When there is money to be made, suddenly those brown-nosers who scream about Indigenous rights when it might win them votes become awfully silent.

Hence, the struggle for Indigenous self-determination is intricately tied up with the class struggle. And yet, they are not one and the same thing. As far back as 1938, the CPA has recognised that there is “a tendency to regard the aboriginal question as merely a class question.” This tendency is mistaken. Indigenous Australians, while they all belong to one class or the other, are a national group belonging to “a self-conscious national minority with its own culture (“The Aboriginal National Minority” Communist Review, February 1963).

Therefore, the fight for Indigenous self-determination is not purely a class issue, but it is a fight behind which the working class ought to throw its weight, with the aim of defeating imperialism.

Nevertheless, the intersection of Indigenous struggles with class cannot be ignored. It is obvious that the majority of Indigenous people have been proletarianised by the theft of their land and by the systemic oppression they face on the basis of their race. This remains largely true despite an emerging Indigenous “middle class,” and despite the existence of remote communities whose inhabitants are not strictly working class, living off the land as they do. The concerns of Indigenous Australians are the direct concern of the working class.

In June 1967, the 21st Congress of the CPA resolved that “[t]hose who benefit chiefly from wage-robbery of Aboriginal and Island workers and from the theft of Aboriginal lands are the big pastoral and mining concerns.” For this reason, it has been a part of the CPA party program for over 50 years that Aboriginal and Torres Strait Islanders’ rights are an aspect of the whole political struggle in Australia, something to be taken up by all Communists. 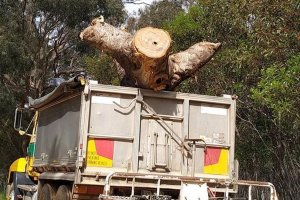 The role of the Communists

The aim of communists is to build a united revolutionary front for working people of all nations and national minorities. Communists have stood in solidarity with Indigenous Australians for our entire history on this continent, protesting the shocking massacres at Forrest River in the Kimberleys in 1926 and at Coniston in the NT in 1928; providing aid for the Pilbara stockman strike from 1946-1949 and then again in the 1966 Wave Hill walk-off by Gurindji stockmen which eventually culminated in the first land title claims in Australian history; the 1967 constitutional referendum that finally included indigenous people in the census; most recently at Djab Wurrung.

It is incumbent on us to continue this legacy. In practice, this means that we must continue to build an intersectional working-class movement which appreciates the relationship between Indigeneity and class.

As the crises of capitalism continue to deepen over the coming months and years, the issue of land rights must continue to occupy an important place in our struggle. Only by returning the land to its Traditional Custodians can it be preserved for future generations. Land rights are an Indigenous issue, and they are an environmental issue, and certainly, they are a class issue too.