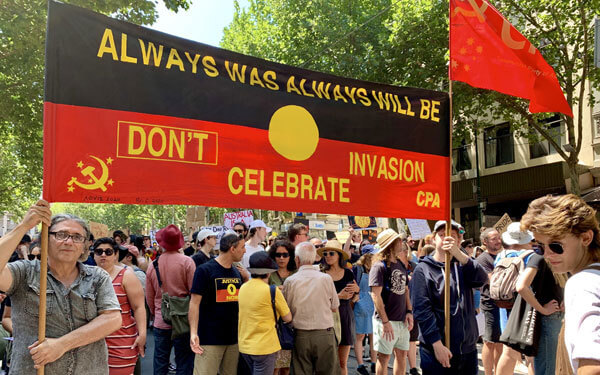 On this year’s Invasion Day, COVID-19 restrictions will be in effect throughout the country to minimise gatherings.

Despite a crowd of 30,000 people attending the Boxing Day cricket test last month, outdoor gatherings have been limited across the states and territories to all events.

In Victoria, Premier Daniel Andrews has said that an Invasion Day march could not be done safely according to public health teams. Instead, an Invasion Day dawn service supported by the Melbourne City Council will go ahead.

In Sydney, organisers FISTT stated that the march and rally would be going ahead despite outdoor gatherings being limited to 500 people.

“First Nations sovereignty has never been ceded,” says a statement on their Facebook event. “The global Black Lives Matter uprising in 2020 saw the biggest protests for Black rights on this continent in generations, in the middle of the pandemic. Invasion day marches in recent years have mobilised tens of thousands of people in many cities and towns. It is crucial we continue to build on this momentum.”

“Protest is COVID-safe – it happens outdoors, we will insist on social distancing, mask-wearing and other safety measures. We are asking people to register their attendance ahead of time, and there will be COVID marshalls with QR cards available to be scanned on the day.”

The situation echoes last year when the Black Lives Matter movement saw protests exceed restrictions, with organisers going ahead despite attempts to quash them.

Some politicians have come out to support protesting, with Greens members, Jenny Leong MP and David Shoebridge MLC, supporting people’s right to protest without fear of police brutality.

Throughout the pandemic, law enforcement has used breach of Public Health Order to enforce arbitrary arrests against peaceful protests. This is another way Covid-19 has been weaponised against those campaigning for systematic change.

Police oppression has been evident at other protests as well, such as when the twelve protestors were arrested at Sydney University protests, fighting to stop job cuts and fee hikes to education last July and August. Others were also arrested at the march, protesting Mark Latham’s anti-trans and gender diverse education bill. At this same protest, the LRAD (Long Range Acoustic Device), a military-grade weapon, was paraded by the police as a scare tactic. Most of the protestors were teenagers, young adults and those new to protesting.

With the Sydney Invasion Day protest going ahead it will be a waiting game to see if the courts rule against the event this time. Last year, the mass BLM rally and march was allowed to go ahead, but it’s possible that that won’t be the case this time. If the rally is ruled illegal, police will come out in force once more to intimidate, harass and brutalise those seeking to continue the hard work of justice for Indigenous Australians.

On the other side of the political spectrum, conservative rhetoric has been ramping up around what they deem to be censorship of Australia Day.

Western Sydney Mayor Steve Christou has come out against the cancellation of events celebrating the 26th of January as “un-Australian.”

In an interview with the Sydney Morning Herald, Cr Christou said, “It’s very sad that the bed-wetters and cancel-culture philosophers are dictating our agendas before a health directive has been issued.”

“COVID-19 has been around for more than a year now, and we have to accept that for the foreseeable future it is something we have to live with. We cannot continue cancelling and shutting everything down.”

The Mayor’s language insinuates here that anyone not willing to support a day marred by colonialism, racism, and genocide are just overly politically correct. This attitude and gaslighting perpetuate the harms against Indigenous Australians by minimising their right to fight back against injustice.

In a December segment of SkyNews, host Rita Panahi came out against councils that are cancelling these events. Her words echo Cr Christou’s attitude.

“[They] say it’s shameful and painful and divisive,” says Ms Panahi. “It’s just nonsense. All the polling shows that the majority of the population supports it.”

The newsreader then turned her attention to the Victorian Government cancelling the Melbourne CBD’s Australia Day Parade.

“Now they’re doing it under the guise of Covid, but remember this is happening a full month after 30 000 fans are going to be gathered at the MCG to watch the Boxing Day Tests. Crowds in the streets, out in the open, watching the Australia Day parade is apparently a Covid risk.”

Conservative talk is quick to fight for their own desire to celebrate Australia Day, but when protestors assert their ability to protest safely, a contradiction forms. Whilst getting up in arms about the restrictions placed on their events, they will turn around to demonise the protestors and tout their protests as unsafe. This is despite no reported cases being transmitted at a protest in Australia.

The Democracy is Essential campaign has fought back at attempts to silence protests during the pandemic. Meanwhile, corporations are being allowed to return to a somewhat more ‘business as usual’ approach to how they conduct gatherings and crowds.

“While much of NSW is open for business and large gatherings are allowed for commercial venues and sporting events,” states the campaign’s Facebook page. “COVID-safe protests against social injustice and austerity have been dispersed under Public Health Order restrictions. Activists have been fined thousands of dollars with the threat of larger fines and jail time.”

COVID-19 restrictions put in place by governments for this Invasion Day are inconsistent and being used as a political tool to stunt the momentum gained on the back of the BLM movement in Australia.