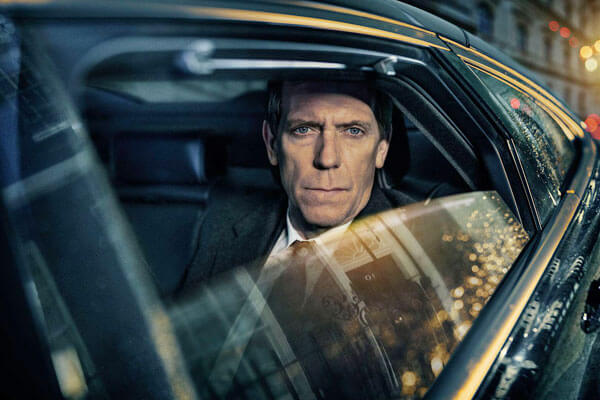 Hugh Laurie as an ambitious, cynical minister in a Tory government.

Hands up who likes a good political scandal! Nobody? Fair enough, we are kind of drowning in them. Hands up who likes a good political scandal on TV? A sea of hands! Well, fair enough, fictional politics can be fun, and cheering or booing fictional politicians is infinitely more enjoyable than cheering or booing the real thing. Actual politicians are much less photogenic and witty than dramatised ones, and they can literally kill us. Hands up who thinks the British do the best scandals? Keep the hands up if you like Hugh Laurie – the guy who went from being the comedy goon in Blackadder to being widely respected and wildly successful in his semi-serious role in House. Alright, your arms are probably tired by now, you can put them down.

Myself, I like a good small screen political scandal. Lenin said that bourgeois parliaments were “a means of duping the workers, and phrases about democracy are used to cover up financial swindling and every kind of bribery,” and it’s fun to see that sort of thing at least get some comeuppance even if only on TV.

Well, fans of screen UK political scandals and Hugh Laurie have I got a scandal or two for you!

Roadkill stars Laurie as an ambitious, cynical minister in a Tory government led by a terrifyingly bland female PM who seems to be trying to combine Theresa May and Margaret Thatcher. Laurie is a “man of the people” sort of Tory, who grew up poor and has strong opinions about how to reform the justice system (radically, especially for a conservative, he thinks they lock too many people up). As the series opens, he’s just survived a court trial for perjury because he’s been lying about his whereabouts whilst looking for some serious far-right money in the US. Luckily for him, a witness has been leaned on.

Another problem for Laurie is that he has a habit of being serially unfaithful to his wife and has a daughter he fathered with a supermarket cashier. The daughter is in that justice system as a prisoner. Naturally, the prison is run by a fairly evil private company who have no compunction in leaning on the daughter to get to her father. So the action is fairly evenly divided. Between a brave lawyer who was on Laurie’s defence team, but has a conscience, and the daughter’s troubles in getting in contact with her father and surviving the prison. Cameos are made by other members of Laurie’s troubled family; His two other daughters, from his marriage, who are traumatised by and hostile to their neglectful father, and a wife who’d like to pretend nothing’s wrong. What complicates matters is that one of Laurie’s daughters from his marriage won’t let matters rest, and insists on confronting her parents about Laurie’s philandering.

Will Laurie outmanoeuvre the PM? Will he survive the various potential scandals brewing? Will the plucky lawyer prove that he perjured himself? Will the press find out about his illegitimate daughter? What about the dodgy financial doings that depend on his wife’s cooperation?

The series is, in case you haven’t worked it out yet, a bit twee and quite contrived. For a start, at a time when PM Boris Johnson doesn’t know how many children he has, it’s more than a little old fashioned to ask us to believe that Hugh Laurie’s fictional daughter really needs to trouble his political career at all. It’s commendable, I suppose, that the lawyer who helped Laurie win his perjury case should care about finding out the real truth after that case is done and dusted but it’s also less believable than anything in “Harry Potter,” and this show doesn’t make me want to believe it. If that wasn’t enough, Laurie has even more on his plate romantically. Laurie has a mistress in Roadkill who played the Danish PM in the Scandinavian political drama Borgen. She is dissatisfied with her role as Hugh Laurie’s occasional bit of “stress relief.” And while it is completely plausible for a self-serving MP to have “a bit on the side,” it is less plausible that every other minor character in Roadkill is having it off with another minor character in between dramatic revelations. You start to wonder if there’s something in the English water supply!

Another thing which makes Roadkill nowhere near the treat that the original UK House of Cards was, is that the script, by respected British playwright David Hare, often seems designed for the stage rather than the screen. Time after time, characters deliver lengthy monologues at each other which would have a theatre audience applauding or at least nodding admiringly, but which in real life and, more importantly, in modern TV, someone else would interrupt. We are long past the days when TV was mostly just stage plays on video. Roadkill had me thinking: Hare should go and write more stage plays and leave television to someone who knows there’s a difference between the two.

So will you enjoy it? Well, it’s not all bad news. Hugh Laurie is very convincing as a politician who still has a resentment of the born-to-rule types who dominate British politics and especially the Tory party. It is refreshing to have a main character who isn’t simply evil or nice, but three dimensional.  There’s a fair amount of suspense as we wonder if one of Hugh’s various scandals will trip him up, and if he’ll get away with it all somehow. The series is screaming for a sequel, with large amount of plot threads still unresolved at the end – it could only be more sequel begging if they tied Hugh Laurie to some railway tracks and left the viewer with credits reading “To be continued …” at the very end.

All up, I give Roadkill a six out of ten and commend it to viewers who have already finished Borgen and don’t have the energy to go and find the original House of Cards.