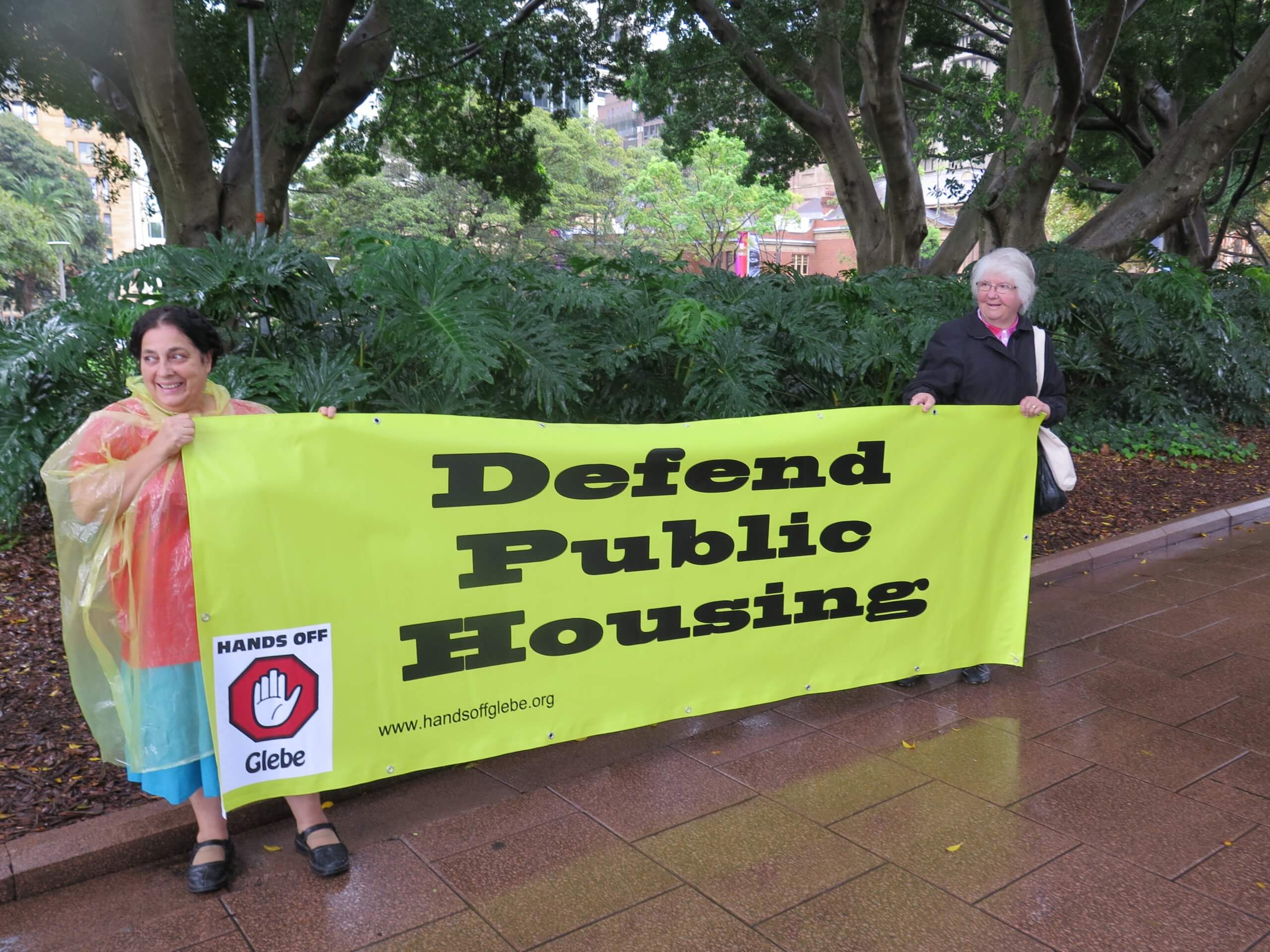 Hands off Glebe, a small community group campaigning for public housing, had organised the March for Maintenance (March 27, 2014) which was expanded to include the fight to save Millers Point, a historic Sydney suburb the NSW Liberal government wants to sell off to the private sector.

A wide range of groups has come together in a campaign to stop NSW Government housing “renewal” plans in Glebe and South Everleigh in Sydney.

Representatives of public housing residents, the Greens, Young Labor, Port Jackson Branch of the Communist Party of Australia, the Glebe Society, Sydney University SRC, the Socialist Alliance, Friends of Erskineville, and Millers Point activists are all supporting the campaign launched by Hands off Glebe Inc (HoG).

“Firstly, we want to reverse the decision to demolish the public housing and destroy the communities in the Franklyn-Bay Street complex and at the Cowper Street-Wentworth Park Road site in Glebe and at Explorer Street in South Eveleigh.

“Secondly, we are working to stop the State Government policy of bulldozing public housing and replacing it with seventy per cent private units with the profits from the sale of public land used to fund thirty per cent public housing.

“We want a government-funded construction boom of 5,000 new public housing and affordable homes each year for the next ten years.

“This would be a good step forward but it is nowhere near the actual number required to make sure people who need it have access to housing they can afford.

“However, it would meet the twin policy goals of stimulating the economy and providing permanent homes for the vulnerable. Investment in public housing is one of the most effective options for boosting the economy,” Denis Doherty concluded.

“The Berejiklian government wants to bulldoze my home and replace it with seventy per cent private units with the profits from the sale of the land used to fund thirty per cent public housing. We will not accept this,” said Emily, a public housing tenant in the Franklyn-Bay Streets complex in Glebe.

“The idea that you can ‘sensitively manage’ evicting tenants like me and my neighbours who have lived here for up to 30 years is ludicrous. […]

“We’ve been told that we can return once the redevelopment is completed if we want to but this is not true.

“The Land and Housing Corporation admits that larger families will not be able to return because there will not be large enough properties built for them,” Emily explained.

“There is nothing wrong with the present set up, which gives us green spaces and privacy. There is not a great deal of traffic in Glebe Street at present and no need for separate bike lanes or pedestrian ways. Leave well alone

“The real cost of this ‘renewal’ is the human cost of community displacement and in some cases forced relocation which disrupts our support networks and social structures.

“Evicting us and relocating us often has serious effects on the physical and mental health of public housing tenants,” Emily stated.

“The plans are another disgrace brought to Glebe by this government intent on serving the rich at the expense of the poor.

“Housing really should be funded as an essential service, like health and education.

“In many countries today funds are invested in public housing to support sustainability, economic stability, and social cohesion. It is time the NSW government followed the same path,” Emily concluded.