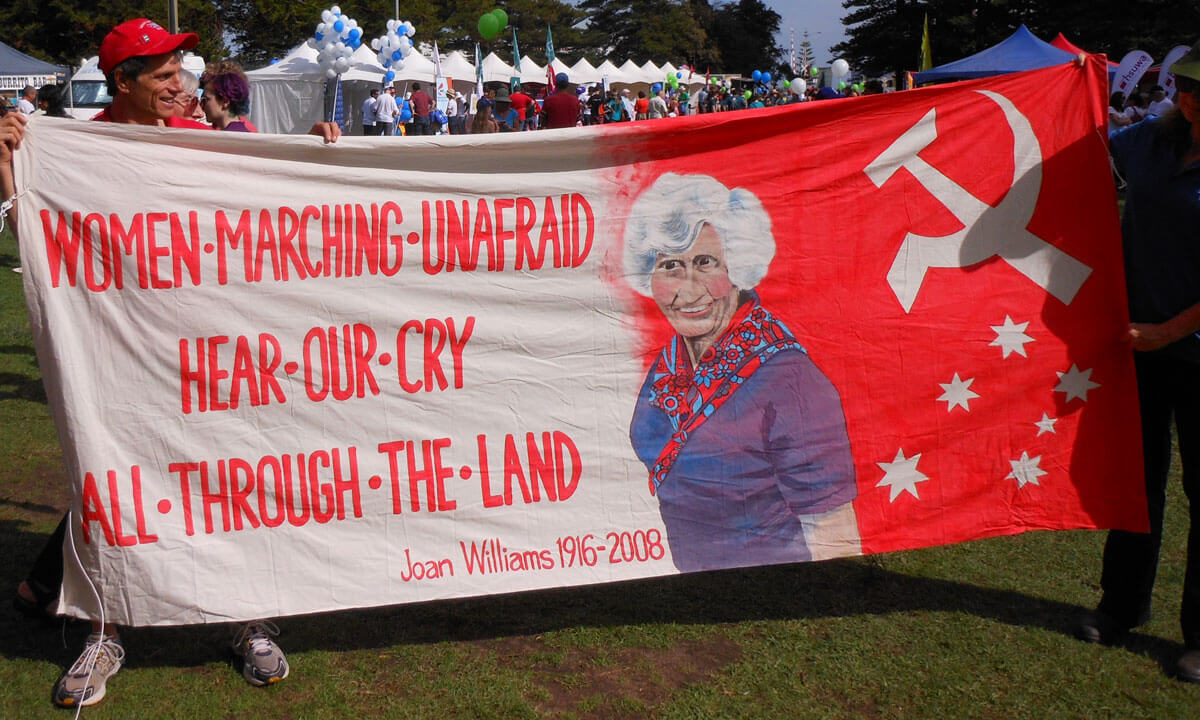 Red Women is a series of biographies of revolutionary Australian women entered in a competition organised by the Communist Party of Australia as part of the Party’s centenary celebrations. On the occasion of International Women’s day the Guardian has published three of those entries on pages eight, nine, and ten. The full set of entries is a available in a pamphlet from the CPA. To order your copy write, email or phone the CPA: 74 Buckingham St, Surry Hills, NSW 2010; info@cpa.org.au; 02 9699 8844.

When awarded the Order of Australia medal in 1996, Joan Williams accepted it on behalf of “her unrecognised sisters who serve the community.” So perhaps it is fitting she takes her place among other communist women in this Red Women Celebration to mark 100 years of the Communist Party of Australia.

Coming from the regions in Western Australia, Joan was born in Coolgardie in 1916. Growing up in Kendenup, Joan became politically active at a young age in the 1920s.

The secret of what motivated her along a path in activism is most likely archived among her many writings and poems. Did her political consciousness lead her into journalism, or is that where it developed? Perhaps those who knew her well give us an inkling. One friend described her as a woman with a genuine interest in people, a great communicator and thinker knowing from a young age what was important in life and ahead of her time.

Whatever came first, as a young journalist, she surrounded herself with left-wing thinkers, other journalists, writers and artists. With an already developed political consciousness, Joan found a friend and mentor in Katharine Susannah Prichard and in 1938, founded the Modern Women’s Club with her. They became lifelong friends with mutual respect of each other’s work.

In 1965 Katharine chose Joan to edit her book On Strenuous Wings, a collection of her works.

Out of her commitment to bringing about social change, Joan joined the Communist Party of Australia in 1939. She quickly took up many struggles playing a leading role in the West Australian and national political scene, and through her writings and poetry internationally. She did this under her pen name Justina Williams, writing short stories, historical works, poems, biography and autobiography.

As a political leader Joan was passionate about peace, social justice, equality, indigenous rights and protection of the environment. She was well recognised in her early activism as a champion for women’s equality and maintained a lifelong commitment to it. Joan not only played a role but was a leader, founding several committees and movements.

She was a member of the International Women’s Day Committee, on the West Australian Council for Equal Pay and a founder of the Women’s Electoral Lobby and a member of the Union of Australian Women. She stood up strongly against violence against women and for equal opportunity. She also fought for a woman’s right to abortion, going as far as describing her own experience in detail to thousands at a rally.

At the same time, she further ramped up her leadership of the environmental and peace movements campaigning for nuclear disarmament, against the presence of the US military base near Exmouth, for peace and against war. Her rage showed in her many writings, and her poetry packed a punch. Her poem “Not in My name,” written during the first Iraq war in 1991, was adopted internationally and can still be heard being recited at peace rallies today.

She maintained the struggle for peace throughout her life and by 1980 was the Secretary of the Australian Peace Committee.

In her autobiography, Joan, referring to a time in the ’70s, gave a personal perspective to the working-class struggle and struggle for women’s rights saying:

“A new generation had come into action and we who had struggled in the past were with them. Strangely, they knew little of the patient work, and the sacrifices of earlier workers for equality, who for years had been chipping away at male bastion.”

“[…] they eagerly learned of the struggles of the suffragettes in England, as if there had been nothing in between.”

Joan posed the question: “How was it that they knew of Alexandra Kollontai, but not of strong Australian women whose courage had opened doors to the unions and professions, the radical activists in whose steps we were treading today?” So, it is essential then that her story and those of other Red Women be told.

Her life took her from Coolgardie, Kendenup, Melbourne, Moscow, London and Albany and finally Perth, where there is a park named in her honour to acknowledge her time as a Councillor from 1973-77. Joan married twice, firstly to fellow journalist Peter Thomas and later to fellow communist Vic Williams in 1946, and together they led the Perth branch of the CPA.

Joan was a mentor to all in the CPA WA branch, mentoring younger members to take on roles such as treasurer for the Communist Party of Australia’s continuity in Western Australia.

After her death in 2008, the CPA WA branch paid its respects to Joan as a true communist who dedicated her life to the working-class struggle.

A life well lived that should be an example for all of us who strive to bring about a better world.

Not in My Name

Not in my name,

Not one drop of blood be shed for oil

That makes some billionaires and sets the Middle East aflame…

But in my name,

Of the black and dispossessed,

Warships and bombers turn around.

Peace in my name.