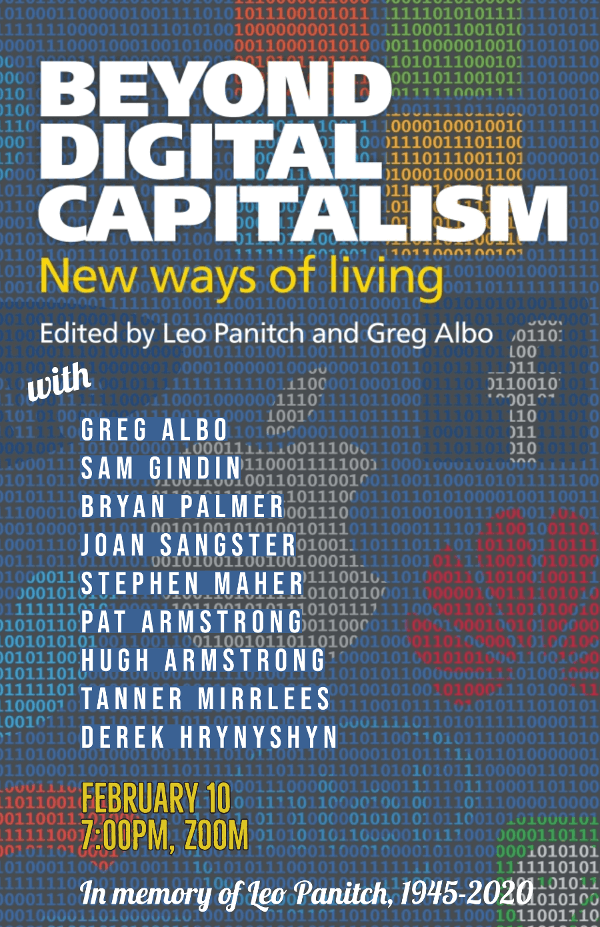 Only a socialist publication could, in the midst of COVID-19, expose “for all to see the severe consequences of longstanding neoliberal state practices” and take on the challenge of capturing the significance of the pandemic and what it spoke to in terms of imagining, struggling for, and planning for, new ways of living. The editor’s preface, with brevity, reviews the contents of the seventeen articles, which make up this 330-page book, and outlines how each article connects and builds upon each other and thus contributes to, and responds to, the book’s above-mentioned purpose. This also includes “addressing how far digital technology has become integral to capitalist market dystopia” (the subject of last year’s Socialist Register). It is a joy to join with the editors in “seeking to counter […] facile futurist ‘cyber-utopian’ thinking” and sneer at (and expose) the gross profits and actions of high-tech corporations.

First up, Ursula Huws streams the reader through the “Kafkaesque world” of digital technology for workers but reminds us not to abandon the struggle as more people in the US organise and protest, and new unions form in the UK. The last sentence of her article states, “Sow the wind and reap the whirlwind.”

The book’s editors note that the next three articles seek to locate “today’s digital capitalism within the history of technological change […] [and] revalidate the centrality of working class struggle as socialists try to “look beyond techno-determinist and capitalist futures, and seize the virtual as well as the physical means of production.” In addition, my reading of the articles sparked thoughts about time as a weapon, along with the relevance of how we ascribe descriptors, affecting the understanding of what is being described. It reminded me of the first lesson I learnt when I encountered computers some 34 years ago – “garbage-in, garbage-out.” The references to great thinkers and the use of statistical evidence in these and nearly all the books articles will greatly assist all good students of Marxism.

Grace Blakeley’s “The Big Tech Monopolies and The State” is an effortless, hence enjoyable, read that concludes with the observation that “democratic planning […] requires much more than beefing up economic regulation and setting up state investment banks […] it requires the nationalisation of monopolies and the socialisation of finance.” With some 4.5 bil people using the internet in 2020, Tanner Mirrless gives us an extensive list of websites and the like of interest and often by socialists whilst pointing out that “while digital platforms are enabling socialists to communicate in ways that were not possible in the pre-digital world of mass media, they are supplements” to socialist agitation and organising. Needless to say, the contradictions of the internet (ownership, state surveillance etc.) are discussed, as they are in Derek Hrynyshyn’s article, which, like previous articles, reminded me that the “computer,” like all machines under the capitalist mode of production, will drive the tendency towards monopoly. Hrynyshyn does explore propaganda and concludes that “everything required already exists to reorganise our communication systems to support collective discussions as a public good […] [which is] imagining a plausible alternative,” i.e. socialism.

Trying to comment on Massimiliano Mollona’s “Working-Class Cinema in the Age Of Digital Capitalism” probably reveals more about this reviewer, for at the end of the article I concluded that I am, as many have suggested, a bit of a philistine or maybe just an alienated (disconnected) spectator. Moving from theatre to fashion, with “From Neoliberal Fashion To New Ways Of Clothing,” makes a clear argument for workers control within a planned economy. And in between these two articles, Joan Sangster brings focus to the surveillance and struggle of “aesthetic labour” and, amongst other things, reminds us that “privacy has never been equally enjoyed by all citizens, as workers, the homeless, criminalised, marginalised, and the welfare recipient can attest.”

“Shifting Gears: Labour Strategies for Low-Carbon Public Transit Mobility” by Sean Sweeny & John Treat, and Benjamin Selwyn’s “Community Restaurants: Decommodifying as Socialist Strategy” are two articles that Greens and Australian Labor Party activists will find useful in promoting progressive policies within their own parties. Highlighting the tragedy of privatisation of aged care, Pat and Huw Armstrong set socialist principles that should be applied to the sector. Equally applicable to the Australian context is Pritha and Pratyush Chandra’s “Health Care, Technology, and Socialised Medicine.” Though not referring to Australia, we nonetheless gain a sense of the forces at play before and after Medibank (introduced under the ALP Whitlam government) and the scourge that is the “Medical-Industrial Complex” globalisation. COVID-19 has shown “that capital transforms every crisis to an opportunity” but also as a counter, the need for socialised medicine which “is about the reappropriation of the general intellect (knowledge, and its objection in machines and techniques) by society, for society.” To this end, Pritha and Pratyush “talk in terms of the collectivity of health workers and their self-government”; a worthy challenge to all the health and health-related unions (which includes the Australian Medical Association, specialist associations etc.) here in Australia.

Christoph Hermann’s “Life After The Pandemic: From Production for Profit to Provision for Need” reminds us that “solidarity promotes equality […] and [a] focus on the maximisation of use-value.” “Democratic Socialist Planning: Back to the Future” by Robin Hahnel will bring a smile to many an old communist. And finally, the last article by Greg Albo is described in the preface as an “examination of the extensive literature on ‘postcapitalism’ […] [and] how important it is … to offer signposts rather than detours to a democratic socialist future.”

Like so many books, articles and discussions that I engage with, I am reminded of the importance of being an active student of Marxism and connecting with living socialist political organisations.