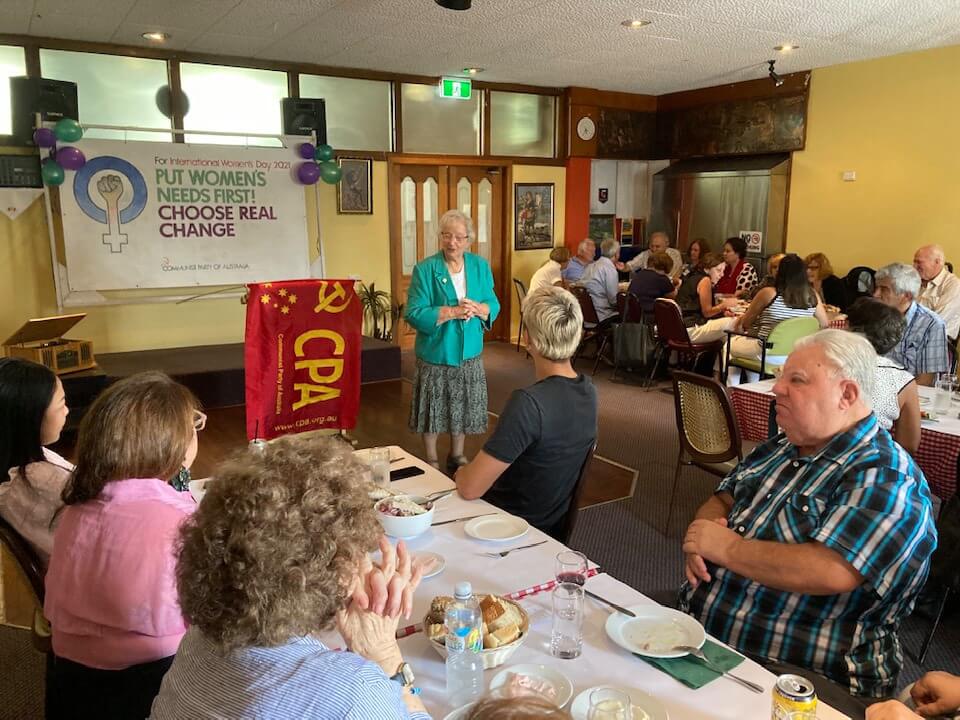 At 1:00 PM on Sunday the 7th of March over fifty members and supporters of the Communist Party of Australia gathered at the Greek Orthodox Community Club in Lakemba to commemorate International Working Women’s Day (IWWD). A banner with the slogan “Put Women’s needs first! Choose real change!” formed the backdrop to the occasion which was marked by speeches, songs, and lunch. This event was organised by the Inner-West branch and endorsed by the Sydney District Committee of the Communist Party of Australia.

IWWD was first initiated in 1910 by notable revolutionaries including Clara Zetkin and Rosa Luxembourg. It later rose to great prominence during the February Revolution that led to the collapse of the Russian empire and opened the way towards the socialist revolution that led to the establishment of the first socialist country, the Soviet Union. IWWD was celebrated throughout the socialist countries as a public holiday and is celebrated by the International Communist Movement. In 1975 the United Nations declared the year the “International Year of the Woman.” This contributed to IWWD being recognised and adopted by the capitalist west, although dropping “Working” from the day name as a sign of its bourgeois co-option. It was noted that many of the demands put forward and struggled for in 1975 for winning gender equality are still the demands of the movement today.

Comrade Dorothy addressed the assembled guests in a speech that analysed the exploitation and oppression experienced by women today. This oppression arises from capitalist property and social relations, and the ultimate solution can only be found in winning a socialist society. The insidious effects of the bourgeois agenda were exposed in how women’s issues are discussed in the “mainstream” media, where “Public debates concerning women’s rights and needs assume we have reached an ideal society where questions of rights and needs are not effected by class interests.”

However, women’s issues are truly the issues of the working class. In Australia today the overwhelming majority of women are not preoccupied with getting a place on the board of BHP or Fairfax media, they are much more likely to be hoping that their casual or insecure work will still be there next week, next month or next year. Representation on corporate boards can hardly truly matter when women that win these tokens of gender parity “have been co-opted to serve the class interests of big capital”. These capitalist interests invariably deny women their basic needs, continually degrade advances previously made and siphon profits out of education and healthcare services which has ruinous consequences on the lives and families of working people. This trend is exemplified with the widening social and gender inequality intensified by the COVID-19 pandemic. “Free childcare, quality free education from pre-school to university and a health system that does not ask if you are privately insured before it decides how to help you”, housing, job security and equal pay for equal work are measures that would have a far greater liberatory impact on the lives of women then token measures of elite representation.

Following this speech, Comrade Sylvia sung Bread and Roses and a song written by CPA members in the New Theatre in the 1950s that agitated for equal pay. International Working Women’s Day is a day that calls all working-class militants to strengthen the struggle for gender equality. There is no choice for women who want equality and a better future for themselves and their families. The only choice that will realise equality and the satisfaction of women’s needs is socialism.