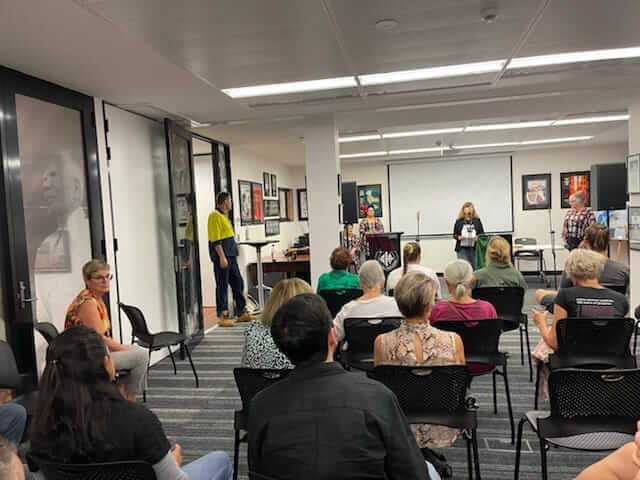 IWD 2021 was celebrated in Perth at Perth Trades Hall on Monday, the 8th of March. More than sixty people gathered at the event which was jointly organised by the CFMEU, TWU, and the CSIRO Staff Association.

The celebration was chaired by Michelle Sheehy organiser with the CFMEU, who welcomed the attendees, speakers and the Android Sisters who performed their songs, including the very relevant “Bread and Roses.”

A short film on the history of International Women’s Day and its socialist roots was shown to remind people of the true significance of the day and its relationship to working class struggle. The film started by raising concern IWD had become a Mother’s Day equivalent in some circles and that we must reclaim its roots.

Three speakers, Cheryl Davenport, Rebecca Cassells, and Trish Todd spoke passionately about the journey for women’s equality over the past five decades. The presentations focussed on the struggle and the hard walk that continues towards equality in a society dominated by men and where much needs to be done if we want a better world. This was illustrated by Davenport who outlined how it took nine years for her bills to decriminalise abortion to become legislation in Western Australia. This she had to introduce as a private member’s bill after she wasn’t able to get support from her Party colleagues.

The speakers celebrated what has been achieved but stressed the importance of being organised with both working class men and women coming together in the struggle to achieve that better world.

During the event, It was also highlighted that WA is one of the worse places for women’s gender pay gap in the country. The pay gap is worse in those industries dominated by women.

The event was well attended by local Party members.