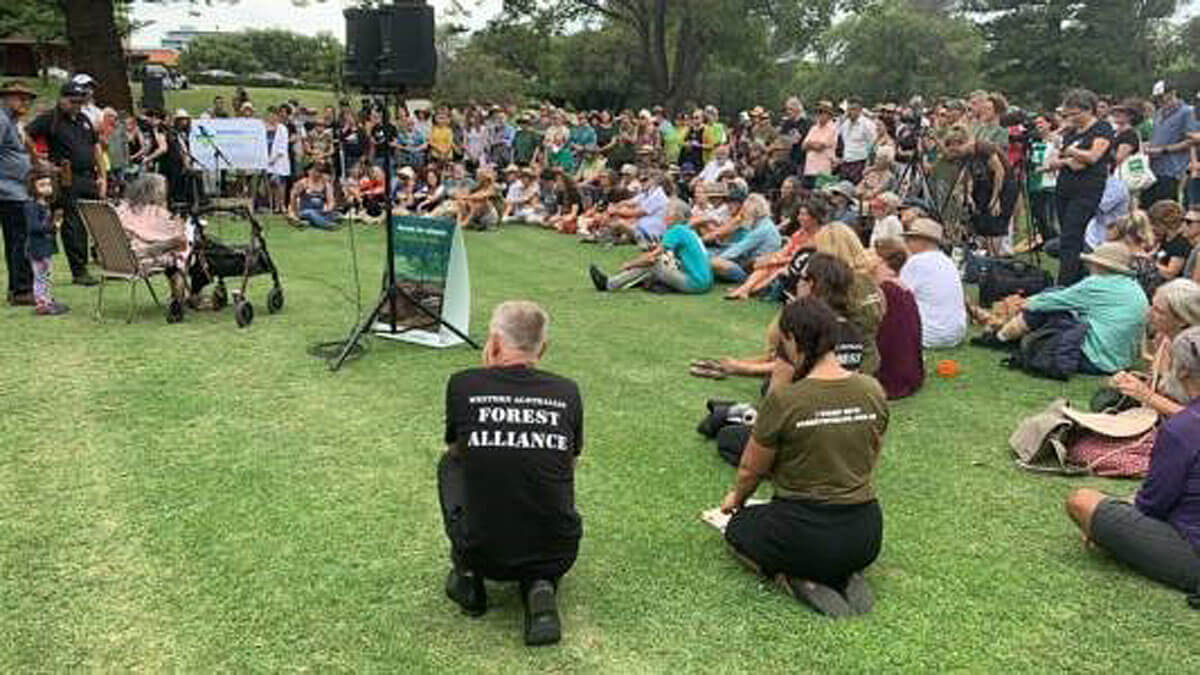 The WA Forest Alliance had a busy week, holding their Grand Postcard Delivery Rally in West Perth on Wednesday 10th March. Thousands of messages on postcards addressed to Premier of WA, Mark McGowan, calling for the forests to be saved, were hand-delivered to Dumas House.

The Grand Postcard Delivery event involved around 150 people of varying ages, including members of 350 Boorloo Perth, which augurs well for our future.

The following day, Thursday 11th March, the Australian Religious Response to Climate Change (ARRCC) – all my Quaker mates – led by Jo Vallentine, held a Global Day of Action for Climate Change on the steps of the Wesley Church.

Both events were linked by the belief that we must attempt to make Australians and their political representatives realise how important it is that we start caring for our natural environment if we have any hope of stopping what looks like the irreversible destruction of our way of life.

So many rallies I’ve attended have more than enough grey-haired veterans in tow, but hopefully the younger generation might actually have employment! It was good to see the numbers of Whadjuk Nungar people there, who spoke emotionally and sincerely about the unsustainable damage done to their land over the past 250 years.

Unfortunately, after an hour, I had to leave but later learned that Dr Fiona Stanley gave a very emotional plea for all native forests to be preserved. What a pity, not one TV station thought it worth being there.

As the secretary of the Independent and Peaceful Australia Network in WA (IPAN-WA), I also took the opportunity to hand out its brochure about “A People’s Inquiry” taking place in July, inviting organisations and individuals to make a submission about Australia’s involvement in US wars and the US-Australia alliance, which has sadly slipped off the agenda for discussion since the pandemic.

With the increasingly hostile trade war between the US and China, Australia has become the “piggy in the middle” and it promises to do further damage to our trade with China if we, once again, puppet-like, side with the US.

A much more sinister connection with the proliferation of the military worldwide – something not much discussed when talking about climate change – is the carbon emissions created by the US military. Barry Sanders, in his book, The Green Zone (2009) stated the US military consumes as much as one million barrels of oil per day and contributes five per cent of current global warming CO2 emissions. However, jet fuel emissions are likely to be three times higher per gallon than those from diesel and oil.

She goes on to comment that, if the US expends thirty-seven per cent worldwide of the global military budget and its military is estimated to contribute five per cent of climate change emissions, it can be assumed that the rest of the world’s military spending, weapons manufacturing, military exercises, and conflict combine to bring military-related fossil fuel emissions to near fifteen per cent of global climate change pollution. [See Environmentalists Against War website – www.envirosagainstwar.org.]

As IPANWA’s secretary, I’m very pleased to welcome anyone who is interested to attend our round table to be held on Saturday, the 27th of March at UCIC, Perth (the Uniting Church in the City) from 10.30 - 1.30pm. I can be contacted via email on eileenwhitehead24@gmail.com.