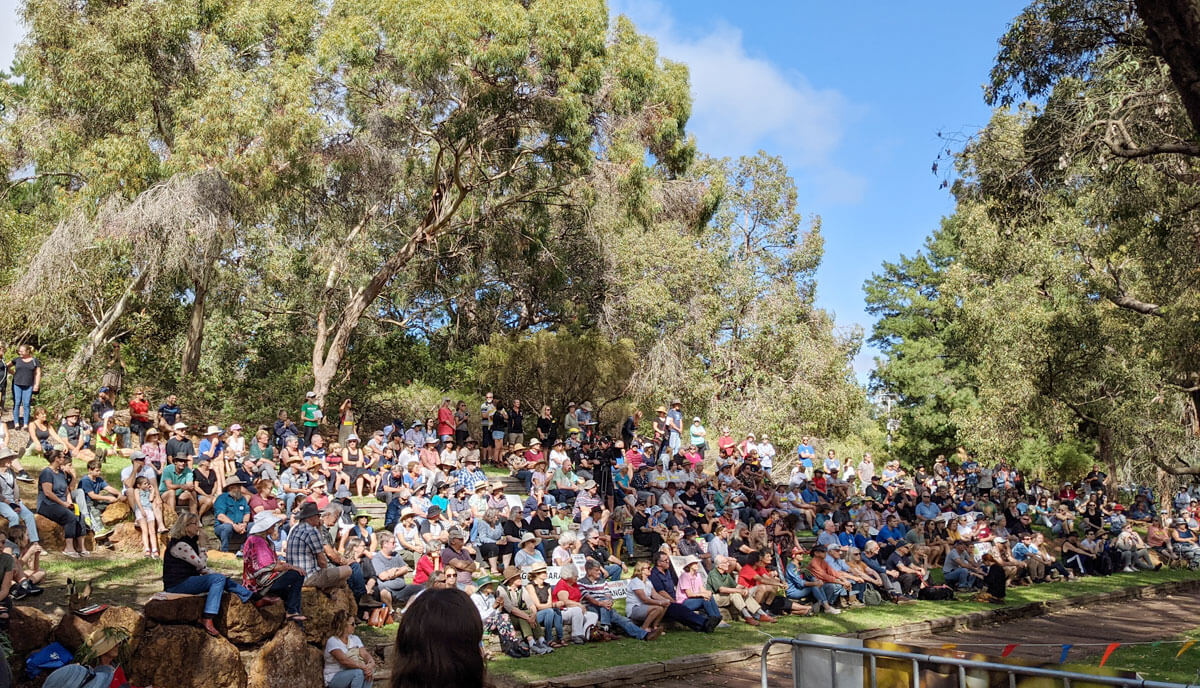 On a warm, sunny morning in the Perth Hills suburb of Mundaring 1,800 people gathered at Sculpture Park to rally against the proposal for a housing development at nearby North Stoneville. The developer is well-known property development magnate Nigel Satterley who is developing the property on behalf of its owners, the Trustees for the Anglican Church. The proposal involves developing 550 hectares of rural land, of which 200 hectares of bush would be cleared to build 1,400 homes to house over 4,000 new residents. Community opposition to the proposal is centred on its environmental impact and being a potential fire risk. The impact caused by nearby Wooroloo bushfire, which started on 1st February 2021, burnt through 11,000 hectares and destroyed 86 homes, was fresh in people’s minds. The proposal has already been rejected at a council meeting of the Shire of Mundaring attended by 1,200 people (a WA record for attendance at shire council meeting), as well as the Fire and Emergency Services Department and the State Planning Commission. However, the developer, who would stand to make a huge profit, has taken the rejection of the development proposal by the Planning Commission on appeal to the State Administrative Tribunal.

One of the co-presenters for the rally organised by Save Perth Hills was Jeremy Hurst, who owns his own eco-bed & breakfast in the hills and is a passionate opponent of the proposal and reminded the rally that the community opposition included the Mundaring Anglican Church who showed they were Christians in the truest sense, notwithstanding that the developers of the land were the Anglican Church hierarchy lead by Archbishop Kay Goldsworthy.

Environmentalist and Mundaring Shire President John Daw said there was also another development proposal in Parkerville that was over the road from the North Stoneville which sought to develop land for sixty homes in a cul-de-sac type plan which as has been shown in other similar plans, allows for limited escape routes from a bushfire.

Greg Rankin, a resident of Stoneville and a volunteer firefighter who had fought a number of shifts in the recent devastating Wooroloo bush fire, spoke to the crowd. He knew there were also people present at the rally who were victims of that severe bushfire. Rankin said the fire moved very fast – at times 5km/h with the wind pushing embers 3km ahead of the fire front. The fury of the fire caused canopies of the treetops to burn which in turn dropped smouldering leaves and branches on to the bush below. Rankin said there were also fire fighters who lost their homes but continued fighting the fire to save the lives and properties of others, while he also needed to console people who had lost everything in the blaze. Rankin said that although good rains came a week after the fire started and put out most of the fire, the ground was still very hot which caused the fire to restart. Some places where tree stumps were burning were measured at 400C. This meant the mopping up operation took over two weeks. The smoke from the remnants of the fire was still visible in Perth every afternoon until the end of February when four days of continual rainfall finally extinguished the last of the fire. Mr Rankin received a standing ovation as a firefighter – as a member of one of the more venerated professions in the era of climate change.

The speaker who followed, Stewart Guthrie of the Anglican Ecocare Commission, was the next speaker who risked opposition from the Anglican Church to deliver his message to the rally – they had even had a gag order put on the group by the church hierarchy to prevent them speaking out on the North Stoneville issue. His message to the rally was that if the development were to go ahead, it would be contrary to preserving God’s creation and the quality of life on this earth.

Greens Upper House member for the area, Tim Clifford addressed the rally to say the Greens fought to keep property developer money out politics as it fuels badly conceived property developments like the one at North Stoneville. The local Labor member for the area, Matthew Hughes was not present but one of his staff addressed the rally to say that Mr Hughes was against the proposal – though it would seem the State Planning Minister Rita Saffioti may not be doing enough to push the development off the planning board, which is what a majority of voters want.

The Communist Party of Australia supports the community opposition to the development proposal at North Stoneville which is well grounded on preventing fire risk, preserving the natural environment, bush character and biodiversity of a high-value natural habitat which flourishes in close proximity to the Perth metropolitan area.

check it out
Books & more ...
Shop@
Find out our ...
Policies
The Guardian can also be viewed/downloaded in PDF format. View More