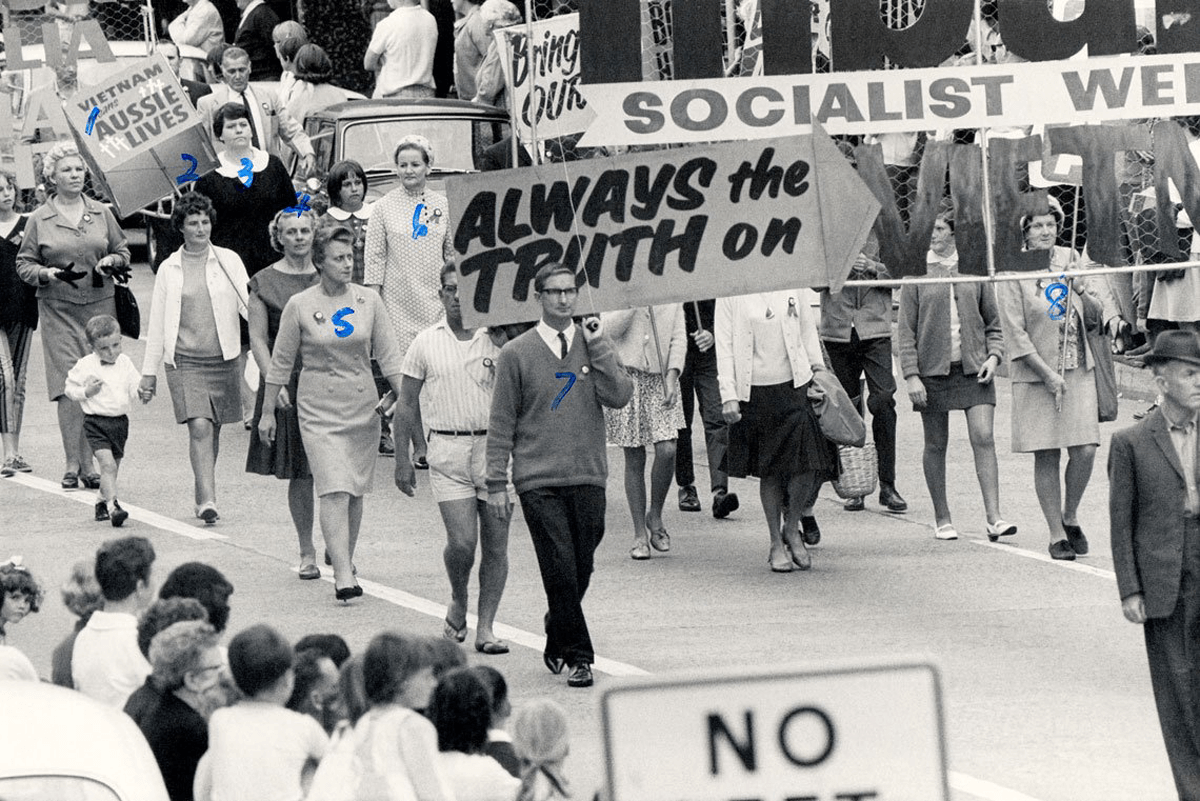 ASIO surveillance photograph of the 1968 May Day March in Wollongong.

ASIO Director-General Mike Burgess announced on Wednesday the 17th of March that the agency will be dropping the labels “left-wing” and “right-wing” extremism as well as “Islamic” extremism. The address included a strange combination of general back-patting for greater transparency, a call for recruits, and the strange reassurance that ASIO are not like spy agencies in the movies, but just your normal, “everyday” people.

The move from “Islamic” extremism to “religiously-motivated” is a welcome change, for it encompasses the rise in Christian fundamentalist attacks in the US and may also include attacks against minority religious groups. However, Burgess did not give a single example of a “religiously motivated violent” attack outside of Islamic ones (he did mention Christchurch but only in passing).

The grand justification of this change went as follows:

“Put simply, it’s because the current labels are no longer fit for purpose; they no longer adequately describe the phenomena we’re seeing. As an example, when thinking about the proliferation of violent groups that subscribe to various political ideologies, it’s unhelpful to categorise such groups as simply ‘extreme left wing’ and ‘extreme right wing’. ASIO does not investigate people solely because of their political views, so labels like ‘left’ and ‘right’ often distract from the real nature of the threat.”

In ASIO’s Annual Report 2019-2020, they stated, “extreme right-wing individuals comprised around a third of all ASIO counter-terrorism investigative subjects.” There is absolutely no mention of “extreme left-wing individuals” in the report. So, how does this change in language actually address “the real nature of the threat” which is decisively far-right?

Again, it is extremely telling that in Burgess’ address, there are no examples of “left-wing” violence or extremism. Maybe ASIO thought ANTIFA activists throwing milkshakes at far-right wingers, a briefly popular tactic in 2019, didn’t exactly make the grade.

What is clearly analytically useless about the term “ideologically motivated” is that Burgess includes within its scope incels (involuntarily celibate), a group of violent misogynists, as an example of an “ideology,” while completely ignoring the overwhelmingly right-wing demographic of that ideology. He instead stated that “We are seeing a growing number of individuals and groups that don’t fit on the left-right spectrum at all; instead, they’re motivated by a fear of societal collapse or a specific social or economic grievance or conspiracy.” Communists have always had a specific social and economic grievance: it’s called capitalism.

This shift in language completely obscures any concrete analysis of the real threat posed by right-wing groups. It also positions ASIO and other repressive arms of the Australian state as somehow neutral further obscuring their role as perpetrators of both systemic and direct violence.

Burgess insisted that “we do not investigate peaceful protests. Under law, we are only allowed to focus on demonstrations where violence is planned or likely. Non-violent protest is a component of a healthy democracy, not a threat to it.” The word “likely” gives ASIO a pretty broad scope of investigation. It’s pretty “likely” that there will be violence involved if a group of anti-fascist counter protestors show up to stop a neo-Nazi march. And it is extremely doubtful that the violence of a union demonstration getting busted up by police would grab ASIO’s attention.

As we’ve seen with the most recent uprising of neo-Nazis, the increase in racist crime both domestically and internationally, as well as domestic terrorist attacks, the right-wing has a particular monopoly on violence. It is a lazy centrist tactic to lump this in with alleged left-wing “violence.” This is made fully apparent by Burgess’ comment that “While the views advocated by many extremists groups are appalling, as a security service, ASIO’s focus is the threat of violence.” This generic understanding of violence is precisely what allows ASIO to treat two radically different positions as one in the same.

Genuine left-wing politics is built upon an entirely different ideological foundation than its far-right counterpart. The former works towards the emancipation of the working-class, in all its diversity, from the tyranny of capitalism and the state, whereas the latter seeks to build homogeneous ethno-nationalist states, or whatever strange new term they’ve invented to obscure their true intentions, through racially motivated violence.

ASIO’s shift in language only serves to obscure the real difference between the two positions. They have created a linguistic horseshoe theory which serves only to muddies the water of the popular consciousness by treating both ‘extremes’ of the left and the right as the same, while positioning themselves as the rational centre. We must not be fooled.