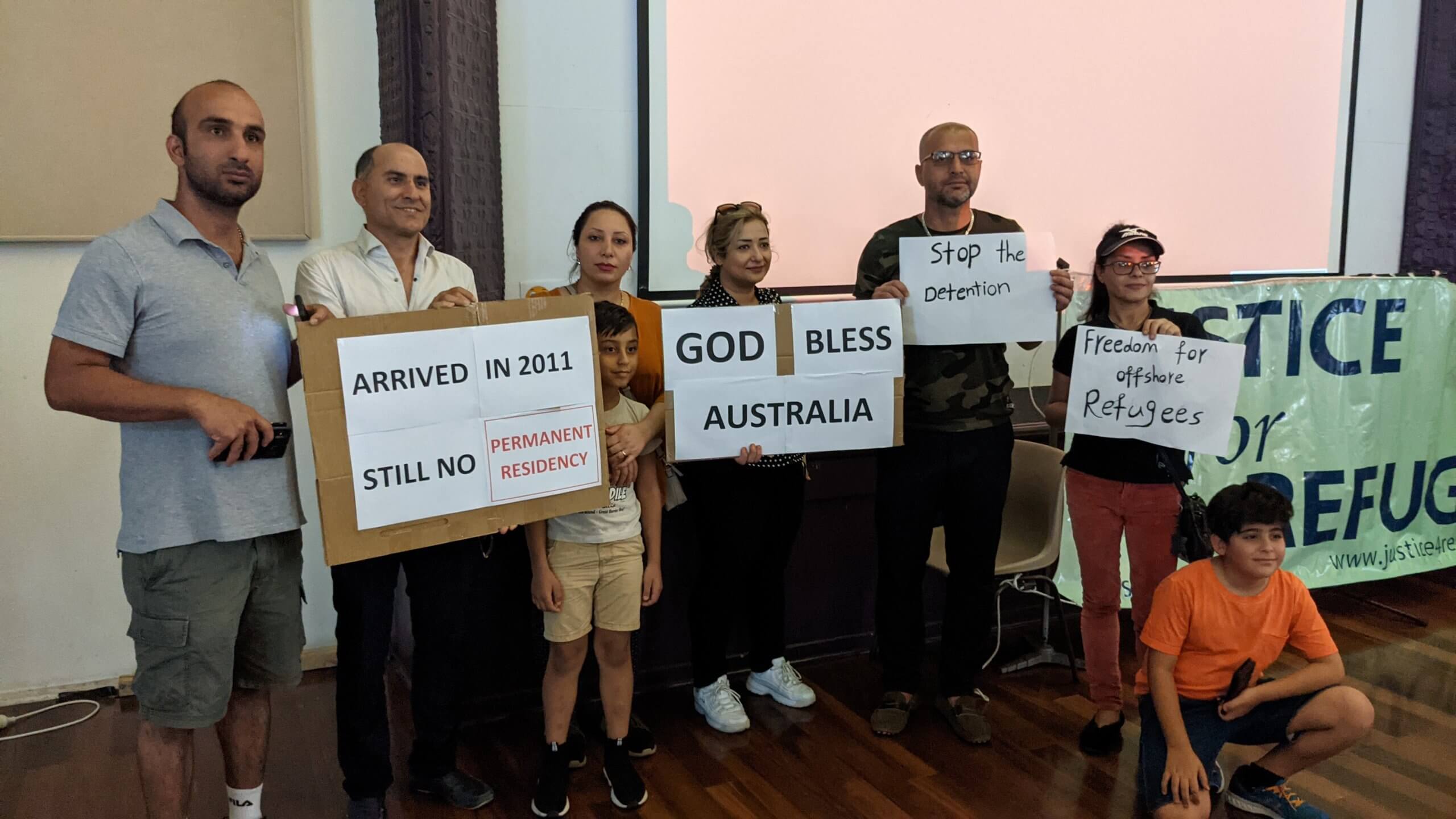 Impossible to satisfy the in excess of 500 people that normally attend this event, a seated event complying with physical distancing because of COVID saw about seventy people able to attend with an option to participate online.

Geoff Bice of the Uniting Church chaired the meeting and introduced various refugee and activist speakers online or at the physical meeting. One of the first speakers was Rohullah Hassam, a Hazara refugee from Afghanistan who was only recently allowed into the Australian community after years in mandatory detention. Hassam spoke via the internet from Melbourne as did the next speaker Abu Bakar, a Rohinga refugee from Myanmar. Abu Bakar, a stateless refugee, said after his eight-year ordeal with Australia’s mandatory detention system, “It was a mistake to come here on a boat.” Abu Bakar continued, “We have been moving through so many detention centres offshore and onshore.” Bakar asked the same question of himself that most refugees ask when confronted by the crushing, soul-destroying labyrinth of mandatory immigration detention system: “Why am I still in Detention and what have I done wrong?” Bakar observed that few people obtain Bridging Visas to stay in Australia.  Bakar ended up in hotel detention in Melbourne due to an accident on a motorbike on Nauru. He concluded by stating, “The Australian government is playing political games with our lives.”

Ali, another refugee from the persecuted Azara minority of Afghanistan, said that Afghanistan is not safe for his people. It was this that had led him to undertake the ordeal of a 43-hour journey in a small boat with ninety-five other people. Ali added that the situation of COVID-19 had only made things worse for those people seeking asylum because it limited free movement between countries.

Joanna Josephs, General Manager of the Centre for Asylum Seekers, Refugees and Detainees spoke in person, stating it is, “a dark reality for people seeking asylum in Australia.” Joanna posed the polemic of what happens when a government decides to return a refugee to a country of origin.  “No one is responsible if someone who is returned is harmed […] .”. It is demeaning and frustrating for refugees never knowing when their application for asylum would be finished. The current government has made the task of seeking asylum more difficult. They have reduced resources and cut budgets by eighty-six per cent for processing refugee applications. There are also many obstacles for refugees wishing to obtain work limiting their means to support themselves. They do not have access to Medicare or adequate health care and are frequently denied procedural fairness in their numerous and voluminous applications for asylum – 66 pages with 108 questions all in English! With the Rental Moratorium now lifted by the state government it will become even more precarious and difficult to house those refugees who have been released into the community. One of those refugees was Farhad Bandesh, a Kurdish refugee who lost eight years of his life going through the immigration detention process. He said he has just been released from his cage and now lives with a friend in the community and works at a winery in Melbourne. Bandesh said the Australian government needs to look after the rights of refugees which should be covered by international covenants. The Australian government is cruel, he concluded.

The Communist Party of Australia calls for an end to offshore mandatory detention and for refugees to be housed and supported in the community once they have passed all reasonable health and security checks and balances. Not to do so is not only be cruel and inhumane but has proved to be immensely expensive including spending $6 mil to house just one refugee family at the immigration detention centre on Christmas Island.