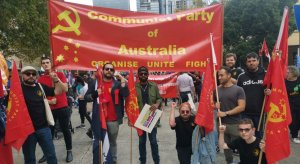 Demonstrators rallied on May Day to protest development plans at Willow Grove in North Parramatta.

The site would be dismantled and relocated in order to construct a second Powerhouse museum. A green ban could see Willow Grove saved. For the first time in its history, May Day was held in Paramatta instead of the city so that workers could protest the proposed move.

In a statement the Construction, Forestry, Maritime, Mining and Energy Union (CFMEU), outlined its desire to honour community concerns.

“These Green Bans mean no work can be done to destroy these historically significant sites,” said CFMEU NSW Secretary Darren Greenfield. “If the Berejiklian government wants work on the museum to proceed they need to sit down with the local community, listen to what they say and come up with a plan that preserves these buildings.”

A statement from the North Parramatta Resident Action Group echoed these concerns.

“It has become increasingly clear as reports and documents have become available under pressure from community, museum professionals and heritage experts that Parramatta is not getting the museum it was promised but a monster flexible event space with residential levels that will demolish our already diminishing heritage assets with Willow Grove and St Georges Terraces.” 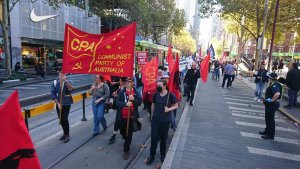 Since May Day is not recognised as a public holiday in Victoria, the Melbourne May Day rally is traditionally held on the first Sunday in May to allow workers and their families a chance to attend. This year rallies were held on both Saturday the 1st and Sunday the 2nd of May. On Thursday night, the 29th of May, a wreath laying ceremony was held at the eight Hour Monument on Victoria Street, followed by an international solidarity event at Trades Hall. The Melbourne branch of the CPA were in attendance at both of these events.

The Sunday May Day rally included speakers on various issues such as the right to unionise, independent foreign policy, proper, humane, and welcoming treatment for refugees and migrants, support for Australian First Nations peoples, and action on the climate crisis. There was also community singing, a BBQ, and various leftist organisations and unions in attendance. The March proceeded through Melbourne CBD, bypassing the State Library of Victoria and continuing up Bourke Street, concluding back at the Trades Hall on the corner of Victoria and Lygon Streets where more speakers were heard. The celebrations were well attended and a heartening show of working-class solidarity.

UnionsWA had already planned a parade for May Day where there was to be no speeches or chants but it took one COVID case and a 3-day state lockdown to end most May Day celebrations in WA.

Workers’ solidarity WA and the CPA revived the tradition of a May Day Toast some six years ago, and this year the event was again planned to be held at the workers’ pub 43 Below. While it was unable to go ahead, the CPA was determined not to walk away from this important tradition. With only a day or two to organise, the event went online.

Key note speaker historian Dr Peter Limb took us on a walk through the chequered history of May Day. He spoke of the influence of the CPA in shaping May Day in Australia and a rising militarism leading to bans. Numerous attempts were made to bury May Day such as using a shift to state Labour days. In WA, the MUA revived May Day as a militant action in response to banning CPA banners and encouraging corporate floats. Other guest speakers included Daniel Gasparri, Chargé d’Affaires in Canberra from the Bolivarian Republic of Venezuela. Gasparri expressed his solidarity with Australian workers. We stand in solidarity with the Bolivarian revolution and demand the end of the economic sanctions, said Vinnie Molina, convenor of Workers’ Solidarity WA. They toasted workers’ rights and demanded an end to vaccine profiteering and for the rebuilding of solidarity among workers in Australia and around the world.

2021 is an important year for workers’ struggles in WA with the 75th anniversary of the longest strike in Australia history that saw 800 Aboriginal workers from twenty-seven stations across 10,000 square kilometres stop work, starting 1st May 1946. Staying out for three years the end of the strike saw Aboriginal workers win the award wage and set the stage for future strikes like Wave Hill in 1966.

The Pilbara strike is an example to all workers that we win when we organise and dare to struggle. In WA, we were pleased in 2021 to toast to Unity, Peace, Solidarity and Collective action. 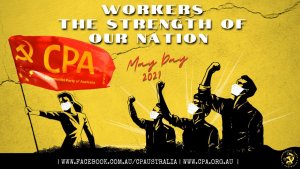