Article by the Maritime Branch of the CPA 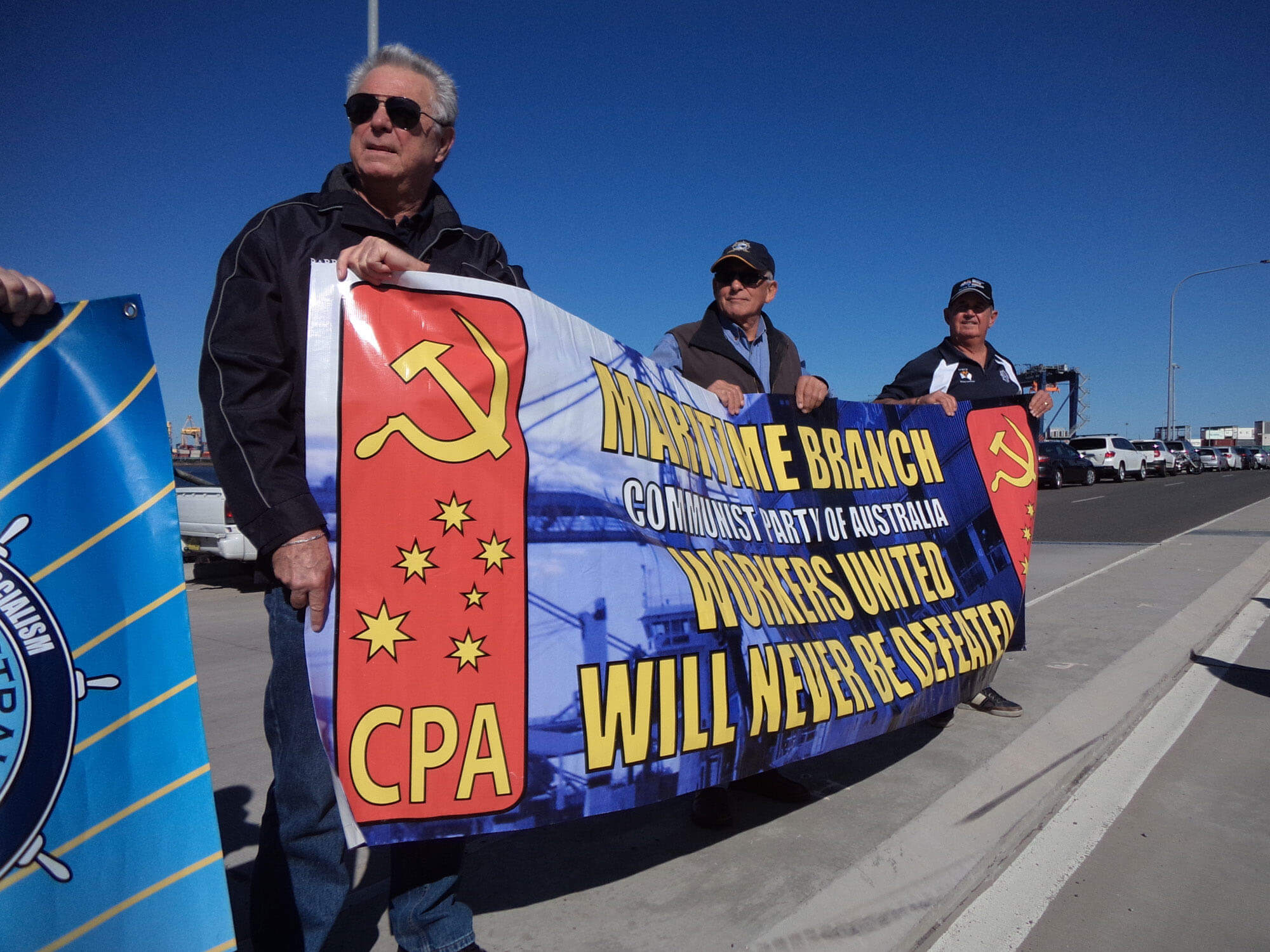 The waterfront has been in a significant struggle over the last three years. Industrial action has occurred at four terminal operators and across a number of bulk and general sites. One of the terminal agreements at DP World has been settled, with the Hutchison agreement reported to be close to finalisation. The two other terminal operators, VICT in Melbourne and Patrick nationally, are still in the process of struggle and negotiation.

The companies were defeated by a solid commitment by workers and the MUA to taking industrial action and fighting for claims.

The workers’ claims were mainly based on job security and protections from big industry threats such as automation. There were victories at both DP World and Hutchison on the issue of automation, with an excellent result at Hutchison forbidding the employer to make anyone redundant due to the implementation of automation and technology.

The first part of the wharfies struggle was characterised by constant legal challenges from employers around the right to take industrial action. Employers challenge your right to take action because collective industrial action works and moves employers to concede on issues they don’t want to give workers. The struggle and impact of your actions on their businesses make the boss move, which is the power that workers have in the workplace and society.

Further action is expected at VICT and Patrick, forcing wharfies and the MUA to have the same fight four different times due to the flawed and anti-worker nature of Enterprise Employment. This situation really brings to the fore one of the big problems for workers under Enterprise Employment.

Why can’t every wharfie be on the same agreement for the same work and negotiate conditions at the same time? The only answer is that this separation of workers is deliberate and planned and is designed to sectionalise and divide the actions of working-class people – even across the same jobs in the same industries.

We see this division of workers happening on the waterfront, one of the strongest bastions of unionism in Australia, causing the union and wharfies to fight the same battle over and over again. Imagine the difficulty in smaller and disparate workplaces and in other industries where workers are artificially separated by the anti-worker Fair Work Act.

It is thought-provoking to imagine the power and improved position of all workers in the community if they could act together to improve social wages and conditions. We would live in a better world where workers power and standards of living would be increased. This is why workers have been and continue to be socially divided by the ruling class and bosses. It is why neoliberal policies have removed protections, regulation, public ownership, and mandating the employer with total managerial prerogative.

The bottom line is we are placed in Enterprise Agreement cages which are a tool of the employing class. This process is ably supported by all major parliamentary political parties who have made a conscious decision to side with the interests of employers and big capital. Successive Australian governments have chosen to keep workers divided and have accepted that workers should have reduced bargaining power. That should be kept in mind when workers refer to the ALP as being “us” and “ours.” There is nothing further from the truth in this. The ALP, like the Coalition, has been captured by neoliberalism resulting in generally cosmetic differences between the two major parties.

This conscious decision by the ruling parties leads to the inevitable consequence of workers getting lower wages, increased flexibility, less family friendly arrangements and worse working conditions. The link between the interests of governments (of both persuasions) and employers is laid bare for all to see in this equation.

There can be no other conclusion reached than the Coalition, Labor, and all the employers are opposed to workers being in a position where they can improve their lives through struggle, which is the only way that workers have ever made any gains.

WHY UNIONS AND WORKERS MUST FIGHT ENTERPRISE EMPLOYMENT

The ACTU’s last campaign effort with Change the Rules correctly identified that Enterprise Employment is not working for the working class. Despite the correct analysis, the important campaign issue died with Labor’s electoral defeat. This is a flawed model of campaigning that arises when worker’s campaigns are limited to electoral outcomes. Once the election was lost, the movement drops off on what it had identified only weeks before as an issue of critical importance for Australian workers.

There needs to be a consistent approach to campaigning across the movement to continue the struggle against forms of employment that are negative for workers.

Political parties seeking the support of unions must also be held to account that they will repeal anti-union laws that sit at the heart of the transfer of wealth to the rich away from Australian workers.

On that score, the campaign needs to be as broad-based as possible, and its ongoing nature and determination must not be contingent upon ALP electoral success. It must become a campaign of the working class for tangible workplace reforms that improve the lives of workers. This campaign should also seek to move the ALP to a better position on industrial relations issues. Only the power of a united trade union movement and working-class campaign will move the ALP to a better position on workers rights. This has always been the case historically and overcomes many previous errors such as the co-opting of the broad united front Your Rights at Work campaign to electoral outcomes.

This approach deals with the clear lack of commitment by the ALP to deliver outcomes for workers when they win government. It is clear from history that the struggle and campaign must continue even when the ALP is in power.

The union movement has a continued reluctance to tackle the ALP in government which needs to be addressed. The ALP is not the union movement, and it is not a workers Party. Workers’ parties don’t adopt capitalist neoliberal policy solutions to every aspect of society, nor do they actively promote policies that transfer wealth to bosses away from the working class, nor do they send Australian workers to war for the imperialist ambitions of foreign powers. They don’t support undemocratic, authoritarian, union-busting institutions like the ABCC either.

Many ALP members feel equally betrayed by the implementation of neoliberal policies by their party, policies put in place without their agreement but in the interests of their class enemy. The bureaucratic leadership structures of the ALP need to be clearly differentiated from the good comrades in the ALP who support their unions and fight the employers on a daily basis. It is vital that they are part of this working class campaign aimed not at any particular party but carried out solely to develop the position of the working class and their unions.

While the CPA advocates for the broadest working-class campaign, the anti-union laws will continue to exist, and workers will be forced to fight against the slide in wages and conditions prepared for them by their bosses.

The only answer is to continue to fight. Even in our EBA cages, we must continue to fight, as wharfies can attest. We must link these various struggles together with the most important word in the vocabulary of the working class: solidarity.