New insights into the Stolen Generations 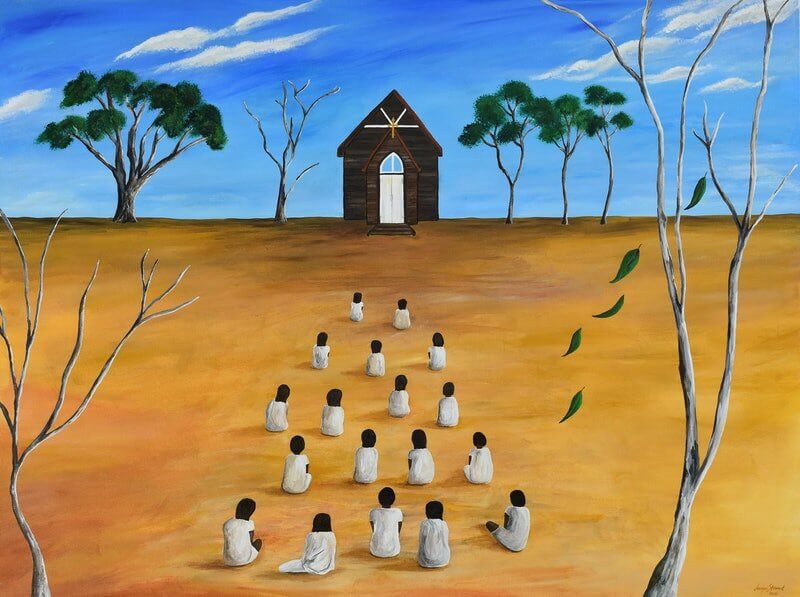 A recently updated report released a staggering increase in Indigenous people disclosing themselves as Stolen Generations survivors. Since 2018, the number coming forward born before 1972 has almost doubled to 33,600, suggesting that many more First Nations people are willing to share their experiences. The data collected amongst the Stolen Generations demographic over 50 years old revealed that economic circumstances, health outcomes and health risks were worse for them than those of Indigenous people who were not removed from their families as children. Although the Stolen Generations is often discussed through a historical lens by mainstream dominant powers in Australia, the reality is that even today, Aboriginal children are 9.7 times more likely to be removed from their families than non-Aboriginal children, and over 23,000 live in out-of-home care.

The 2021 report, Aboriginal and Torres Strait Islander Stolen Generations aged 50 and over: updated analyses for 2018–19 provides a clear indication that Indigenous children suffer more as a result of being removed from their families. The analyses showed that they were more likely than Indigenous people who were not forcibly removed to be receiving welfare, experiencing discrimination, suffering from a severe disability, living with poor mental health, and identifying as a smoker. Results from the research also indicated that almost ninety per cent had not completed Year 12 schooling, and the majority did not own a home.

It is encouraging that more Aboriginal and Torres Strait Islander people have felt comfortable enough to reveal that they were victims of the Stolen Generations but the sudden spike requires more analysis to understand the reasoning behind it. Fadwa Al-Yaman, spokesperson for the Australian Institute of Health and Welfare (AIHW) suggests that it is just a matter of time and willingness, however, as First Nations people continue to struggle for sovereignty and receive more recognition, it may be paving the way for more Indigenous people to explore their identity and share their experiences.

But more exposure does not necessarily mean Aboriginal and Torres Strait Islander people are receiving better outcomes for their children now. As of June 2020, 23,344 Aboriginal children were reported to be living in out-of-home care, which makes up for thirty-seven per cent of all fostered, adopted or institutionalised children in Australia. With the recent report showing the negative consequences for those removed from their family, it is likely that similar outcomes could occur for these young people in the future.

This current situation can be attributed to the Howard’s Northern Territory intervention which was implemented in 2007 and carried on into the Rudd years. Rather than addressing children’s issues in the Northern Territory by supporting communities in poverty, the blame was directed at Aboriginal and Torres Strait Islander people.

Howard’s attacks on First Nations people included the discontinuation of Aboriginal and Torres Strait Islander Commission (ATSIC), the abolition of the self-determination policy, the abandonment of the Reconciliation movement and the Native Title Amendments Act, and in his final blow, an intervention, which would result in land seizures, and a sixty-five per cent increase in Aboriginal children being removed from their home.

This was a racist and colonialist project which refused to acknowledge differing cultural practices along with the intergenerational trauma, poverty, discrimination, and First Nations disconnection to land and culture. The intent was not to protect children but to pave the way for new uranium mines and transport routes, essentially destroying families and homes to dig up natural resources. The foulest part of all is the illusion of benevolence – that the white man was coming in to protect Aboriginal children.

In sections of the Australian public, a commonly held myth pervades that children who are taken from these homes are given better opportunities; the countless horror stories from the Stolen Generations and the health outcomes tell a different story. One First Nations Stolen Generations man, James “Michael” Widdy Welsh recalled a place “like a concentration camp” – being flogged with a cane, given numbers, having his clothes burnt, and experiencing sexual and mental abuse. He recalled being forcibly taken from a “beautiful life” with his seven siblings in northern New South Wales.

Another survivor, Netta, spoke of being coaxed with a tin of apricot jam away from her mother by a police officer and being forced into an institution in Alice Springs to be trained to work as a domestic servant. She described being treated like an “inmate” and “like bullocks in a paddock.” Some were adopted into loving families but would often wonder where they really came from. Maree Lawrence described how her school friends would call her “Blackjack”, and that she still suffered for years wondering what life could have been like, disconnected from her own culture.

The new report also detailed a greater proportion of female Stolen Generations survivors, who Jens Korff, author of Creative Spirits explains as an outcome of a strategy of the white Australia policy to “breed out Aboriginal genes” by encouraging Aboriginal women to marry white men.

The forcible removal of children is not uncommon in settler-colonial states like Australia: take Canada, for example. 215 bodies of Indigenous children were recently found buried at a former institution in British Columbia. Survivors described how they were beaten and verbally abused, and others across the country are expressing their harrowing experiences in other schools. It is predicted that up to 6000 Indigenous children have died in these institutions across Canada. The Canadian government has since admitted to “race-based genocide” against its indigenous people (see Grave containing 215 Indigenous children evidence of Canadian genocide).

Australia’s government refuses to take responsibility for the ongoing discrimination towards Indigenous children and families. Although Kevin Rudd delivered an apology at federal parliament in February 2008, the interventionist policies continued to remove Aboriginal children from their homes at an increasing rate. For this reason, the apology has often been criticised as disingenuous.

The Secretariat of National Aboriginal and Islander Child Care (SNAICC), offers a consultation guide to address the over-representation of Aboriginal and Torres Strait Islander children in out-of-home care. Rather than deceptive and discriminatory policies, which can lead to worse economic and health outcomes in the long-term future of the children involved, their strategic plan aims to support Aboriginal and Torres Strait Islander families across the country and reduce out-of-home care where possible. One of its biggest priorities is to address and change parts of the National Framework which were decided in the absence of First Nations people – particularly around the purpose of protection systems.

Indigenous communities deserve to be consulted on these matters and recognised for their unique circumstances. Until then, the Stolen Generations cannot only be described as a moment in time but as a continual process of discrimination and colonisation.