An interview with ambassador Izzat Abdulhadi 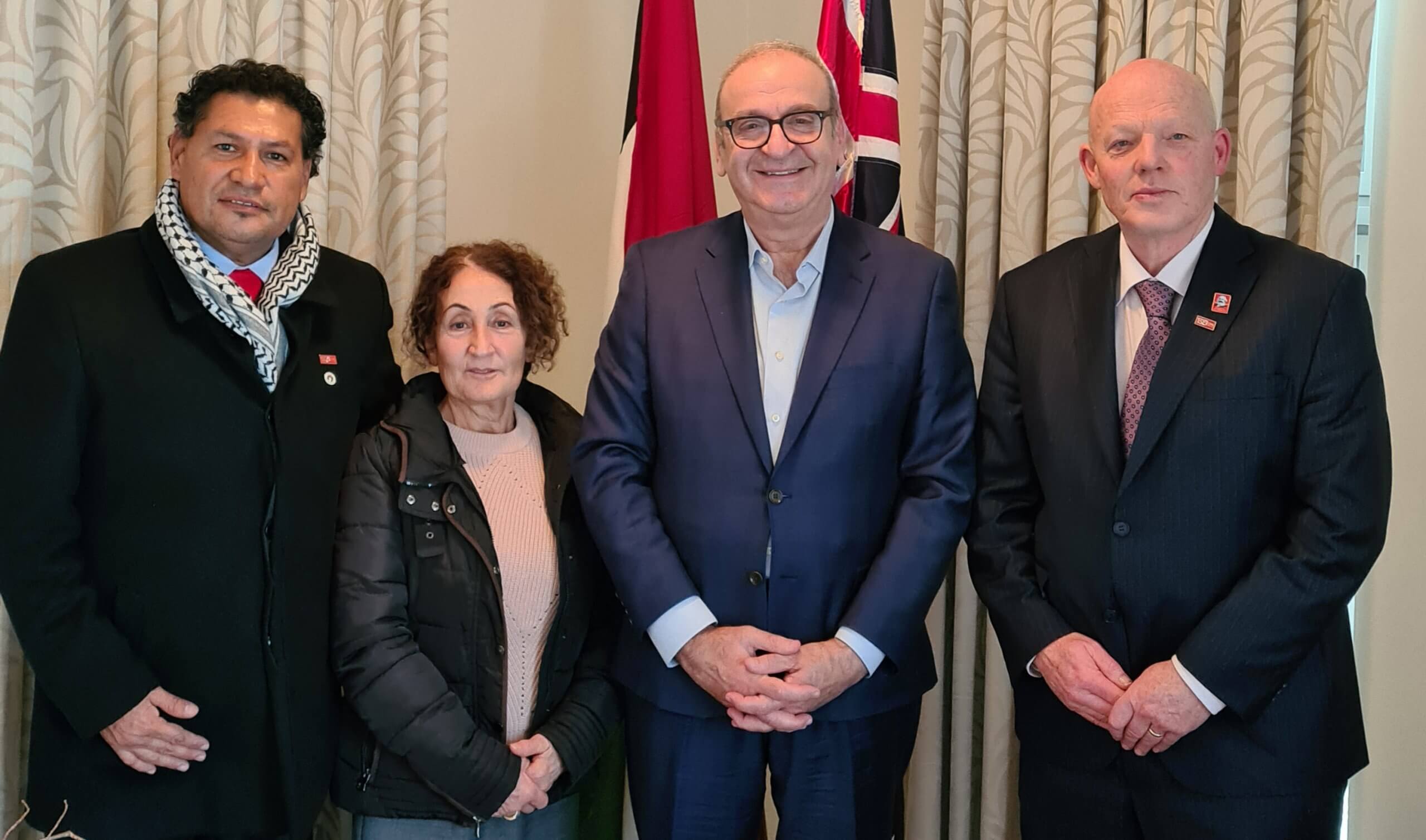 A CPA delegation made up of the general secretary comrade Andrew Irving, Party president Vinnie Molina and CC member Romina Beitseen held conversations with ambassador Izzat Abdulhadi (IA) of the State of Palestine on important matters on the Palestinian struggle for self-determination.

The CPA has a long-held policy on a two-state solution for Palestine based on 4th June 1967 borders with East Jerusalem as its capital; the UN resolutions in line with the Oslo Accords, including access to water, the release of all political prisoners, and the right to return and the end of Israeli settlements. This position is supported by the majority of the international community, who also campaign for the full recognition of Palestine as an independent state.

In recent weeks, people worldwide and in Australia have mobilised against the occupation and the criminal attacks on the Palestinian people by the Zionist state of Israel. Frustration in the community is growing, with many seeing the two-state solution as a failed effort. Recently a one-state solution proposal has been advanced by some sections of the Palestinian community and solidarity organisations inside and outside Palestine.

CPA: What are your views on the current situation in Palestine?

IA: Israel’s assaults on the Gaza strip last month killed at least 230 Palestinians, including sixty-five children, over half of whom were under ten years old. More than 1,500 homes were destroyed as well as schools, hospitals, and Gaza’s only COVID-19 testing facility. Israel’s eviction policies targeting families in Sheikh Jarrah and the provocative incursions of Muslim holy sites, including Al Aqsa, are some of Israel’s recent human rights violations against the Palestinian people.

Now, violent demolitions have begun in the predominantly Palestinian neighbourhood of Silwan, East Jerusalem. Moreover, the Israeli leadership has announced plans to build more illegal settlements in the West Bank, and Occupation Forces continue to assault and kill Palestinian civilians regularly. Additionally, the Israeli Knesset has endorsed a discriminatory law that prevents Palestinian family reunification. It is a very tense situation in the Occupied Palestinian Territories (OPT), but the Palestinian people continue their own resistance against human rights abuses by the Israeli Occupation Forces.

Unfortunately, the peace process and bilateral negotiations with Israel have been stagnant since 2015 due to Israel continuing its illegal colonial settlement program in the OPT. The settlement program is widely considered to be the main obstacle in advancing peace, as well as being explicitly illegal according to international law. Furthermore, many reports by prestigious human rights organisations (notably the recent Human Rights Watch report, “A Threshold Crossed”) have described the Israeli occupation as apartheid.

CPA: Do you view the two-state solution for the Palestinian people as a failed policy?

The vision of the establishment of an independent sovereign Palestinian state according to 1967 borders with East Jerusalem as its capital remains the same, but the approach must be changed. Bi-lateral negotiations will not help to solve the main problems. Accordingly, an international or regional conference should be organised to discuss and finally solve the conflict based on clear terms of reference, security council resolutions, and relevant UN resolutions.

Likewise, the international community should re-evaluate its engagement with the conflict, utilising international law tools such as the International Criminal Court, immediately recognise the state of Palestine, and implement a total boycott of illegal Israeli settlements and their products.

CPA: What are the key demands for the Palestinian people to end the occupation?

AI: We demand international protection, equality, justice, and human rights for the Palestinian people. From the international community, we demand that they recognise the State of Palestine with 1967 borders and East Jerusalem as its capital. Also, pressure should be placed on Israel to respect international law and UN resolutions, immediately stop its colonial settlement projects in the OPT, and end its occupation of Palestine. Israel must also be held accountable for its human rights violations against the Palestinian people: it should not be treated with impunity.

CPA: Is unity of the Palestinian people possible?

AI: Yes, it is possible. There already is a unity between all Palestinian people, regardless of geographical locations, against colonisation, occupation, persecution and discrimination. This unity was felt during the recent Israeli assault on the OPT among Palestinians in Gaza, the West Bank (including East Jerusalem), Palestinian communities in Israel, and the diaspora.

In addition, regarding fragmentation on the official level between the Palestine Liberation Organisation (PLO) and Hamas (and indirectly the West Bank and Gaza), there was and is still an ongoing process of meetings in Cairo and elsewhere to solve the ongoing problems between the two parties. The problems I refer to here are problems in vision and in strategy. These negotiations reached a very positive outcome when Hamas agreed to be involved in the democratic process by participating in the elections. In this regard, it is also worth mentioning that the PA is still responsible for all services provided to the people of Gaza (we do not have two administrations) and more than fifty-eight per cent of the PA’s budget goes to Gaza.

It was assumed that the elections would solve the issues between the two and increase unity between Gaza and the West Bank. Unfortunately, due to the latest Israeli assaults and their refusal to allow East Jerusalem to participate, the elections have been postponed. The talks between the two parties will resume soon in Cairo and will hopefully solve the pending issues.

CPA: What can organisations like the Communist Party of Australia and other solidarity organisations in Australia do to advance the freedom and self-determination of the Palestinian people?

AI: Firstly, I would like to recognise and appreciate the role of the Communist Party of Australia in advocating for the self-determination of the Palestinian people in statehood with East Jerusalem as its capital.

In response to this question, I would like to suggest the following strategy to advocate for Palestinian self-determination and recognition of the State of Palestine in Australia:

Network with other civil society organisations in Australia, in particular Labour Unions, social movements, NGOS, and faith-based organisations, as well as Muslim, Arab, and Palestinian communities.

Lobby Australian politicians from all parties and call on the Australian Government to recognise the State of Palestine without further delay, provide protection for the Palestinian people, and support the ICC’s independent investigation into possible Israeli war crimes in the OPT.

Additionally, call on the Australian Government to increase their financial support to the Palestinian people, particularly refugees, through UNRWA. Australia’s reduction of funds to UNRWA by half has had a very negative impact on the services provided to Palestinian refugees and, therefore, on their wellbeing.

The Communist Party of Australia and other solidarity organisations are encouraged to propose and implement effective media and social media strategies to amplify the voices of Palestinians in Australia.

Solidarity organisations, the Palestinian Embassy, the Muslim, Arab and Palestinian communities in Australia should all be united in solidarity with global social movements in support of the Palestinian cause, advocating for global democracy, peace, justice, equality, and decolonisation.