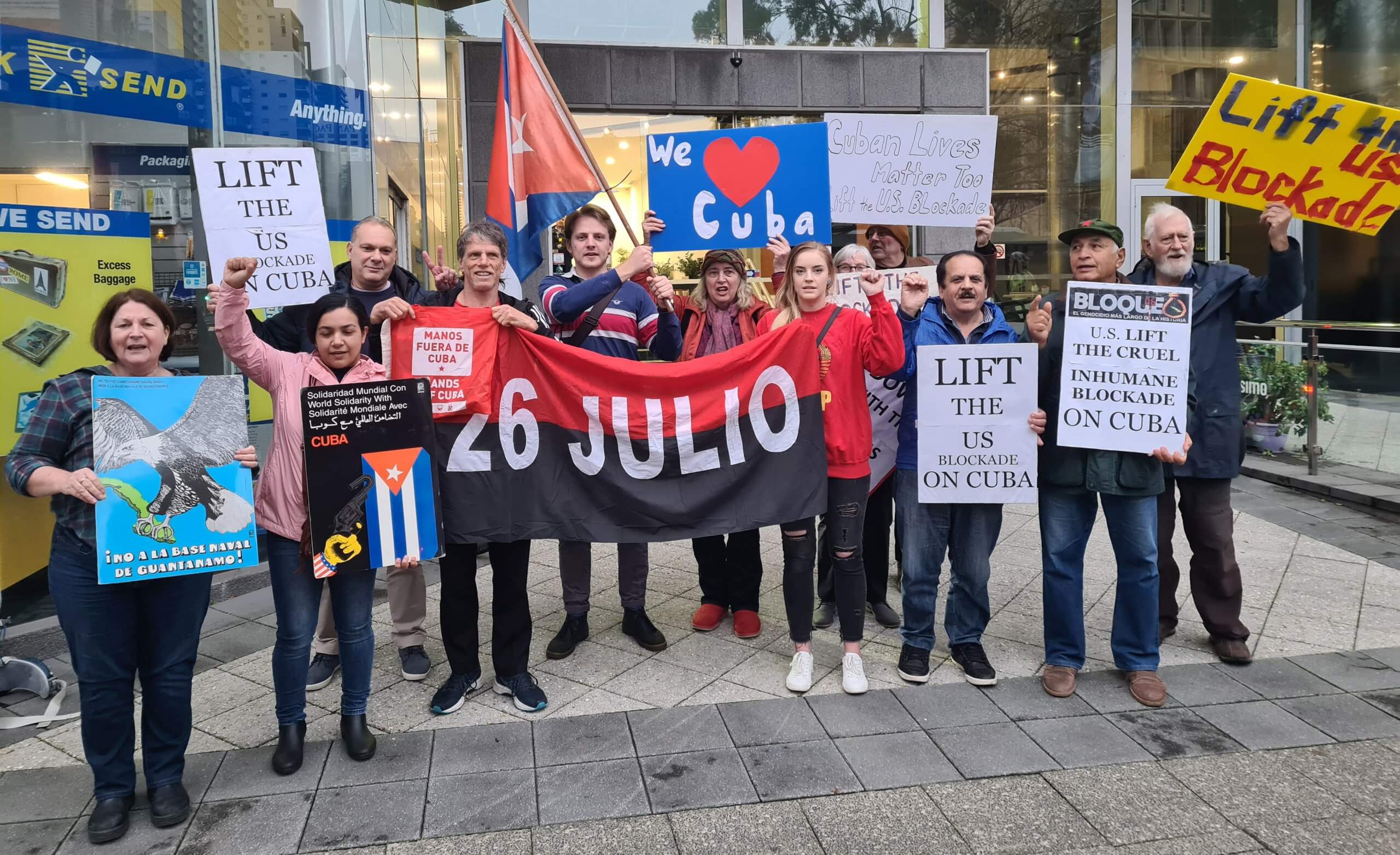 The Cuban people celebrate the 26th July spark of the Cuban Revolution. Also called National Day of Revelry commemorates the assault by Fidel Castro and his comrades of the Moncada Barracks in Santiago de Cuba on the 26th July 1953. Despite its failure and the assassination and incarceration of many of its participants the event marked a process that ended with the triumph of the Cuban revolution on the 1st January 1959.

Sunday the 11th July 2021 will be another date to commemorate in the Cuban calendar. Responding to the call of President Miguel Diaz-Canel, communists and the revolutionary people took to the streets in droves in San Antonio de los Baños and other parts of Cuba in defence of the socialist revolution, sovereignty, and their right to self-determination.

The revolutionaries confronted those led by dissidents inspired and funded by the US in a farcical campaign “SOS Cuba” or “SOS Matanzas.” The very sophisticated social media campaign originated outside Cuba, demanding a humanitarian corridor in Cuba.

Behind the action, genuine economic concerns arising from the criminal 60-year-old blockade on Cuba and health concerns worsened by the same blockade were used by the US “outreach” program to agitate and spearhead counter-revolutionary demands against the Cuban revolution and calls for regime change.

Some of the most aggressive protesters shouted denigrating names and threats against the communist leadership and communists in general. The strategic aim of this campaign was and is the destruction of the Cuban Revolution.

Despite his electoral promises, the US President has not reversed any of the 243 executive orders made by Trump. The most barbaric of these is the inclusion of Cuba on the unilateral US list of countries sponsors of terrorism back in January 2021.

Any hope of Biden going back to the few concessions of the Obama administration or improving relations with Cuba have not been realised. In fact, it looks like Biden is resolved to continue Trump’s aggressions.

The Biden Administration recently authorised more funds to facilitate the State Department to host roundtable meetings with several well-known dissidents to plan counter-revolutionary activities, an attack against the Cuban people.

The Communist Party of Australia issued a statement on the 12th July stating that “the CPA stands shoulder to shoulder with the Cuban Revolution and its revolutionary government.” It will defend the revolution as it is the responsibility of all revolutionaries and communists around the world.

Since the struggles for independence the Cuban people have chosen a path of self-determination, the triumph of the Cuban revolution in 1959 and its characterisation of a socialist path by Fidel Castro.

The fact is that the US criminal blockade that has cost the Cuban economy some US$150bil in losses has also prevented Cuba’s development and the wellbeing of its people. Despite that, the Cuban revolution has been an example of solidarity and human rights. All Cubans have the right to shelter, education, jobs, health care, and dignity. The COVID pandemic has aggravated the economy, which is mostly dependent on tourism. This is not just a Cuban experience. All countries around the world have been hit hard by the pandemic, in particular the developing world. In many places in Latin America, Asia and Africa, health systems have collapsed, and people have died or been left behind.

Cuba knew well that they couldn’t rely on other people’s vaccines because the inhumane blockade would have left Cubans behind. So Cuba’s biotechnology developed their own vaccines, which will also benefit other people worldwide.

We praise the revolutionary people of Cuba who have taken to the streets in defence of their sovereignty and right to self-determination. Unfortunately, they have paid an enormous price for their determination to be free on a socialist path.

The imperialist calls for a “humanitarian” intervention is a direct attack on the Cuban Revolution. Cuba needs the end of the criminal US blockade not humanitarian corridors.

The blockade means that Cuba cannot purchase any goods on international markets or have access to financial loans as the US controls the economic and financial systems. The Helms-Burton Act Title III also punishes third countries from trading with Cuba.

We have great optimism in the Cuban revolutionary spirit to persist even during these toughest of times no matter how unjust, but we say loudly there is no reason why an entire people should be asked to endure such an injustice.

During these times of COVID when the greatest cooperation is needed globally among people, Cuba has not faltered in that commitment despite the ramping up of the attacks against it by US Administrations. The Cuban Revolution continues to deliver not only for the Cuban people but more broadly by sharing their medical skills where needed.

A truly amazing wave of solidarity efforts were launched in support of Cuba all over the world. In Australia we are also strengthening the campaign to end the criminal blockade. Cuba is not alone and people are rallying in defence of Cuba outside US embassies and consulates demanding the end of the blockade and all subversive campaigns on the Cuban people.

The Australian government needs to assist Cuba in these difficult times of the pandemic and use its diplomatic channels to press the United States to respect the UN General Assembly’s vote, who for 29 consecutive times has voted against the blockade with only the US and Israel voting to keep it.

We demand the end of the subversive campaign against Cuba.

No to the imperialist call for a “humanitarian” intervention!

We demand the end of the US blockade!

The unity of the Cuban people shall overcome!

For information on how to get involved in Cuban solidarity or to donate contact international@cpa.org.au