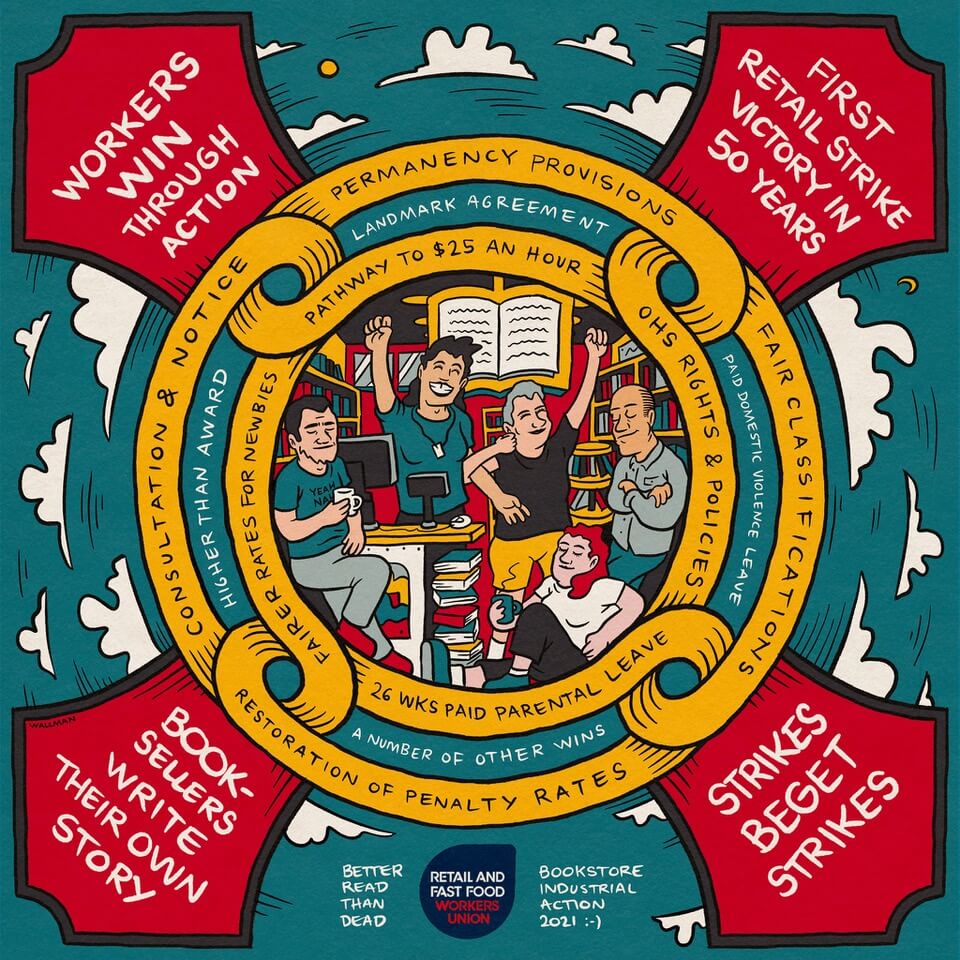 The Retail and Fast Food Workers Union (RAFFWU) announced that on Tuesday 27th July, Better Read Than Dead workers unanimously endorsed an in principle agreement with the store’s management.

This comes after management locked out workers on Monday 26th July in retaliation to the escalation of their industrial action.

Industrial action began on 21st July, with workers initiating bans on overtime, the handling of cash, and the updating of window displays.

An escalation with new bans, including a ban on work associated with web orders was set to begin on Monday 26th July before management pre-emptively locked out workers.

RAFFWU stated that from Wednesday 28th July all industrial action has been lifted, with the lockout ending and workers returning to work.

The union reported that the agreement contained “historic conditions in the retail sector [… that are] far superior to any major retail or fast food agreement in Australia”.

This includes: optional casual to part-time conversion for all members; minimum consultation times for major changes and redundancies with rights to redeployment and severance pay; reclassification of all workers to at least Retail Employee Level 3 following probationary periods; restoration of 100 per cent Sunday penalty rates; abolition of Junior Rates following probationary periods; an hourly base rate $1 more than the Award minimum; a pathway to a $25 per hour living wage in the future; health and safety clauses as well as policies and rights detailed in the agreement; twenty days’ paid domestic violence leave, twenty-six weeks paid parental leave; and a number of other important outcomes.

This has been a landmark struggle. Not only will it be both the first Enterprise Bargaining Agreement (EBA) in an Australian bookstore, but the first EBA negotiated independently by RAFFWU.

This comes as RAFFWU reported that Australian businesses are moving away from Enterprise Bargaining in a bid to avoid paying more than the minimum Award wage.

While Enterprise Bargaining was desirable when the Shop, Distributive and Allied Employees Association (SDA) routinely passed Agreements that paid below the Award rate, there is little incentive to bargain now that RAFFWU has restored many EBAs to the award rate, with future EBAs threatening to cost employers.

Most importantly, the struggle was won by a militant grass-roots campaign led by united workers that culminated in the first case of industrial action in the Australian retail sector in over fifty years.

Better Read Than Dead workers should be proud of their actions. They have demonstrated that the only way for workers to win is to unite and fight.

Study reveals shocking decline in life expectancy in the US