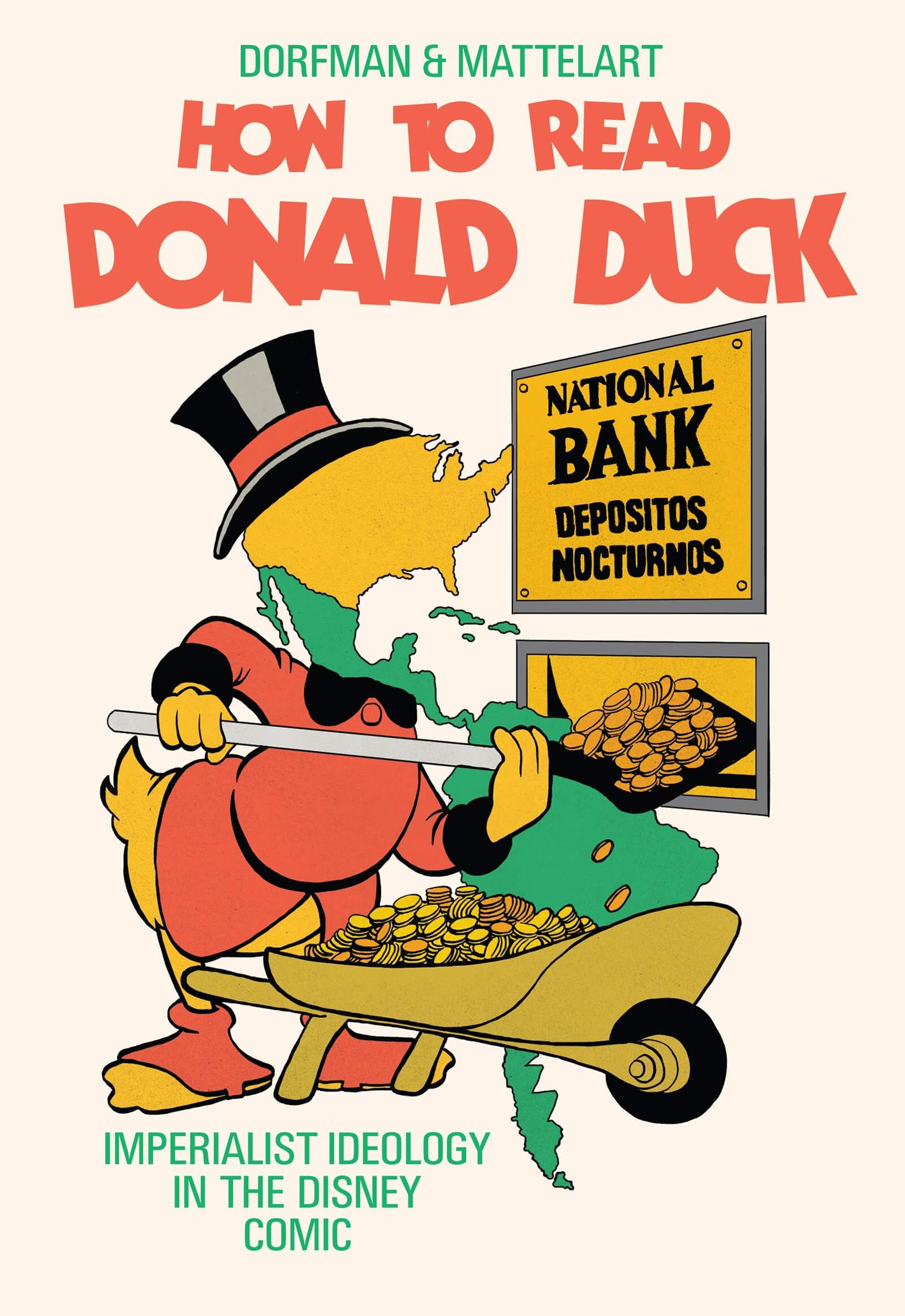 One of the first acts committed by the Chilean military, after the coup of 11 September 1973 was to confiscate and burn books. Para leer al Pato Donald (How to Read Donald Duck, HRDD) was one of them. Although banned for decades in Chile and the United States, copies had been sent overseas to be reproduced, translated, and republished. Photocopies of the book were being sold for over $100. It has survived as a great study of US cultural imperialism in Latin America. By the early 1970s, little Marxist analysis had been written on US cultural imperialism outside of Cuba. HRDD therefore became a leading light on how the US was trying to control the minds of young people into believing the “Great American Dream” and Latin America’s inferior position to US hegemony.

It is not that Chile did not have its own comics. Condorito, a cartoon about the adventures of a little condor, was a very popular and humorous comic. It was that such Chilean comics were unable to compete against the power of US corporations. Disney comics were aimed at all ages, including university students. Dorfman and Mattelart analysed over 100 comics and found that over forty per cent of the stories have the Duck family travel to overseas countries, especially Latin America.

To understand the background of US comics, it is important to understand that in the early 1950s, there was a major movement in the US to ban comics as a bad influence on the minds of American children. The Comics Code Authority (CCA) was formed in 1954 by the Comics Magazine Association of America as an alternative to forced government regulation. Comic publishers would set up their own codes, not allowing violence, sex, and Leftist radicalism in their books, before they could display the CCA stamp on the cover. Unashamedly, the Code did not forbid racial stereotypes. It was the time of the investigations conducted by Senator J. McCarthy, and the hearings conducted by the House Un-American Activities Committee (HUAC), which tried to stamp out communism in the US. As a result, dozens of publishing houses were forced out of business.

Those that survived the purges thrived, especially Disney, who had previously produced films on Latin America for the US government. Although Disney’s comics are less read today, in the 1960s, they were extremely popular. By 1962 Disney sold 50mil comics in fifty countries, translated into fifteen languages. In South America, the Chilean printed edition was also sold in Peru, Paraguay, and Argentina. These consisted of four comic titles, which sold an average of 800,000 copies per month. This constitutes 4,400 pages of Disney material, of which a third came directly from Disney studios, a third from Disney’s US franchise Western Publishing Co., and the remainder from other franchises. By the time of the Chilean coup, Disney comics were read by over a million Chilean readers every week. In 1973 Disney had fourteen different comic book titles being published in the US. Disney comics were well placed to influence how the US saw itself and how those countries “South of the Border” were portrayed and perceived under Disnification. “We Latin Americans,” write Dorfman and Mattelart, “are separated from each other by the vision we have acquired of each other via the comics and the other mass culture media.”

Mickey Mouse first appeared in Steamboat Willie in 1928 and in the first Disney comic in 1933. Donald Duck appeared in 1934, but Uncle Scrooge, invented by Carl Barks, did not appear until 1956. Disney’s Scrooge is inspired by Charles Dicken’s miserly Scrooge and the Scotland-born US-millionaire Andrew Carnegie, who owned US Steel. There is no equivalent for “Scrooge” in Spanish, and it is translated simply as Tio Rico (Rich Uncle), thereby losing any sense that he was a ruthless miser. Disney comics are filled with relations – uncles and nephews, aunts and nieces, cousins and a Grandmother – yet no one has parents. It is as if they came from a giant incubator. By having no parents, the idea of sex is never raised. Loyalty between families is always maintained, no matter what their foibles. The women of these families are always polite, dainty, and fear adventure. Daisy, Donald’s girlfriend, works as a secretary for Scrooge as the males who go off for adventures in foreign lands. Any feminist character is quickly overthrown and ridiculed. Powerful female characters are devious, such as Magica de Spell, who is a witch.

“Donald Duck” comic characters are divided into ducks (with bills) that are white and dogs (black button noses) that are black. Ducks live in Duckburg, which is based on a utopian Californian town with minimal obvious class stratification. It is democratic – they vote for the mayor – but they do not vote for a president or a governor. Most people work in tertiary industries, but there is no sign of industrial production. Wealth under Disney can be described by Marx’s “fetishism”: the process that separates the product from its origin and is abstracted from the actual circumstances of production. Rarely do these comics refer to the working class: factory workers or the poor. Paupers are pushed out of society to remain unseen in a slum at the edge of town.

When Donald’s nephews (Huey, Dewey, and Louie first appeared in 1938) discover the poverty of the slum, they do not renounce the social injustice, but they react in a typically American way; they collect donations for Christmas presents to give to them. Uncle Scrooge is so wealthy that he could easily have pulled them out of poverty, but he doesn’t. “The less fortunate regard their Subjection as natural,”the authors say. The system is left as it is, with no sense of social injustice. People are poor because of laziness or misfortune, and therefore it is the life dealt to them – just bad luck. The nephews go away happy in their actions, and the socioeconomic system remains intact, unquestioned. Conflict in Duckburg never has “a social base, but is conceived in terms of good versus evil.”

Donald never has money because he is lazy. Gladstone Gander does not need money because he is so lucky that he finds lost money every day. Scrooge is rich because he is a genius at financial bargains, not because of his ruthless dealings with people, especially in the third world. Disney comics argue that his activities are a win-win situation and that the “natives” are content in their simple ways, unknowingly giving away precious minerals and treasures for pennies and trinkets. Uncle Scrooge will hire Donald and his nephews for pennies an hour and will cheat them of even this paltry sum by the end of the story. Children do not understand money, and Donald is not intelligent enough to see he is being underpaid and defrauded of his income. This is much the same way that indigenous people are portrayed in Disney comic books.

Walt Disney hated unions and made them illegal at his studios and parklands. After Disney moved into a large new studio building, a strict hierarchy of employees was maintained. The workers organised a strike for improved conditions. He saw this act as ungrateful disloyalty and after that banned unions from his studio and parklands. If workers were seen outside of work hours in a group of more than four, they were sacked. This strident reaction to those he thought were radicals is witnessed in his comics. The demonstrations against the Vietnam War were portrayed as a rabble who are easily distracted by a lemonade stand. The ongoing war in Vietnam is imagined as senseless violence by Asians with pronounced buck teeth, who are easily influenced by Scrooge to end their revolution. Cubans are portrayed as ruthless pirates of the Caribbean.

US media of the period often used fake countries to represent Latin America. This goes back to the 1920s when US films commonly portrayed Latinos as “greasers” who could not be trusted and Latinas who lacked good sexual mores. Countries of Central America became so outraged at such portrayals that US films were banned. As part of the 1930s “Good Neighbor Policy,” US corporations placed their negative stereotypes in fake countries to overcome Latino sensibilities. It is something Disney comics maintained in the 1950s. The ducks’ adventures are set in “Inca-Blinca” and “Aztecland”.

Disney comics examine foreign lands, their geography, and people, based upon the crude stereotypes prevalent at the time. Mexico is “recognisable by its commonplace exotic identity labels, not the real Mexico with all its problems.” It is a picture-card, superficial world constructed for the American tourist to see but not touch. Disney casts the inhabitants as “decals and puppets for his fantasy palaces, good and inoffensive savages unto eternity.” The inhabitants are foolish, irrational, disorganised, and gullible. There is no representation of death squads, brutal genocide, or US invasions. Foreign lands remain peacefully undeveloped, in the periphery of empire, under a dependency based upon the American dollar and hegemony.

Latin America remained a land without a past. The past exists solely as a function of the present to support prevailing ideas. “Disney’s mutilation of the relationship between the past and present accounts for his schematisation and moralisation of Third World history”. By showing the real face of cultural imperialism at work through the supposed innocence of Disney comics the authors show the extreme cultural transformation undertaken by US comic books. As long as Disney comics take hold of the reader’s imagination, “the bourgeoisie and imperialism can sleep in peace” in Latin America. That the book not only reveals how Walt Disney thought about the place of US hegemony, but that it is accepted by white Americans is the real sorrow.