On the 12th of August 2021, the United Nations (UN) issued a postage stamp bearing a photo of Saint Mother Teresa for use at the UN Postal Administration (UNPA) at the UN headquarters in New York City. The stamp features an engraved-style portrait of Mother Teresa, with the quote: “Not all of us can do great things. But we can do small things with great love.” Mother Teresa’s image has graced many stamps worldwide, including a commemorative one issued by the United States Postal Service (USPS) to celebrate her canonisation. India and Albania later followed with their own commemorative stamps. According to the former UN Secretary-General Javier Pèrez de Cuéllar, “She is the United Nations. She is peace in the world.”

This is a puzzling comment to be made on such a controversial figure. What then is the political reason behind the issue? For the UN to issue a stamp celebrating the life and charity work of Mother Teresa is of great political importance to the Catholic Church. Obviously, the UNPA is using her popularity for high stamp sales, but there is something more important, in that the stamp portrays the saint and the church in a very positive political image. A far cry from what the British-American journalist Christopher Hitchens reveals as a “cult of death and suffering.”

What is the reality behind this “saintly” woman, whose carefully crafted image is known around the world for her Missions’ aid to the poor? Political philately argues that images on postage stamps are not just pictures that bear the name of the country and the value of the postage paid. They are political statements. All postage stamps are legal documents bearing political messages. To forge postage stamps is a legal offence, as it defrauds the government of its charges. All stamps bear an image, which may be the head of state, such as the Queen in the UK, or portray government policies, such as the environment, education, health, and the presentation of a country’s history manufactured for public consumption. A map indicates a country’s claims to territories. In Australia, stamps have been issued to stake its claims in Antarctica. Maps on stamps have led to wars, or at least border conflicts, such as the recent Bolivian stamp with a map showing Bolivia’s claim to the region lost to Chile during the Pacific War (1879-1883). Other stamps may show a country’s major cultural religious festivities, such as Christmas and Easter. In Australia, stamps are not issued to celebrate Jewish, Muslim, or Hindu religious holidays.

Mother Teresa, Agnes Gonxha Bojaxhiu, was born in Skopje, Macedonia. She moved to India when she was eighteen years old, to help the poor of Calcutta (Kolkata). Through the Roman Catholic Missionaries of Charity, she aided the orphaned, the poverty-stricken, and the ill. In 1962 she received the Ramon Magsaysay Peace Prize from the Philippines government. Her international fame began in 1969, when the British journalist Malcolm Muggeridge filmed a documentary on her called, Something Beautiful for God. Muggeridge converted to Catholicism after witnessing a miracle at the Mission.

With this fame flowed tributes and monies. Pope Paul VI gave Mother Teresa the inaugural Pope John XXIII Peace Prize in 1971, and in 1976 she received the Pacem in Terris award. Three years later she was awarded the Nobel Peace Prize, “for work undertaken in the struggle to overcome poverty and distress, which also constitutes a threat to peace.” In her Nobel lecture, Mother Teresa called abortion “the greatest destroyer of peace today. Because if a mother can kill her own child – what is left for me to kill you and you kill me – there is nothing between.” In 1973 Prince Philip presented her the Templeton Prize, worth £34,000, and in Boston, she accepted the Good Samaritan award. More countries and organisations joined the international parade granting her more and more awards, prizes and accolades, such as the Albert Schweitzer Prize. In 1982 Mother Teresa was appointed an honorary Companion of the Order of Australia.

These awards and prizes brought much largesse, little of which went to alleviating poverty, as Mother Teresa saw poverty as something beautiful to witness. Her global income donated by people like, Princess Diana of Wales, the Reagans, the Clintons, and Yasser Arafat, would easily have outfitted several first-class clinics in Bengal, but she refused to do so. She even refused to provide basic medical treatment to patients suffering incredible pain. On camera, she described how one patient lay dying in great pain from incurable cancer: “You are suffering like Christ on the cross. So Jesus must be kissing you.” Mother Teresa went to the best clinics in Europe for her heart problem.

The wealth of Mother Teresa and her Missionaries of Charity has never been officially released, but it is in the millions. The testimony of Susan Shields, who worked for seven years as a disciple of the Charity, says that the sisters were forced to plead poverty to ensure enterprises continued to supply goods, services, and money. “The flood of business was considered to be a sign of Mother Teresa’s congregation.” The money “rolled in and were deposited in the bank,” with little attempt to improve “the lives of the poor.” Shields discovered that $50 mil had been deposited in the Charity’s bank account in New York City.

The wholesome image of Mother Teresa created by the Catholic Church is an important political tool used to spread the power of the church. Of all the international accolades bestowed upon the little nun, the most prestigious honour was her sainthood, the greatest reward issued by the church. Canonisation is a major political statement, creating an image of what the church stands for. In 2016, Mother Teresa was canonised by Pope Francis at St Peter’s Square in Vatican City, making her one of the 898 saints created so far by this pope. As a comparison, the Vatican canonised only 679 saints between 1588 and 1988. Pope Francis has created more saints than any pope of the twentieth century. Pope John Paul II, who made 482 canonisations, was quickly canonised after his death. His canonisation was based more on his political achievement, turning Poland against its Communist Party, than any saintly behaviour. The church has been politically active against communism around the world since the Spanish Civil War (1936-1939).

The Missionaries of Charity has raised millions from donations. After her death, the money ended up in the Vatican Bank, and was not spent on alleviating poverty in India. Other allegations include poor medical treatments and religious evangelism.

Mother Teresa had numerous other allegations against her. In 1994 Hitchens and Tariq Ali wrote Hell’s Angel, which draws on the account by Aroup Chatterjee, who lists several faults he witnessed in the Missions in Kolkata, comparing the observed conditions to that in Nazi Germany’s Bergen-Belsen concentration camp. He “never saw any nuns in the slums.” The nuns in the institute simply washed used needles and then reused them on other patients. The mayor of Kalkota, Bikash Ranjan Bhattacharya said that sisters of Charity “had no significant impact on the poor of this city.” Hitchens argues in his 129-page essay, The Missionary Position: Mother Teresa in Theory and Practice, that Mother Teresa was nothing more than a fraud, and a religious ultra-reactionary fanatic and fundamentalist. He accused her of not being a friend to the poor, “She was a friend of poverty.” She did not work “to alleviate poverty,” but to increase “the number of Catholics.” Mother Teresa told the world she had a direct line to God’s mind, yet she had deep internal conflicts over her belief in God and the efficacy of prayer. “Where is my faith? Even deep down,” she wrote, “there is nothing but emptiness and darkness.”

Hitchens argues that the Vatican found her activity and outspokenness, “useful in two ways – a first as an advertisement for the good works of the Church to non-Catholics; and second as a potent of moral suasion.” This morality is inveighed against abortion and contraception.

We can judge a person by the company they keep, and for Mother Teresa, she befriended many powerful leaders and ruthless dictators and attacked those who strayed from the church’s fold. In 1981 she travelled to Haiti to spin a positive image to the hated  Jean-Claude “Baby Doc” Duvalier and was duly awarded the Légion d’honnier. Yet, she went to Nicaragua and admonished the Sandanista revolutionary party, the FMLN. Mother Teresa visited Cardinal Archbishop of Managua, Miguel Obando y Bravo, who received a stipend from the CIA (Central Intelligence Agency), an indication of where she and the church’s loyalties lay.

When a new Pope takes office and sits upon the throne of St Peter, he must declare an oath to maintain the wealth of the church. It is extremely hard to estimate the total accumulated wealth of the Catholic Church. The Hustler’s Digest estimates its net worth at US$15 bil, others that it is more likely US$10 billion. Either way, the church is ranked amongst the richest companies in the world.

The church’s icon for compassion had accumulated a large sum of money. The New York Times revealed that despite her Charity being one of the world’s richest organisations, she failed to reveal where the money was spent. The Italian journalist Gianluigi Nuzzi in his The Original Sin, claims Mother Teresa had “by far the most cashed-up account” in the bank. All of which is tax free.

All these accusations were well known to the United Nations before issuing a stamp that celebrated the saintly Mother Teresa. All stamps must go through a process to determine whether the image on a stamp is acceptable in the way it portrays the UN. Her image is useful, not just in raising money from stamp sales, but as a political statement of what the UN and the Catholic Church stand for. This stamp tars the UN with the nefarious activities of the Missionaries of Charity, its misuse of funds, and its shabby treatment of patients. What a shameful political image for the UN. 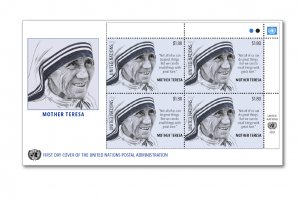