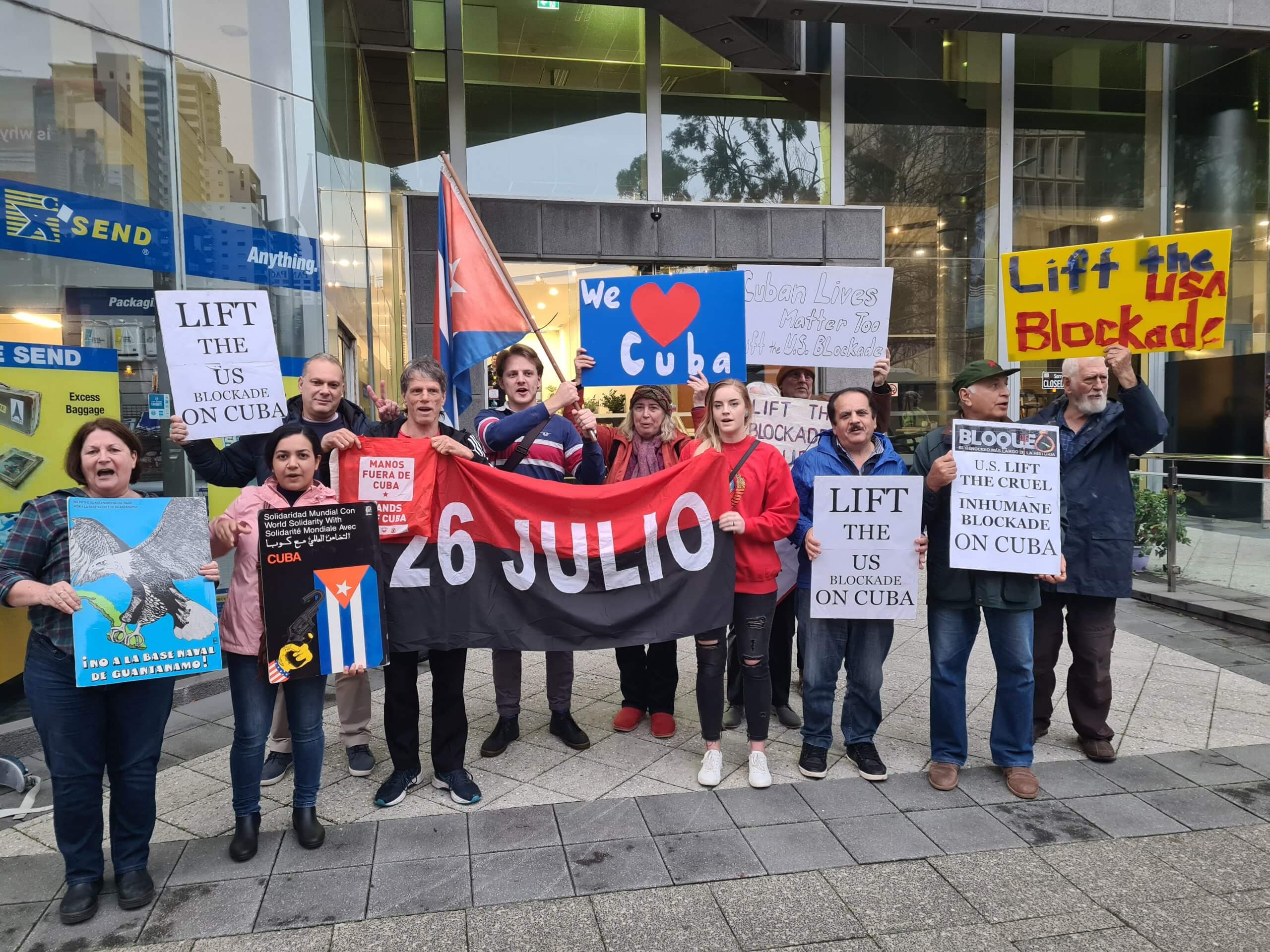 Australia-Cuba Friendship Society rally against the blockade outside the US consulate in Perth, Monday 19th July 2021.

The emails kept coming in … from farmers and students and chefs and academics whom I’d taken to that tiny island country over the past two decades to learn about her leadership in sustainable agriculture, cooperatives, and growing food in cities: What’s REALLY going on in Cuba?” they asked.

Yes, Cubans are feeling frustrated. Sixty years of an economic blockade by Washington, over 200 additional measures of economic strangulation by Trump, and now – for the past seventeen months – a tourism economy shut down by COVID (now raging, thanks to the Delta variant) have plunged Cuba back to the dark days of the Special Period, when the Soviet Union collapsed and so too did Cuba’s economy. Except this time, Cubans who left government jobs for the hard currency lure of the tourism sector are out of work. People are feeling desperate.

Thanks to policy measures led by Raul Castro in 2011 that opened the country to small enterprise and cooperatives, Cuba’s economy pre-Trump and pre-COVID was flourishing, despite the punishing impact of the US embargo.

Then came Trump. Then came COVID. Like a triple witching hour, investors long agitating to open socialist Cuba to capitalism began jingling in their pockets the coins of influence and paying very close attention.

Could Cuba’s current financial woes finally be the crack that lets the “capitalist light” come in? Could they get rid of this pesky and tenacious socialist government on their doorstep and open Cuba to investment? Well worth the cost of throwing some extra pesos to Cuban dissidents to go to the streets. Playing to international TV cameras with chants of “Down with the Dictator.”

Seriously? Anyone following Cuban politics knows why calling Cuban president Miguel Díaz-Canel Bermúdez a dictator is absurd. His address to the nation (carried by BBC but not CBC) spoke eloquently to the false narrative being fed by global media.

Yes, in this difficult economy there are line ups for food. Are Cubans starving? No. Despite economic hardships, Cuba continues to look after her people and – through their Henry Reeves medical brigades – those of other nations.

The CNN reporter interviews protesters, then turns his camera to another group of Cubans, standing quietly on a corner with Cuban flags raised in defence of their country. They tell a different story, putting the blame for today’s hard times squarely on Washington.

“Yo soy Fidel (I am Fidel),” one man exclaims, a phrase embraced by Cubans on Fidel’s death in 2016 to express solidarity and respect for the ideals of the Cuban Revolution by saying Fidel lives within them. Shaking his head, the reporter closes with the comment: “One man even kept insisting to me that he was Fidel. “I am Fidel” he kept saying. But (with a half-smirk) everyone knows Fidel died in 2016. This is so-and-so for CNN in Havana …”

The Cubans I am speaking to on a weekly basis – although frustrated by a long lockdown and even tighter sanctions – know very well who is responsible for their country’s economic crisis. From Washington, US president Joe Biden called Cuba a “failed state”. Ironic that.

Let’s be very clear: this battle has little to do with the Cuban people and all to do with how to run the economy. In the US, capitalism has a stranglehold on markets and communities. Rugged individualism is preached like a religion. We see how well that is working. In Cuba, state socialism charts a different course.

Choosing a socio-economic order is a sovereign matter between a nation and her people. Not investors from abroad.

It is time, Justin Trudeau, for Canada to show support for our friend Cuba, to stand shoulder to shoulder with this tiny Caribbean nation with whom we have shared strong diplomatic ties since 1946 and provide the important economic aid they so desperately need and so deeply deserve.

Wendy Holm is an award-winning Canadian agrologist, economist, farm journalist, and author living in British Columbia. She has been working in Cuba for twenty-three years.