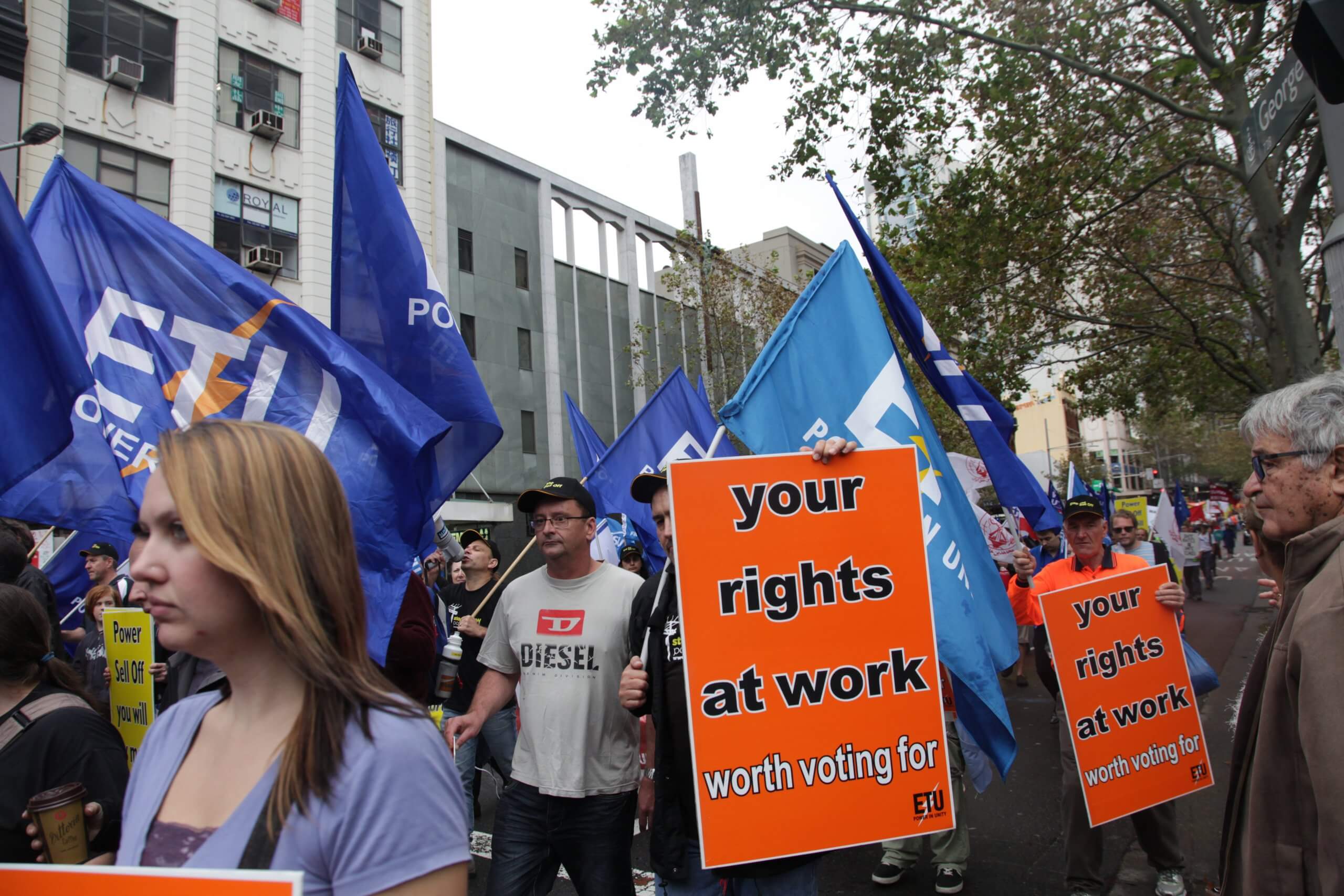 Over the past forty years, since the implementation of the Accord agreement between the Australian Council of Trade Unions (ACTU) and the Australian Labor Party (ALP), wages and salaries have not progressed – taking inflation into account – despite the great increases in productivity in Australia. The purchasing power of the average worker’s wages has not progressed since 1984 when Bob Hawke was Prime Minister. This, while the cost of living has greatly increased, especially for rent and housing. If this is not enough, the Coalition government has increased its war on workers through the IR Omnibus Bill, which allows an increase in the casualisation and reduction of working conditions in the workplace.

Today, job insecurity is a massive problem, which has worsened with the COVID shutdowns. People on casual or insecure contracts are forced to decide whether or not to work when sick, as they are not entitled to sick leave. This makes it difficult to plan from week to week, especially for families with an insecure income wishing to apply for a home loan.

It began in 1983 when Hawke wanted a social contract – an agreement between the ALP and unions – through a prices and incomes policy to be agreed upon by the ACTU and the ALP. From the beginning, the CPA and a number of left union leaders were critical of the Accord. They knew it would enforce income inequality, the casualisation of workers, force women to survive with poorly funded retirement, and the unions would be left with no real power to improve the rights and conditions of workers.

The Accord oversaw the implementation of neoliberalism: real wage reduction, suppression of industrial militancy, capital-focused industry policy, and in its later versions, the deregulation of industrial relations through enterprise bargaining. By 1987 the government had delayed tax cuts and pension increases, toughened welfare criteria, reintroduced university student fees, increased taxes, and privatised government-owned assets. The Accord led to twelve-hour shifts, loss of penalty rates, and limited annual leave for some workers.

In 2020, the federal government introduced the Fair Work Amendment (Supporting Australia’s Jobs and Economic Recovery) Bill, also known as the Omnibus Bill, into Parliament to reform five areas of industrial relations: award simplification; enterprise agreement making; casuals and fixed-term employees; compliance and enforcement; and Greenfields agreements for new enterprises. The bill had three major aims. The first to allow employers to list staff as casual, even if they were not, and staff could not prevent it. The second, and the most destructive, was to end of full-time work contracts. The third was to tilt bargaining for better wages and conditions in the employer’s favour. This bill would have led to increased job insecurity and reduced wages and working conditions.

On 9th December 2020, the IR Omnibus Bill was introduced into Parliament and passed the House of Representatives by thirty-five votes to thirty-three. It failed to pass the Senate.

On 18th March 2021, the Senate passed a “stripped down” version of the Fair Work Amendment (Supporting Australia’s Jobs and Economic Recovery) Bill, known as the ‘IR Omnibus Bill’. It commenced on 27th March 2021. The Act introduced amendments regarding casual employment and the obligations on employers of casual employees. These amendments are a major win for employers.

In theory, this enables the employee to accept or reject work as a casual even if their employment is not casual. In practice, as every worker knows, it is a matter of agreeing or being shown the door. The employee will work only as required; and the employee will be entitled to a casual loading or a specified rate of casual pay. A regular pattern of hours will no longer be able to be used to reassess staff as not casual. Employers will be allowed to offset any loadings already paid to casuals against future claims for other permanent employee entitlements such as sick leave or annual leave.

The employer has certain obligations to offer permanent work where a worker has been employed for the past twelve months and during at least the last six months of that period, the employee worked a regular pattern of hours on an ongoing basis. But employers do not have to make an offer of permanent employment if there are “reasonable grounds” not to do so and they must not reduce or vary an employee’s hours of work or terminate their employment in order to avoid this obligation.

These “reasonable grounds” are based on what is known or reasonably foreseeable, and include if the employee’s position will cease to exist in the following twelve-month period; the hours of work which the employee is required to work will be significantly reduced; there will be a significant change in the days or times that the employee’s hours of work are required and the employee cannot make themself available to work these days or times; and making an offer which does not comply with a recruitment or selection process required under state or Commonwealth Law.

ABC business reporter Gareth Hutchens interviewed Professor David Peetz of Griffith University, who says that many casual workers are actually working regular hours, which means they are “leave deprived.” Half of these leave-deprived employees receive the prescribed casual loading, but some are illegally underpaid, as witnessed by the audits and cases undertaken by the Fair Work Ombudsman.

Alison Pennington, a senior economist at the Australia Institute’s Centre for Future Work, says that the standard ways of understanding the economy’s performance via employment growth and GDP growth, “were not indicative of the scale of chronic insecurity.” Pennington says more and more people are being locked out of “traditional standard work” due to Omnibus regulations, which allow long-term employment to be considered casual. Casual work should be “temporal, seasonal, or genuinely on a casual basis.”

The Australia Talks National Survey 2021 was conducted between March 2 and 8, 2021, shortly before the JobKeeper program ended. The survey questioned job security and how secure they felt in their job. The result was: 88 per cent thought job security was of concern; and twenty-seven per cent thought they might lose their job within the next twelve months.

According to the ACTU, over two million workers, thirty-five per cent of working Australians are casually employed. Those between the ages of fifteen and twenty-four account for about forty per cent of total casual workers. They work at jobs that are temporary with few benefits, and no guarantee of employment permanency. A major problem with casualisation is how it impacts certain industries, such as hospitality, where underutilisation, uncertainty and instability mean there is little work-life balance in their employment. There are no indications that the conditions of casualisation will improve in the future. It is our aim to help Australian workers understand these issues and join their trade unions in struggle to defeat the arbitrary use of casuals.