US President Joe Biden, British Prime Minister Boris Johnson, and Australia’s PM Scott Morrison lined up like three stooges in a stage-managed virtual presentation to announce the formation of yet another military alliance – AUKUS. Morrison sold the deal as a win for Australia. He had a big smile on his face, but Biden’s smile was bigger, knowing that he had secured such a lucrative deal for the US military-industrial complex.

Morrison unceremoniously ditched the $90+ billion contract for twelve Attack-class conventional submarines from French military contractor Naval Group. In its place, Australia will purchase eight nuclear-powered submarines from either the UK or the US – all things considered, it will be the US.

The damage to Australia is far more serious than reputational. Apart from turning Australia into a military target, the economic fallout will be huge for the people of Australia.

Morrison signed a blank cheque for the submarines. The cost, details of the submarines, the builder, and the time of delivery are unspecified. All that we have been told is that it will cost the Australian people more than the French ones would have. The original contract for them was for $40 billion, which over time blew out to $90 billion. The French ones were to be delivered by 2030. The nuclear-powered submarines will cost billions of dollars (more than $100 billion) and will be ready around 2040 at the earliest.

“The Government’s intention is to build the nuclear-powered submarines in South Australia, maximising the use of Australian workers,” Morrison said. Jobs? Built in Australia? Already those promises are evaporating.

It only took a few days following the announcement for the proportion of components being built in Australia to shrink to a minority. As for jobs, the sector is capital intensive. The same amount spent on nurses, teachers, construction workers, and community services would create hundreds of thousands more jobs.

The bill will keep growing with billions more in cost overruns.

The Morrison government has agreed to the US having a base in Darwin, which will be paid for by Australian taxpayers. Who knows how much will be spent on upgrading the Collins class submarines that were to be taken out of service by 2030? There are suggestions that Australia should hire some nuclear-powered submarines in the meantime – another cost.

Defence Minister Peter Dutton refuses to give any figure for the additional costs of its latest shopping list. “It’s not going to be a cheap project, but maintaining peace is not something that comes for free,” he said. An understatement if ever there was one! It will be an “enormous cost” according to Dutton.

The military budget will increase from around two per cent of gross domestic product to between three and four per cent.

When other economies went into recession as a result of the global financial crisis, Australia avoided recession because of China’s growing economy and its purchase of Australian commodities and investments.

The Australian economy owes its first trade surplus in almost fifty years to China. China takes around eighty per cent of our iron ore exports – iron ore being our largest export. The price of iron ore recently sky-rocketed to over $200 a ton, although it has since fallen.

The Australian government has restricted Chinese investments in Australia, demonised the Communist Party of China and the Chinese government, attempted to intervene in the internal affairs of China, and challenged Chinese exports at the World Trade Organisation.

Tourism and education were two of Australia’s major exports until COVID hit. China was one of the biggest markets. Tehan has been at the forefront of removing Chinese “influence” from universities.

The Coalition government should not be surprised if the Chinese look elsewhere. Other Australian exporters are already feeling the pinch from China’s quotas and increased tariffs on exports of coal, barley, timber, lobster, and wine.

The Morrison government seems intent on pushing China to the point of no return with its brinkmanship. In doing so, it is playing with the lives and well-being of not only Australians, but the people of the whole region.

One of China’s strategic and economic successes is its diplomacy, conduct of economic relations on an equal and mutually beneficial basis, and integration with other economies, large and small, around the world. China has applied to join the Comprehensive and Progressive Agreement for Trans-Pacific Partnership (CPTPP) which has eleven members all bordering or in the Pacific, including Australia. To be accepted, unanimous agreement by CPTPP members is needed. The US pulled out under former President Trump.

The Morrison government has arrogantly said it would not agree unless the Chinese government resumed ministerial discussions between the two countries and removed “sanctions” it had applied to Australian exports.

In addition to holding China hostage to its demands, Morrison at the same time urged Biden to break an election promise and return to the CPTPP.

The Chinese newspaper, Global Times, issued a blunt warning to Australia: “There is no path to future prosperity for an Australia which chooses to isolate itself from the region’s largest economy.”

There could be other economic repercussions. France’s anger is palpable and the European Union is stunned by the behaviour of the US and Australia. It is not clear yet whether Australia’s negotiations with the EU for a free trade agreement are compromised.

Australia was already sliding into recession when the COVID pandemic hit. The $90 billion spent on JobKeeper, the billions on the JobSeeker supplement, and handouts to business provided the necessary stimulus to stave off a serious recession.

The federal government’s gross debt is over $800 billion and was projected to peak at $1 trillion. Debt itself is not bad, it depends on what it is used for and the ability to repay it. It was not so long ago that fear was being instilled in young people that they would be left to repay a huge debt. If the government had spent on job creation and not cut corporate taxes and income tax for the rich, debt would not be an issue. Full employment would bring in additional revenue through personal income tax and over time pay off the debt.

The Parliamentary Budget Office, in its latest medium-term outlook prior to the latest big-spend announcement, estimated that spending on defence would rise by almost seventy per cent in the coming ten years to more than $75 billion per annum. At present it is $44 billion. This additional debt will be run up on killing machines and create few, if any, jobs. That estimate is set to rise by billions with the forthcoming escalation of military purchases.

The neoliberal Coalition government will be determined to commence reducing that debt and budget deficits as quickly as possible. It will slash spending on social security recipients, age pensioners, and the most vulnerable. Services will be cut. Public servants sacked. Health and education will take a hit. The likelihood of war will become greater, bringing death and destruction.

And what for? For US imperialism’s war preparations. This madness must be stopped. Act now! 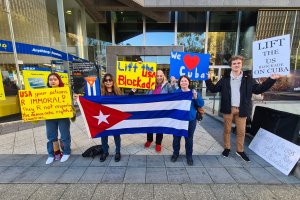