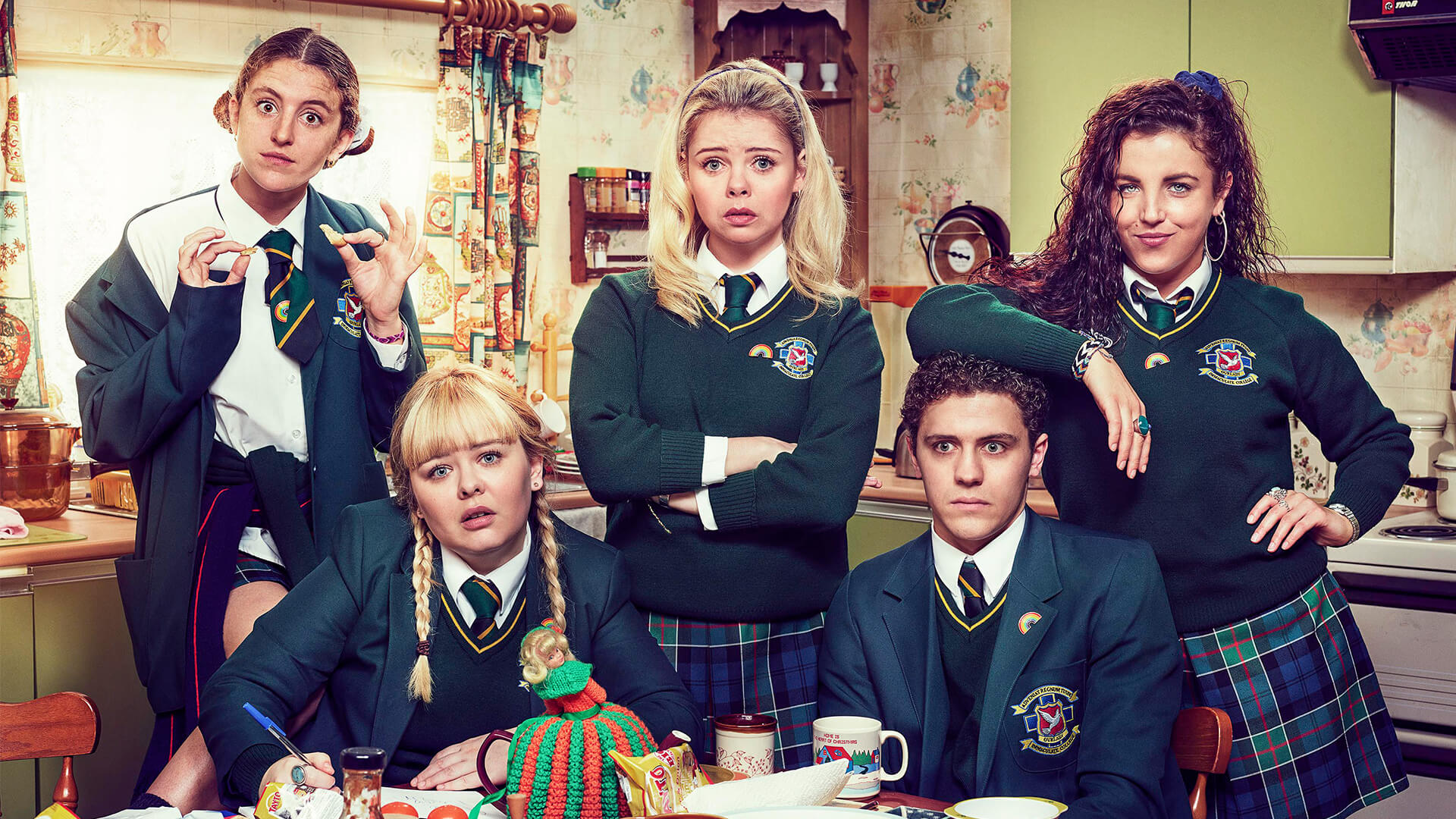 Hey everyone! Who wants to binge-watch a TV series about young people trying to lead normal lives and realise their full potential amid late-stage imperialism? What, no hands up?

That’s not surprising because I’ve just done my best to make Derry Girls (streaming on Netflix) seem as dull as possible while basically being accurate about what happens in it. I’ll try again: Who wants to see a funny TV series about a gang of foul-mouthed, insecure Irish high-school students with fun accents? I’d expect more hands up for that last question, but I wasn’t kidding the first time.

Derry Girls is genuinely amusing and exciting – well worth a look regardless of the viewer’s ideological bias or how much that viewer is interested in Irish politics. Derry Girls is set in the last years of “The Troubles” in Northern Ireland, just before the latest peace deal – “the Good Friday agreement” (aka the Belfast Agreement) – was signed in 1998. While not perfect, it is an engaging mix of the bog-standard sitcom, moving coming-of-age story, and a political slice of life.

The comedy is sometimes obvious, sometimes brilliant, but the way the humour and the political background interact is never handled the same way twice. This viewer grumbled at times but kept coming back for more.

The show revolves around a group of Derry schoolgirls at a Catholic girls school in the town of that name. Derry has a long history of being the subject of British mistreatment since 1689. When Ireland was partitioned in 1922, Derry was a Catholic majority town in a British statelet formed for the Irish protestant majority. Since then, there’s been a history of discrimination, gerrymandering and what the polite newspapers call “sectarian violence,” as though the two communities just randomly decided to not get on very well (I’m sure any Palestinian readers can relate to this). The infamous Bloody Sunday, when British troops shot twenty-six protesters, happened in Derry, and all of the hunger strikers who died in 1981 came from there. To put it mildly, there’s history there.

The main character, one of the “Derry girls,” Erin, is romantically ambitious and socially insecure. She lives with her parents and a grandfather who is constantly, unjustly, and amusingly furious with his son-in-law, her dad. The other Derry Girls are the rather flaky Orla who, like her equally flaky mother, is always vaguely weird; the perennially insecure Clare, who always worries about consequences; her polar opposite Michelle, who is always trying to keep up with the latest vulgar American vernacular and is obsessed with boys. Lastly, the other Derry Girl is, in fact, a boy, James – a nervous English boy whose mother left Derry years ago to get an abortion. The abortion didn’t work out, as one of the girls explains, pointing scornfully at James, and now he’s back in Derry at the girls’ school because everyone hates the English too much for him to be safe in the boy’s school.

The girls do regular “girls-in-sitcoms” stuff: gossiping about boys, trying to get around the rules their parents and teachers set but with the reality of an occupied Ireland going on around them. For example, in the first episode, they’re chatting while British soldiers go through their bus looking for weapons or bombs under the seats – I was as startled as James is at how casually the people of Derry react to troop presence. In the same episode, the entire cast treats a bomb on a bridge as just an annoyance: someone will have to miss a yoga class, and Erin won’t be able to get to the gig of a band whose lead singer she fancies. Life goes on sort of thing. At other times, the reality of what’s going on gets a direct comment. When James complains about how much history they have to learn, one of the girls tells him if the English hadn’t invaded them so many times, there wouldn’t be so many rebellions and uprisings for them to be tested on.

It’s a show that keeps the audience off-balance, which is what I keep coming back for. I can easily comment on the more predictable sitcom stuff, but there are some more successful bits in it that are great. For example, Erin’s always-angry grandfather insists on navigating on a family picnic rather than let his despised son-in-law get the credit for getting them safely past a Protestant extremist Loyal Orange Parade. The next scene shows the family car surrounded by Orangemen while the grandfather calls them “tangerine turds” from the passenger seat.

There are also genius touches like Kevin McAleer’s character – Uncle Colm – who appears from time to time as a relative who can make absolutely anything tedious. This tedious tendency is demonstrated when he tells a tale – which ought to be gripping – of his being held up by Loyalist gunmen in a way that makes everyone almost die of boredom. I don’t know if it’s quality script-writing or just that Kevin McAleer is so expensive they can’t use him all the time, but either way, he’s not over-used, and he’s great value when he appears.

The sitcom is leavened by social observations on racism towards non-whites and of course religious tolerance. Once in a while, the political situation impinges on the Derry girls so much that they forget to be funny – high death tolls and peace agreements which will change everything aren’t amusing, and there are moments when even the grandfather forgets to be irate, with the Derry Girls noticing the very awful situation they’re living through.

If you want to learn up on Irish politics, there are more direct routes than watching this enjoyable show.  If you like some politics to spice up your comedy and don’t mind thinking while you laugh, Derry Girls could be for you. 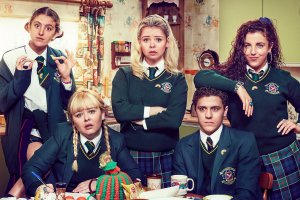