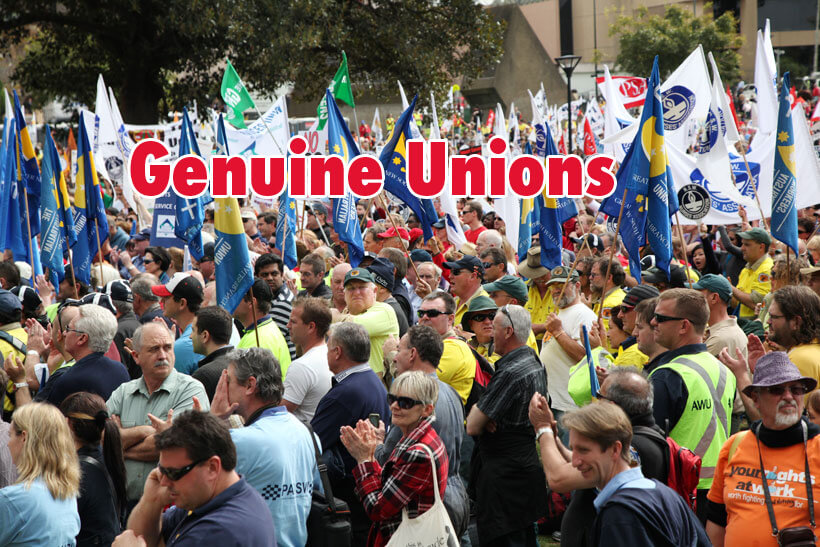 They claim they are a cheaper and “independent alternative” to registered trade unions. These associations openly set out to compete with and undermine genuine trade unions in health, education, policing, and other fields. While their membership is relatively small, they nonetheless pose a serious threat to the unity of the working class and trade union struggle.

They are fuelling and exploiting the fear of vaccination and oppose government-mandated vaccination in sectors such as health, aged care, and policing in their attempt to draw workers away from their unions. They claim to be recruiting hundreds of members a day and to have a combined total of close to 9,000 members covering seven associations.

“These are fake unions run by LNP [Liberal National Party] members and their associates set up to try and divide working people,” Australian Council of Trade Unions Secretary Sally McManus told the Sydney Morning Herald. “This amounts to an LNP-sponsored anti-vaccination campaign which will directly and needlessly cause working people to contract a deadly virus.”

Operating under the umbrella of Red Union Support Hub, they are backed by a group of lawyers and present and former members of the Liberal National Party in Queensland and the Liberal Party in NSW.

While most of them were set up within the past few months or are still in the process of being formed, the Nurses Professional Association of Queensland (NPAQ) has been around since 2014.

The deceptively named Red Union Support Hub claims to offer “support without the politics” and state that “[o]ur associations fight to protect you, not promote a political party.”

Each association makes almost identical claims about its “bottom-up” structure and appears to operate out of the same office. The names of officials are not publicly provided on their websites.

They claim to be non-party political and carry membership fees of fifty to seventy per cent less than their genuine counterparts. Their websites promote the claim that they do not donate financially or in-kind to political parties, instead claiming their fees are only spent on supporting members. In doing so, they are implicitly criticising trade unions that give support to the Labor Party and the Australian Greens. They might not give donations, but do they receive support from political parties or individuals?

The Red Union group, exploiting opposition to mandatory vaccinations as a recruitment tool, has now branched out to create a number of associations:

Queensland Council of Unions General Secretary Michael Clifford described the associations as “fake unions.” “Their agenda is to bust unions and limit their power to fight for members’ pay and conditions,” Clifford said.

“They seek to undermine collectivism, and what they do is the very opposite of unionism. Real unions focus on organising and fighting for members and improving their communities where they live and work.”

In the name of “choice” and ending “monopolies”, they were set up in competition with existing unions or bodies representing workers and in the case of doctors, the Australian Medical Association. The term “choice” harks back to former Coalition Prime Minister John Howard who legislated for the choice not to join a trade union.

Their main targets are genuine trade unions and the Labor Party. They play on the disaffection that many workers have with the major political parties by claiming not to have a party-political agenda, at the same time failing to disclose their real agenda.

The director of the Red Union is Jack McGuire. McGuire refuses to indicate the position of the Red Union associations on vaccination against COVID-19 – even when questioned about a video describing the vaccine as an “experimental biological agent” that the NPAQ shared online.

McGuire is also Secretary of the TPAA which was set up in direct competition to teacher unions. He was a member of the LNP. Murdoch’s Sky News has been all too willing to give him airtime attacking the Queensland Labor government and the Queensland Teachers’ Union.

The NAPQ Secretary, Aenghas Hopkinson-Pearson, was state electorate council treasurer for the LNP to Dr Christian Rowan in the seat of Moggill in Queensland.

Liberal Party member John Larter was working as a paramedic in NSW until recently being suspended after railing against public health vaccination orders for workers in critical front-line jobs, including paramedics. Larter is believed to be setting up an alternative association for paramedics. He argues that existing trade unions have abandoned their members by not fighting against public health vaccination orders.

Larter, along with some other health workers, is challenging mandatory vaccinations in the NSW Supreme Court. There are similar challenges in Queensland by the nurses’ and doctors’ associations, with online fundraising.

The NPAA was set up by Graeme Haycroft to challenge the Australian Nursing and Midwifery Federation. Haycroft’s past could hardly be described as one of supporting the best interests of workers. He was a member of the Joh-for-PM, an ill-fated campaign by former ultra-right, anti-union, Queensland Premier Joh Bjelke Petersen to become Prime Minister.

As a former National Party member his Troubleshooters Available franchise, a body hire company, supplied scab labour when shearers were taking industrial action in the 1990s. His company was also involved in union-bashing in collaboration with the National Farmers’ Federation at a meatworks in Victoria.

He was chairman of the LNP’s Industrial Relations and Employment Policy Committee.

Haycroft has come out strongly against workers being paid penalty rates and in support of the former Howard government’s WorkChoices legislation with its individual employment contracts. His previous attempt at forming a private teachers’ association failed.

NOT A TRADE UNION

When the NPAQ in an attempt to represent a nurse who had been reprimanded, took a case to the Queensland Industrial Relations Commission earlier this year, the Commission found that it was not a trade union under state law.

The Commission found that the “NPAQ’s legal personality and corporate status are inconsistent with that of a typical ‘trade union’ and its history is not in any sense typical of a ‘trade union’.” As a result, it stated, the nurse and NPAQ advocate “did not have the claimed workplace rights or protections” and so could not argue that they had been breached.

The NPAQ is making some internal changes in an attempt to gain trade union status and has indicated it will appeal.

“With no class wars to fight, no party political agendas to fulfil, no ideological barrows to push, the focus is solely on member needs and every membership dollar supports you.” So runs the claim on the websites of the different associations under the Red Union umbrella.

Such a claim immediately negates their role as an industrial union. Under capitalism, the class struggle cannot be waived away by a magic wand. Employers, pursuing maximum profits, will always wage the class struggle against workers. They will always seek to drive down wages and working conditions to maximise profits.

The Guardian has carried reports on their strike actions for wages and safe working conditions in recent issues. These strikes are class struggle; they are literally life and death struggles for drivers. They are ideological. The struggle for a tribunal to regulate the industry is political. Support for a party which commits to regulation of the industry is party-political and in the interests of workers in the industry.

No “industrial union”, as the Red Union associations claim to be, can support its members while claiming that it is not ideological or rejecting class struggle.

To take another example, the Queensland Nurses and Midwives Union, states that it “actively seeks to promote the professional, industrial, democratic, political and social interests of members …” Such pursuits are a legitimate and important role for a trade union.

The activity of Red Union nurses’ and doctors’ associations seems to be centred around online fundraising for legal challenges to mandatory vaccination of health workers. There are no campaigns on the associations’ websites.

In addition, it is contrary to the health and wellbeing of workers, their families and the wider community. Maximisation of vaccination is in everyone’s best interests – health-wise, socially and economically.

The Communist Party of Australia (CPA) supports and encourages all those who are not prevented for medical reasons to be vaccinated. The more people who are vaccinated, the safer our community will be. “Freedom” will not come by spreading conspiracy theories about vaccines or launching court challenges to the decisions of health authorities which are based on sound medical grounds. These court actions are more than likely to fail while wasting the valuable time of health authorities.

The CPA rejects employer driven compulsory vaccination for the sake of profit.

The dangers that these fake unions pose should not be under-estimated. Yellow unions have always work in the interest of employers and divide working people.