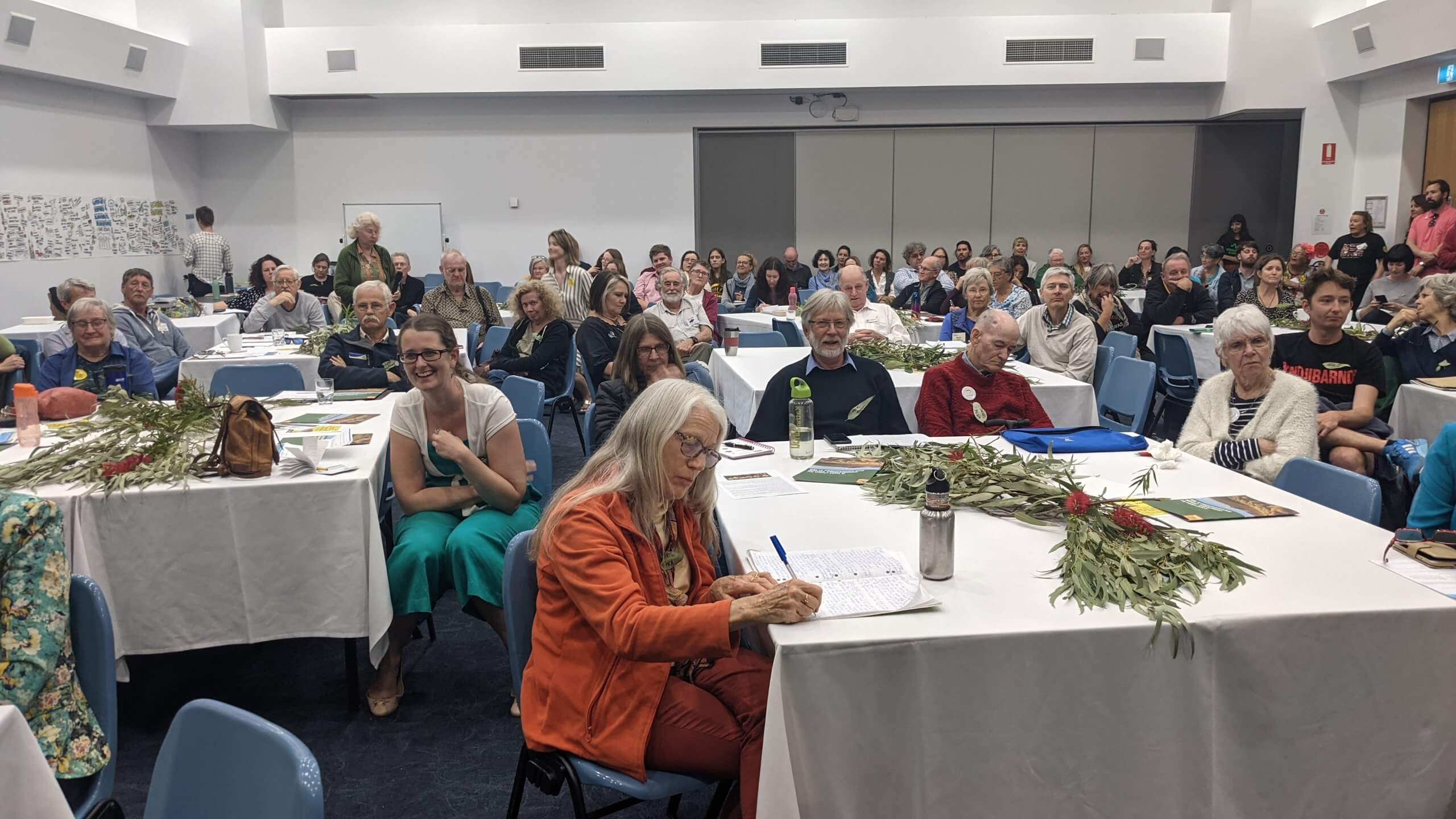 While logging has been banned, we saw the destruction of ancient Aboriginal artefacts at the Juukan Gorge at the hands of a rapacious mining corporation that was assisted by weak Aboriginal heritage legislation. While our state government is talking up climate change legislation, it still allows carbon corporations to spruik new projects such as the Scarborough Pluto extension and large areas of onshore gas fields in the Kimberley.

Piers Verstegen, current CCWA Executive Director, the conference’s first speaker, stated that notwithstanding the still embedded nature of carbon in much of our politics, the increasing awareness of the impacts of climate change through bush fires, floods, and cyclones, is pushing biodiversity up the agenda.

Verstegen reflected on the long lag of many countries committing to net-zero emissions by 2050 to 2060, suggesting that while they might be a step in the right direction, they could also be a cynical attempt to squeeze the last profits out of carbon from a dying climate.

We needed solutions the whole community could benefit from, including halving carbon pollution by 2030, 700 per cent renewable energy by 2040, zero loss of habitat for endangered wildlife and 10 million hectares of revegetation and carbon farming by 2025. While Infrastructure WA has responded to climate change through a Climate Action Fund of $750 million to fund action on carbon farming, increasing renewable energy, and increasing the use of electric vehicles and the infrastructure to support these changes, the carbon economy was still continuing in WA.

The second speaker was Professor Carmen Lawrence, CCWA President and former Premier of WA, who opened by saying there was a need to be simultaneously hopeful and realistic. While there is no shortage of scientific reports to point out the dire environmental situation we find ourselves in, there does not appear to be an urgent desire to change.

Lawrence pointed out that on 7th December 2006, Mark McGowan, the then Environment Minister under the Premier Alan Carpenter, released a report calling for a 100-year strategy to arrest the inexorable decline in biodiversity. Stopping the decline in biodiversity would increase our ability to deal with the effects of climate change. The following week, however, on the 13th of December 2006, McGowan gave the go ahead for the $15 Billion Gorgon Project; a joint venture of Chevron, Exxon/Mobil and Shell, despite the Environmental Protection Authority’s recommendation the project should be abandoned as it posed a significant risk to Barrow Island’s unique biodiversity.

The effects of a warming climate, said Lawrence, would lead to decreasing rainfall, which would lead to excessive harvesting of groundwater and fragmentation of native vegetation as the less robust sectors of the ecosystem collapsed.

Lawrence suggested the primary precipitator of biodiversity loss is the lack of public awareness that it is actually happening. While there were solutions, they required a substantial mind-shift. Lawrence also postulated about what should a modern government look like, and one characteristic it should have is that biodiversity has the same value as the economy. A further loss of biodiversity should be seen as a failure of our global responsibility to protect biodiversity. To achieve this, said Lawrence, we need improved integration of biodiversity with other land uses. She suggested that though this was beginning to occur on a small scale in the present, we needed to significantly increase the scale of these efforts to achieve the outcomes required to manage the climate crisis. To achieve this, added Lawrence, “We need scientifically informed action on climate change and biodiversity.”

The next speaker was someone who was putting action into rhetoric as the Mayor of Victoria Park, Karen Vernon, a local government area adjacent to the City of Perth. As the Mayor of Victoria Park, Vernon was one of the first local government authorities to sign the declaration of a climate emergency. Following this declaration, Vernon created a dedicated climate adaptation and action plan. Initially, there was a low level of engagement by the community, with only sixty-five people participating in the survey and fifteen people participating in a climate change workshop. Since then, community engagement has increased with action on a popular bush regeneration project involving the former Kent Street sandpit, a ban on single-use plastics and polystyrene, solar panels on council facilities including the administration building, an Urban Forest Strategy to increase tree canopy levels and the roll-out of a food and garden organics bin (FOGO). The council also proposes to enter into an emissions offset reduction plan which will cost $8.4 million and result in a 1-2 per cent per annum increase in the rates of residents.

The next speakers were Claire McKinnon, WA Campaign Co-ordinator of the Lock the Gate Alliance and Martin Pritchard of Lock the Gate Kimberley. McKinnon said that while the McGowan government initially supported a moratorium on fracking, the moratorium was lifted in September 2019. However, a ban on fracking remains as the regulations on fracking and a code of conduct are not yet implemented. Consent requirements for traditional land owners and private land owners have not yet been agreed upon.

The Intergovernmental Panel on Climate Change has also said that fracking should not take place as it will increase greenhouse gas emissions and therefore contribute to global warming. In the Kimberley, Pritchard organises the battle against those fracking interests who have staked out large claims over the Canning Basin, which occupies a significant portion of the Kimberley.

Pritchard said there was calculated to be 438.5 TCF’s (Carbon Tetrafluoride) worth of methane in the Canning Basin, which if extracted, would double Australia’s carbon budget allowable under the Paris Climate Agreement. While there is a ban on fracking, there is not a ban on exploring the various leases in the Kimberley. Lock the Gate have been active amongst Aboriginal people in the Kimberley who do not wish for their country to be compromised and destroyed by the hydraulic fracking for methane gas. Pritchard reminded the conference that it was with help from people in Perth that the campaign to stop a gas development hub at James Price Point near Broome in the Kimberley was successful and called for the continued support of people from Perth and beyond to save the iconic Kimberley country for its traditional owners and for all people of Australia.

Other speakers included representatives from community groups involved in bush regeneration and restoration.

There was also a panel discussion on soil carbon sequestration or carbon farming – a process of planting vegetation on previously degraded farmland to deliver benefits from improved soil management to taking carbon from the atmosphere through increased ground cover vegetation. There was also a youth panel on the environment and climate change with the two of the panellists being organisers for School Strike for Climate Change, who had their Perth Rally on the 15th of October 2021, outside the WA Parliament House. They echoed the urgency of the most well-known youth climate activist Greta Thunberg who, at the Berlin Rally for the Future on 24th September 2012, said of many governments that they are proposing, “vague and distant climate targets to make it look like they were doing something.” Thunberg in a rebuke to capitalism said, “[w]e cannot pretend to solve the crisis within the current system as we cannot build, buy or invest our way out of this climate crisis.” The results to date are not encouraging as Thunberg said, according to scientists’ calculations, emissions are set to rise by sixteen per cent by 2030 based on 2010 levels.

The Communist Party of Australia supports the many initiatives to address the climate crisis addressed at this conference to improve the state of the environment and promote and encourage community activism as part of the solution. However, many of the proposals have a market-based component and these may be subject to unexpected and costly failures. Capitalism itself is in crisis and if we want to save the planet, its environment and biodiversity we need to go beyond the profit motive and greed upon which the current capitalist system is based.

AUKUS exposed: nuclear is back