On the steps of the West Australian Parliament House on Thursday 28th October, I attended a protest with about 100 other people, mostly Indigenous, calling for justice for JC, the Yamatji woman, shot by a police officer who had subsequently been cleared of her murder. The police had been called because the family were unable to handle JC, who was suffering from poor mental health and was seen to be armed with a kitchen knife and a pair of scissors. A First Class Constable was among eight officers at the scene in Geraldton in 2019, and after leaving his vehicle, he shot JC sixteen seconds later: why wasn’t his laser used first?

The police presence was insensitively heavy at the protest rally, with more than fifty officers facing protesters as the rally began. This was immediately threatening and unnecessary, as the rally had begun with a tone of despair and grief that a black person had been killed by police action once again. The speakers were mainly from the immediate family of JC, joined later by Ngalla Maya CEO, Mervyn Eades, George Georgatos, and Megan Krakouer of The National Suicide Prevention and Trauma Recovery Project.

However, during the speeches to a fairly peaceful crowd, a small confrontation took place alongside the speakers when protestors were prevented from placing red hand prints on the front steps of Parliament. Realising this was unrespectful to JC’s family, Ernie Dingo eventually calmed the situation, and the speakers resumed.

Bernadette Clark, JC’s sister deplored the racist attitude of the WA Police, claiming that the death of her sister needed proper justice, adding that the policeman who had killed her had walked free. She vowed to take her protest to Canberra.

Mervyn Eades pointed out that JC’s death was just one of many, adding that she was a mother, a daughter and a sister, and her death left an enormous gap in what was a strongly bonded family. He added that this was yet another example of Indigenous Western Australians being dismissed and not acknowledged. One indigenous death impacts the entire indigenous population.

Georgatos added that the incarceration of First Nations people in WA was not only the highest in the country, but was also the highest in the world, pointing out that nothing had changed since the 1980s. He said “Western Australia continues in terms of rates, in terms of toll, the highest in the nation in terms of deaths in custody.” Megan Krakouer said that investment was needed for Indigenous people. “What we are asking for is mass investments to help the most marginalised,” adding that WA had “posted a $5 billion surplus. So why are our people dying.”

Clark had the last word saying “We will never be happy until this man who pulled the trigger is held accountable,” adding that he needed to be held responsible for JC’s death.

I felt that the presence of the few non-Indigenous people there was seen as welcome support. 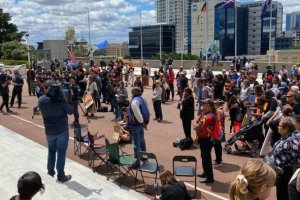