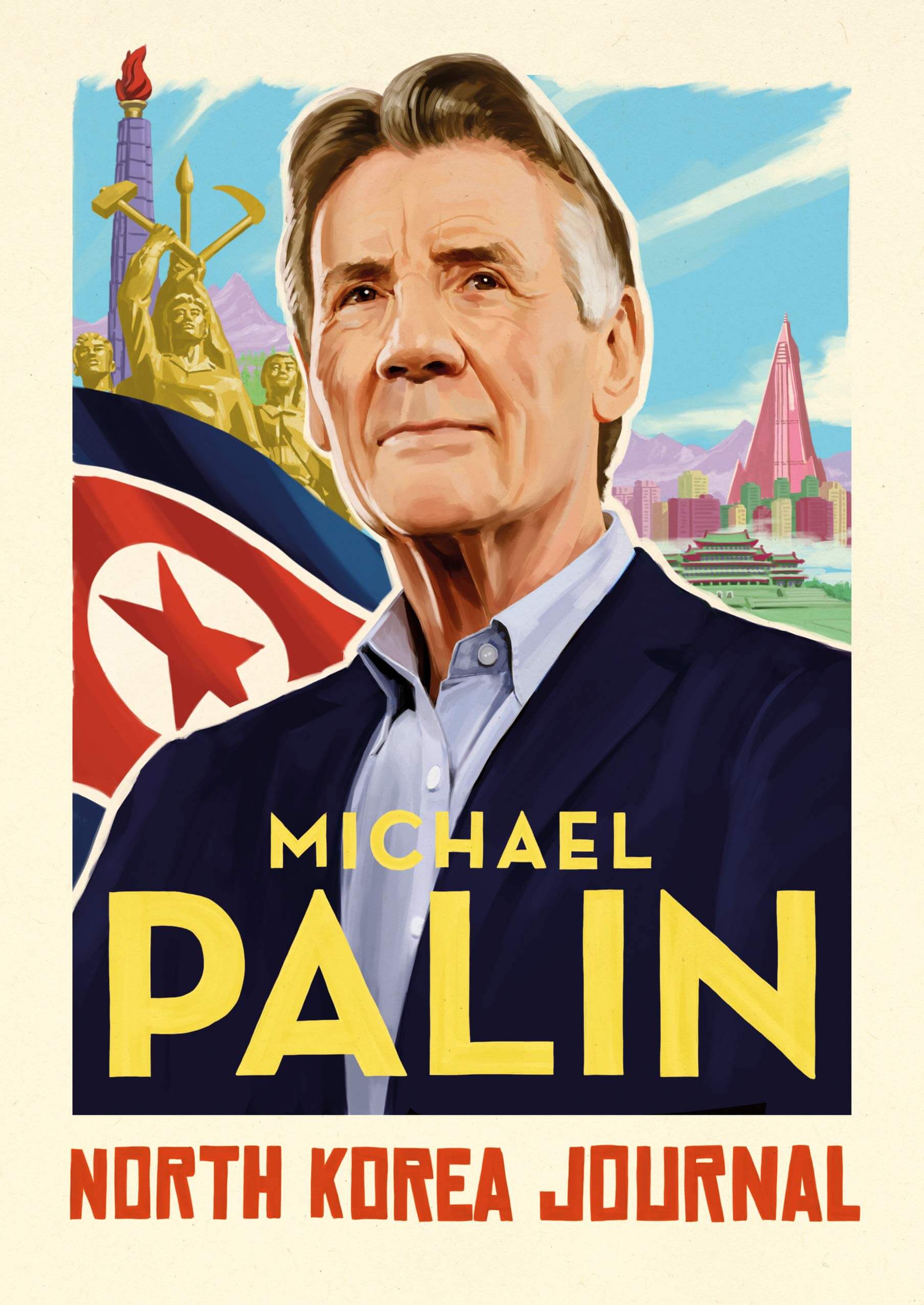 I met Michael Palin in Melbourne in the early 1990s, while he was promoting his most recent travel book. His charm and wit were immediately obvious. Up to then, he was best known for being a member of the BBC’s famous The Monty Python Flying Circus (1969-1974). His anti-Marxism was clearly seen in his “Communist Quiz” sketch, in which Marx, Lenin, Che and Mao appear on an English football TV show. The Communists failed to answer basic questions about famous soccer players. In the sketch, German and ancient Greek philosophers play soccer, while Karl Marx wanders around the field aimlessly. Palin is now a noted travel writer and documentary presenter. He started in 1989 with his Around the World In 80 Days, and in 1997 in his Full Circle, he glimpsed North Korea from the South Korean side of the DMZ (Demilitarised Zone). In 2018 he wanted to see Korea from the other side.

Delving into Palin’s documentary companion book, North Korea Journal, provides an insight into how the right spreads disinformation about the communist country. He begins in his inimical eloquent style. Crossing into the DPRK from China over the Yalu River: “A socialist market economy slips away, and a largely unreformed command economy starts to emerge between the flashing black beams of the bridge.” He continues, creating an ever-threatening image of a sinister country in which he would be lucky to get out alive. “Maps, guide books, and internet access were all denied to me as I travelled in North Korea. The daily journal which I wrote up every evening was the only way I could record my personal impressions of this eccentric land. And I lived with the daily fear that I might lose that as well. Fortunately, we left the country together, my journals and me. And they have quite a story to tell.”

By the end of the book Palin concedes that, “for all the access we’ve had here, for the increasingly warm relations between us and our minders, they’ve been playing a game with us. We have been indulged but never fully informed. We have been allowed more sustained access to this cagey country than most broadcasters, but I still feel that we have been subtly manipulated for some greater end.”

In the final paragraph of the book, Palin writes, “the trip has been an eye-opener, a chance to look behind the headlines and see this secretive country as few other westerners ever will. As Pyongyang recedes into the distance, we turn and exchange smiles. Of relief, but also of regret. One thing we all agreed on at our farewell meal last night is that none of us would mind coming back.”

Reviewers attacked Palin for not portraying the real DPRK. The Kirkus Review complains that, “Palin is not quite as funny here as he usually is, but that’s a small wonder given that he is chronicling his travels to one of the grimmest places on the planet.” The Waterstones Review describes the DPRK as the “notoriously secretive Democratic People’s Republic of Korea, a cut-off land without internet or phone signal, where the countryside has barely moved beyond a centuries-old peasant economy, but where the cities have gleaming skyscrapers and luxurious underground train stations.”

This image is maintained by the right-wing journalists prevalent in Australia’s mainstream media. TJ Collins in his review for The Canberra Times, “North Korea Journal, by Michael Palin, is a problematic account of a highly orchestrated trip to the world’s most secretive country.” Collins says of Palin, “Palin’s book would probably lead you to think that North Korea is a pretty weird place, but not that bad. Of course, the truth is far more sinister than that, which is why the North Koreans go to such extraordinary lengths to distort and obscure it.”

Palin had created an atmosphere of a hermit country sequestered away, from which his team would be lucky to escape. Why does Palin write this when he was travelling with his camera and production team, who had been granted access to travel throughout the country and film whatever they wanted? Is there something deeper here than sensationalism?

He describes how he only had fleeting views of what the authorities wanted him to see, yet recounts the conversations he had with the country’s inhabitants, who talked candidly to him. He regards the land as wholly unlike any other he has ever visited, one that inspired fascination and fear in equal measure in this rare insight into North Korea. The truth is that Palin did see the real DPRK, yet he refused to believe it because his prejudiced image, created by the international media, likened the country to some giant Auschwitz.

By the end of filming, Palin was perplexed that he had not uncovered the real DPRK: the downtrodden peasants, the giant prison camps, the death squads, and the endless poor living in abject poverty. He sits down in front of the camera, so completely baffled that he could not comprehend that what he saw was the real country. He could only assume that he had witnessed a manufactured image of the socialist country, in which the poor were better treated than the poor in his own country, the United Kingdom.

I travelled to the DPRK a few months after Palin’s visit and witnessed what he would have seen, and I know that he did see the real DPRK. People are shocked when I tell them I had been to North Korea and thought I was brave to enter such a country. In reality, I felt safer there than when I travelled in the US. People refuse to believe me when I tell them what the country is really like.

Palin had fallen under the spell of a system of political mendacity, of the perpetual lies manufactured by the US State Department and the CIA, which spread its influence by journalists and academic writers. They created an image of a vicious dictator craving power crushing the downtrodden mass. This image is more relevant to the vicious South Korean dictator, President Rhee, who was responsible for the death of 100,000 people by 1950. US Senator Hiram Johnson writes in 1917 that, “The first casualty when war comes, is truth.” This manufacture of political deceit and falsehoods goes back to 1945 when the US and Russia divided the country along the 38th parallel. During the Korean War (1950-1953), when the United Nations forces (United States, Britain and Australia) fought alongside South Korean troops against the KPA (Korean People’s Army). It was only after massive provocation by South Korean attacks across the border, that the KPA attacked below the 38th parallel. US army officials and politicians thought it would be a short war. Their racist views saw Asians as ill-trained and little better than sub-humans. They were wrong.

As the war ended in an armistice, Britain is technically still at war with the Communist country. It, therefore, would be against national security to portray the North Koreans in anything but a negative light. The resultant negative image has been strengthened by defectors who could not enter the US as economic refugees, so they created stories of how bad life was behind the DMZ. Each defector creates a more scurrilous image of North Korea. This was often a requirement by the US State Department before defectors were allowed to settle into the USA. Their stories quickly collapsed when questioned by the UN. Unfortunately, these lies and deceit have been so commonly repeated in the media that the majority of people believe this twisted image.

North Korea feels that it cannot let its guard down due to the ever-present American military threat, which is why it has the 4th largest army in the world. Almost a quarter of the entire North Korean population (males and females) are members of the armed forces and reserves. These military personnel also work on farms, factories, and building sites, so they are not seen carrying weapons around the towns and cities. I witnessed people casually chatting to soldiers and the police, which would not happen under a brutal dictatorship. On several occasions, when I was at parades or activities, I was seated not far from President Kim Jung Un. When he saw us, he smiled and waved. The public treat him as a pop Star, and they actually do have great respect and fondness for him and he for them.

An industry has been set up to construct, manufacture and perpetuate disinformation and lies about this socialist country. There is no evidence that the USSR placed Kim Il Sung as a puppet leader despite US accusations. Rather than a pauper economy, by 1950, the DPRK had rebuilt the cities destroyed during World War II. Its economy was bigger, and its population had a better standard of living than that of South Korea. US dropped 698,000 tonnes of bombs on North Korea, more than the US dropped on the Japanese Empire. The cities and infrastructure were rebuilt despite crippling sanctions, which included the ban on imports or the manufacture of chemical fertilizer and fuel for tractors and transport. Today life is better than under the Japanese occupation, the rule of the emperor, or under President Rhee.

Religion is a major issue on which the DPRK is attacked for its lack of Human Rights. North Korea is trying to preserve its traditional religious customs and beliefs and, therefore, forbids Bibles. This argument that the DPRK is against freedom is used in Mike Kim’s Escaping North Korea: Defiance and Hope in the World’s Most Repressive Country (2008). The conservative Christian group, Crossing Borders, helped farmers adjust to the new country after leaving North Korea for China following the 2008 famine.

As AB Abrams writes in his Immovable Object: North Korea’s 70 Years at War with American Power (2020), “The US State Department for its part purposely withheld evidence from the United States Security Council when calling for a military intervention from the United Nations Security Council against the DPRK […] the resolution it introduced, UNSC Resolution 82, also asked for a ceasefire directed solely at the KPA (Korean People’s Army)”.

The reason the US provoked the North Koreans into a war is clearly stated by the famed journalist IF Stone, who writes in his Hidden History of the Korean War (1950-1951): “The dominant trend in American political, economic and military thinking was, and is, a fear of peace”. The Military Industrial Complex creates jobs and profits for large corporations and peace does not create profits. President Truman knew this well. With the end of World War II the GDP of the USA fell twenty per cent in 1946, a bigger economic slump than that at the start of the Great Depression in 1929. None of this is mentioned by Palin.

North Korea Journal was published by Cornerstone, UK, in 2019, and the documentary was released on Channel 5 ITN. Soon afterwards, Michael Palin was knighted by the Queen for services done for the Realm in documentary writing and filming.