A joint article by the Chinese and Russian Ambassadors to the US decrying the so-called Summit for Democracy is a clear declaration of opposition to the upcoming event as an evident product of Washington’s Cold War mentality, which will only create new “dividing lines.” The high-profile joint message also serves as a reminder for the public about how painful the ideology-driven confrontations used to be, and that some former Soviet republics are still recovering from the aftermath of US-led colour revolutions, while it’s crucial for countries like China to find their own paths, experts said.

In an article entitled “Respecting People’s Democratic Rights” published by Qin Gang and Anatoly Antonov, the respective Chinese and Russian envoys to the US, in the US magazine National Interest, the two diplomats described the Summit for Democracy, which is scheduled on 9th and 10th December, as “an evident product of its Cold-War mentality,” which will stoke up ideological confrontation and lead to a rift in the world, creating new “dividing lines.”

“This trend contradicts the development of the modern world,” the article said, noting that China and Russia firmly reject this move.

After the Biden administration released an official “participant list” for the summit on State Department’s website, which includes the island of Taiwan among sovereign countries but excludes countries including China, Russia and Singapore, Chinese and Russian officials denounced the move of using so-called democratic values to instigate new confrontation. Chinese State Councilor and Foreign Minister Wang Yi said on Friday that the summit will only create division and bring negative energy to the world.

“The practice of democracy varies according to different national conditions and cannot be one template or one standard,” Wang said.

The Kremlin also believed that the summit is a US attempt to draw more division lines, with TASS reporting that Antonov and Qin elaborated on this point of view further in the article in the US magazine.

“Democracy is not a prerogative of a certain country or a group of countries, but a universal right of all peoples. It can be realised in multiple ways, and no model can fit all countries,” the article said, and “no country has the right to judge the world’s vast and varied political landscape with a single yardstick, and having other countries copy one’s political system through colour revolutions, regime change and even the use of force goes against international law, and is obviously anti-democratic.”

China and Russia are on the same page in their response to the US-led summit by sending out the joint message that US democracy does not represent all forms of democracy, and the US model can’t fit all countries and democracy cannot be used as an excuse for interfering in other countries’ internal affairs, experts said. They also noted that it’s also a clear reminder for the people to not forget the history of the fall of the Berlin Wall, disintegration of the Soviet Union, and US-instigated colour revolutions, which all resulted in huge repercussions worldwide.

The US’ so-called democracy summit is just another example of its common practices – interfering in other countries’ internal affairs under the guise of “democracy,” Wang Xianju, deputy director and research fellow at the Renmin University of China – Russia St Petersburg State University Russian Research Center, told the Global Times.

The Soviet Union was plagued by this US-imposed influence in the final stages of the Cold War. “The US attacked the Soviet Union’s political, economic and social system while calling for colour revolutions,” Wang said, noting that due to the lack of a decisive response from the central government of the time, “the individual member states and the central government were divided and became a fragmented mess.”

When the global political environment was clouded by drastic changes in the Soviet Union, Eastern and Central Europe in the late 1980s and early 1990s, with a wave of “liberalisation” or “democratisation” driven by US-led Western ideologies, many forces were trying to utilise the trend to bury socialist regimes once and for all.

In China, the incident that occurred between spring and summer in 1989 was exploited and hijacked by some foreign forces and domestic extremists, and later escalated into riots. However, in contrast to the disintegration of the Soviet Union, which was mainly caused by problems in its Party leadership, the Communist Party of China later made decisive moves to stop the turmoil, end the riots and stabilise the domestic situation to restore stability and order, which gave the public a clear understanding that any engrafted democracy or inculcated Western ideas would not survive in China and would only “instigate instability”.

“From former US president Ronald Reagan to George W Bush to Bill Clinton, they just dropped their slogans or ideas about democracy like ‘a cure’ for other countries, but all the consequences, pain and outcome of putting those ideas into practice had to be undertaken by the people of those countries, where so-called democracy was forced upon,” Zhu Ying, a professor on human rights and international law from Southwest University of Political Science and Law, told the Global Times.

Zhu said the way Biden planned this so-called democracy summit by bringing up ideological divides reminded him of Reagan’s speech before the fall of the Berlin Wall, which also marked blatant interference in other countries’ internal affairs using the excuse of democracy.

“Russia has almost got rid of the aftermath of the ideology-driven confrontation over the past thirty years, while some post-Soviet states are still struggling under forced US democracy, and are trying hard to explore their own paths for national independence and development,” Zhu said, noting that people should not forget what has happened in the past.

The post-Soviet states that have survived the inoculation of “American democracy” with ambiguous consequences for themselves are now actually faced with a difficult choice: joining the updated “Western club” or preserving their state sovereignty, Sergey Biryukov, a professor at the Siberian Institute of Management in Novosibirsk of Russia, told the Global Times.

“The choice of their national elites and societies will be decisive in this case – but it is obvious that such an enforced opposition is absolutely counterproductive,” he said. At the same time, there is confidence that the US will not be able to successfully expand the “club” of its “fellows” in this way – with the exception of several states that are already under their sphere of influence, Biryukov noted.

A large number of the former Soviet Union countries in Central Asia and Eastern Europe have continued to be subject to such US attacks after the dissolution of the Soviet Union, and one example is Ukraine, experts said.

“In Ukraine, the US-instigated internal colour revolution and used it to restrain Russia. Ukrainian citizens now have not even brought their living standards up to those of the Soviet era,” Wang said.

In Central Asia, the US-supported Kyrgyzstan as a so-called “island of democracy”. Subsequently, hundreds of NGOs fostered by the US were formed in the territory to oppose various governments and policies as demanded by the US. In the past thirty years, Kyrgyzstan has seen three abnormal regime changes, the Chinese expert said.

A truly democratic government would support democracy in international relations. It will not foster hegemony and division abroad while building democracy and unity at home, according to the joint article by the Chinese and Russian ambassadors.

China and Russia also called on countries to stop using “value-based diplomacy” to provoke division and confrontation, to practice mutual respect and win-win cooperation in international relations, and to work for harmonious coexistence between countries with different social systems, ideologies, histories, cultures, and development levels, according to the article.

After the Soviet Union disintegrated, some countries were founded in accordance with the model of US democracy, which however resulted in long-term social turmoil or deteriorating national strength, Yang Jin, associate research fellow at the Institute of Russian, Eastern European and Central Asian Studies under the Chinese Academy of Social Sciences, told the Global Times.

“The so-called Western-defined democracy has not brought prosperity to those countries, but pain. For example, in some Central Asian countries, the living standards and economic growth have yet recovered to the level of the Soviet Union era,” he said, noting that democracy should be built on the basis of improving the fundamental rights of citizens.

The Russian expert also noted that the approach of the US and the West to draw up dividing lines today will further encourage China and Russia to move even closer and be more united on the basis of an already existing strategic partnership.

“It seems that such rapprochement in the fields of security, defence, economy, and communications will be noticeably intensified in the near future, mainly on the basis of special bilateral agreements and existing organisations,” Biryukov said, noting that the creation of such a balancing pole will probably reduce the threat of global confrontation and the risks associated with it. 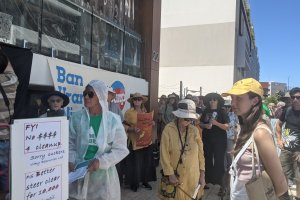