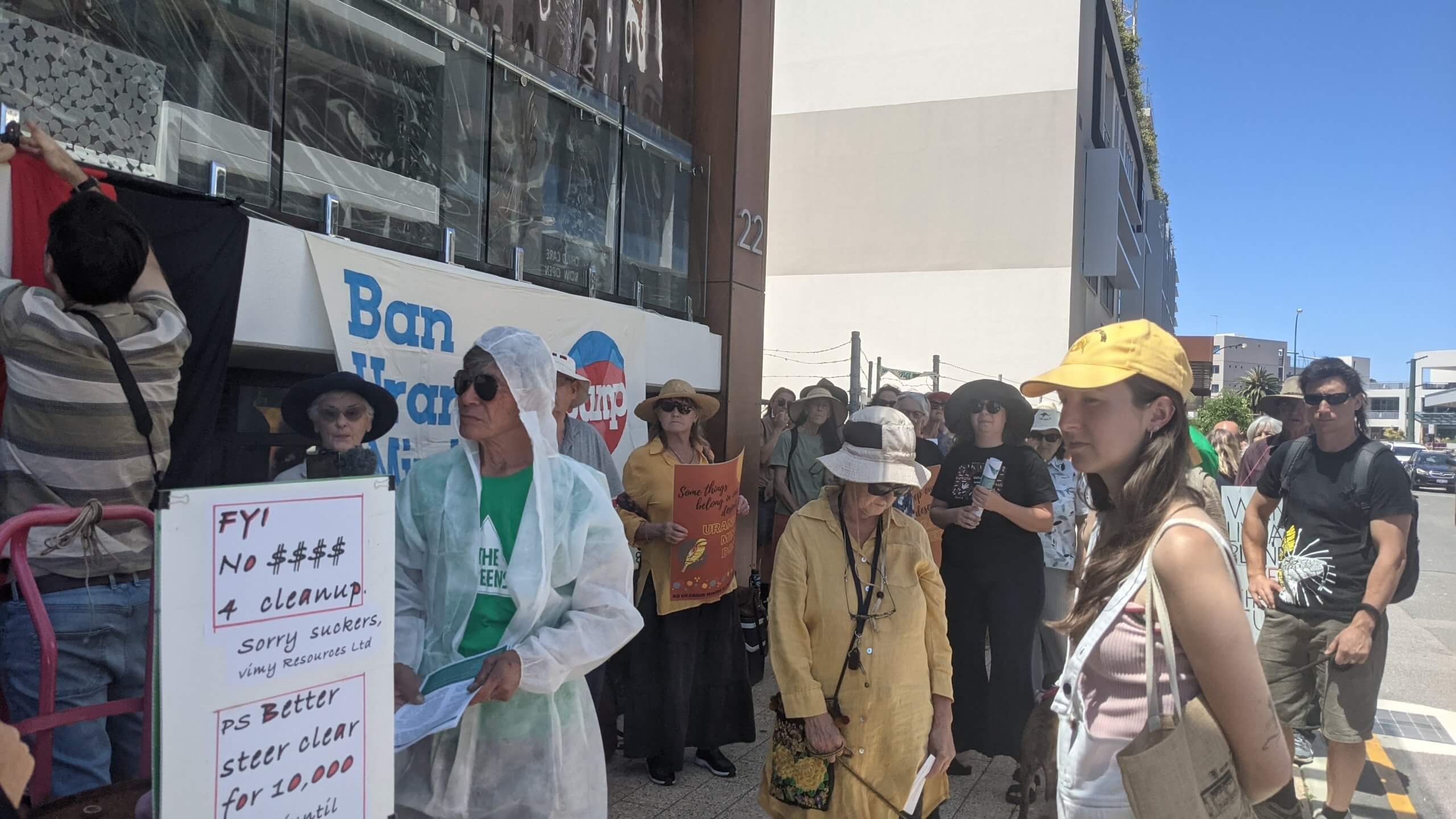 On Friday, 26th November, fifty anti-uranium mining protesters, including traditional owners, attended a rally outside the headquarters of Vimy Resources in South Perth for its Annual General Meeting.

Vimy Resources was granted preliminary environmental approvals by the then-Liberal Barnett Government in December 2016, shortly before it was voted out of office by the ALP led by Premier Mark McGowan, who opposed uranium mining.

The conditions of its initial approvals were that it had to make significant progress within five years towards providing a number of specific plans, permits, and approvals, including uranium export approvals, safeguards approvals, permit to transport nuclear material, permit to establish a uranium mining facility, a conservation plan for a threatened species – the Sandhill Dunnart – which is native to the area, and a land use area agreement with the Upurli Upruli Nguratja native title claimants.

The first speaker was Mia Pepper of the Conservation Council of WA, who said we need to spend money to promote environmental sustainability through building more renewable energy projects. Sustained action by the conservation movement in WA over the last forty years has ensured that this state has not produced uranium in the previous ten years. Pepper said that notwithstanding Vimy Resources having the appropriate approval from the government nor having consulted with traditional owners over the land, they had started land clearing at the site.  However, if Vimy Resources has not made substantial progress by 16th December 2021, towards meeting its environmental and operating approvals, their permit to operate at Mulga Rock expires.

The next speaker was Steve McCarthy, Secretary of the WA Branch of the Australian Manufacturing Workers Union, who said that uranium mining was a dangerous operation. McCarthy added that WA should learn from what happened at Wittenoom with the mining of asbestos, where private corporations made money from digging up asbestos but had not cleaned the site properly or looked after workers, many of who had suffered terminal illnesses as a consequence of their work at the mine. The project would also not create as many long term and sustainable jobs as the renewable energy sector.

Debbie Carmody, an Anangu woman and one of the traditional owners of the land at Mulga Rock and a member of the Upurli Upruli native title claimants, read from the statement that she would read at the AGM of Vimy Resources. Carmody said Vimy Resources had not conducted an Aboriginal heritage survey on the site that had special significance to Aboriginal women and their social and cultural practices.

Richard from Independent Peaceful Australia Network addressed the rally to say that given the urgency of climate change and its consequences for the world, now was not the time to mine uranium. Richard noted that nuclear energy was not clean or green as nine out of ten stages of the nuclear fuel cycle require the burning of carbon-based fuels to get to the use stage.

Australia had also recently entered into a contract to buy and operate a fleet of nuclear-powered submarines, and arguably this had emboldened uranium mining entities such as Vimy Resources, who believed that this might stimulate demand for the nascent nuclear power industry in this country.  However, the price of uranium ore was still under US$45 a pound, making the project unviable as, according to Stockhead, the “magic number” needed to make a mine viable was US$60 a pound.

The following day, in the West Australian, a report on the protest outside the AGM of Vimy Resources appeared and it revealed there were resignations from several senior executives at the company. It further noted that some executives also flagged resignations ahead of the looming deadline to meet Ministerial approval for the project on 16th December.

The Communist Party of Australia (CPA) supports the opposition to the proposed uranium mine. The CPA oppose the proposal for nuclear submarines and any nuclear energy proposals for the risk it presents to people’s health and safety, including the workers who often suffer from various cancers due to working with uranium.