Don’t tread on the Eureka flag 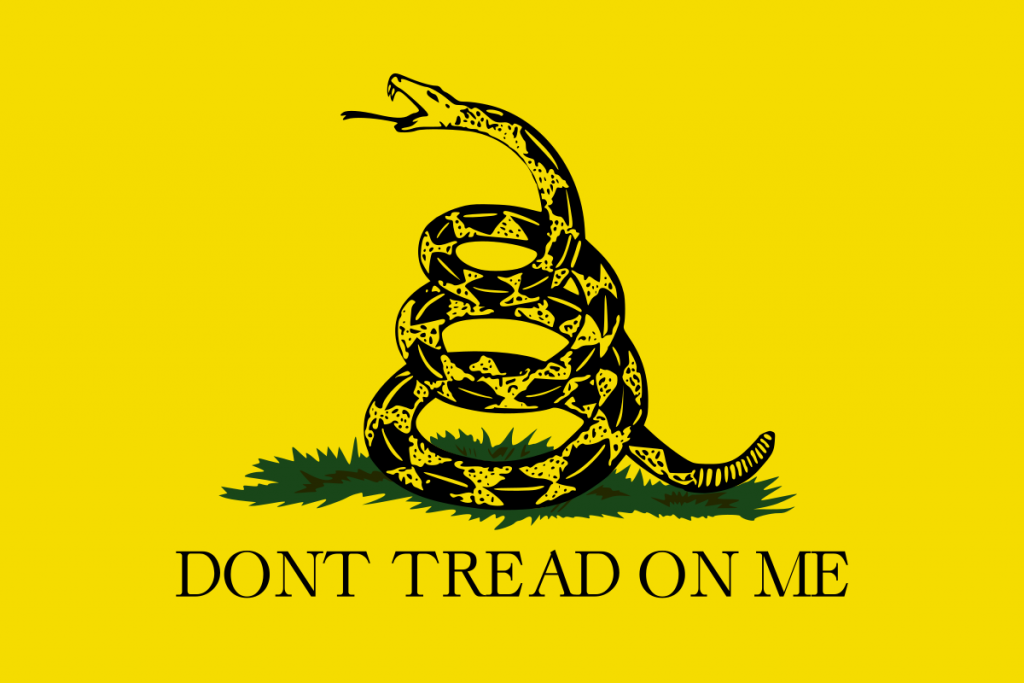 Present at the rash of recent protests around Australia are a multitude of colourful symbols to go with the colourful slogans and props. In this article, we’ll put to the side major discussion of these protests and their aims to instead focus on some flags. The Eureka flag is present at a large amount of Australian protests. It is blue with a stylised Southern Cross upon it. Recently there is also a strange yellow flag present. It has a coiled rattlesnake upon it over the text “DONT [sic] TREAD ON ME.” This flag is called the Gadsden Flag. The flags have a shallow similarity in that they are perceived as flags raised in rebellion or resistance. However, their origins are rather different to their current usage.

ORIGINS OF THE FLAGS

The Gadsden flag has its roots in the American Revolutionary war, which was a national-bourgeois revolution against the British. The snake represents the colonies of what became the USA. It was created by politician Christopher Gadsden and flown by the Continental Navy (of the US forces). The outcome of this war was that the United States of America gained independence from the British Empire and could set about establishing its federal democratic republic. This flag remained popular in its state of origin (South Carolina) and was adopted by various groups over the years. In the 1990s, far-right Patriot militiamen adopted the flag, and it was sold in far-right Militia of Montana catalogues. The flag was displayed at anti-immigration “border watches” such as that in Arizona in April 2005. In 2009, the Tea Party adopted the flag and further popularised the yellow banner.

The Eureka flag comes from a struggle by workers on the goldfields in the 1850s against the mining licence and abuses of the state amidst declining gold yields. The banner was flown by the Stockaders, who swore an oath under it at a mass meeting of miners. These meetings are what gives the Eureka its worker-democratic connotations. The brutality meted out by the police and military in the early hours of the 3rd of December in Ballarat in 1854 created a surge of popular urban support for the stockaders and a lot of dissent towards a conservative draft of a Victorian constitution which favoured squatters and landowners. The outcome of the Eureka Stockade was limited suffrage for men expressed as the Electoral Act 1856 (see Guardian issue #1988).

In 1775 the threat to the fledgling American colonies embodied by the coiled snake was the British Empire. In 2021 at the American Capitol riots, the treader was seen to be the allegedly illegitimate American Democrat government. Over the history of its usage, the Gadsden flag has been flown at events that can broadly be described as American anti-federal-authority events. The authority that supersedes federal authority is either a smaller American government or law enforcement authority, like a state government or a county sheriff or the reliable fallback of the smallest minority group in existence: the individual. The usage of the Gadsden flag at these Australian rallies against various Australian governments is ahistorical and absurd.

Today, the Eureka flag appears at rallies that involve the working class and groups that wish to associate with or pass as the working class. The flag appears on either side of the police line at demonstrations as it is displayed by a wide variety of social movements. Everything in Australia happens on stolen land. The Eureka Rebellion did not address this contradiction. The Eureka flag has perceived and disputed characteristics and is flown by many groups and movements in contemporary Australia. As well as the left and progressive groups, sections of the right have latched onto the anti-establishment character of the Eureka Rebellion and co-opt the flag accordingly. The Eureka Stockade and its symbols loom large in the historical imagination of Australia.

Today we can see both of these flags flown next to Trump flags and the Aboriginal flag at rallies against the state government in Victoria. This only makes sense if you don’t think about it very much. Both flags are “resistance” flags, and so both flags pass wherever “resistance” is required. Without going into the bewildering particulars of the recent protests let’s consider some movements.

The use of the Gadsden flag at contemporary rallies in Australia is evidence of the imported character of much of this social movement. The movement encompasses a grab-bag of right-wing-libertarian-populist issues. References to US Constitutional amendments, Trump flags, a kind of “Australian constitutionalism” and a vague insistence on “freedom” are further signs of importation. Conspiracies about some kind of international central government, control of our state government and/or the world are the concerns of the conspiracy-right. Allegations that this or that elite is a pedophile or that communists control state or federal government are right-populist tactics exported by various online conspiracy groups and sympathetic media organisations. They have no distinct Australian character other than the proper nouns have been changed.

Ideas of scientific socialism/communism came initially from overseas (although there were elements of precapitalist communism among indigenous societies), but these were adopted by working class forces in the founding of the CPA in 1920. It did not originate in Australia and it has its own flags and concerns. Currently, communists do not control the state of Victoria. Simply put, the goal of communists is the redirection of production to serve human need through the dictatorship of the proletariat. We consider this to be something much closer to freedom than the current bourgeois-democratic system. We see the Eureka as a flag of workers’ organised resistance. The yellow flag is American detritus with no relevance to our struggle.

Flying the Gadsden flag in Australia is part of American soft power – along with their slogans, social networks and two out of three of the approved COVID-19 vaccines. It represents a sad failing of the imagination of a movement of would-be rebels along the lines of the failings of our federal government in slavishly ceding our foreign policy decisions to the USA.

Flying the USA-small-government flag next to the Australian anti-Victorian government flag only makes sense if you don’t think about it very much. Once both of the flags are reduced only to their “resistance” characteristic, they become merely merchandise. The history of the Eureka flag has a place in our continuing Victorian-Australian struggle. The history of the Gadsden is an American history which does not map onto the struggle at the goldfields or the push-back against current Australian governments.

To a moderate extent, the use of the Gadsden in the Australian context perhaps can be excused as a lack of antipodean imagination – another example of our paper-thin sovereignty. The Gadsden and Eureka flags are flown out of context both to represent some kind of “resistance”. The Gadsden has no coherent place in Australian movements which can be derived from its history. The Eureka does.

You can see attempts to insert the Gadsden elements into our symbols. There is a Eureka flag defaced with the snake and text from the Gadsden. The history of Australian labour struggle is cheapened by the inclusion of American national struggle. The contemporary conflation of the two issues against current governments is incoherent.

The Eureka is our flag from our labour movement and long shall it fly.

China is a responsible major country in addressing climate change