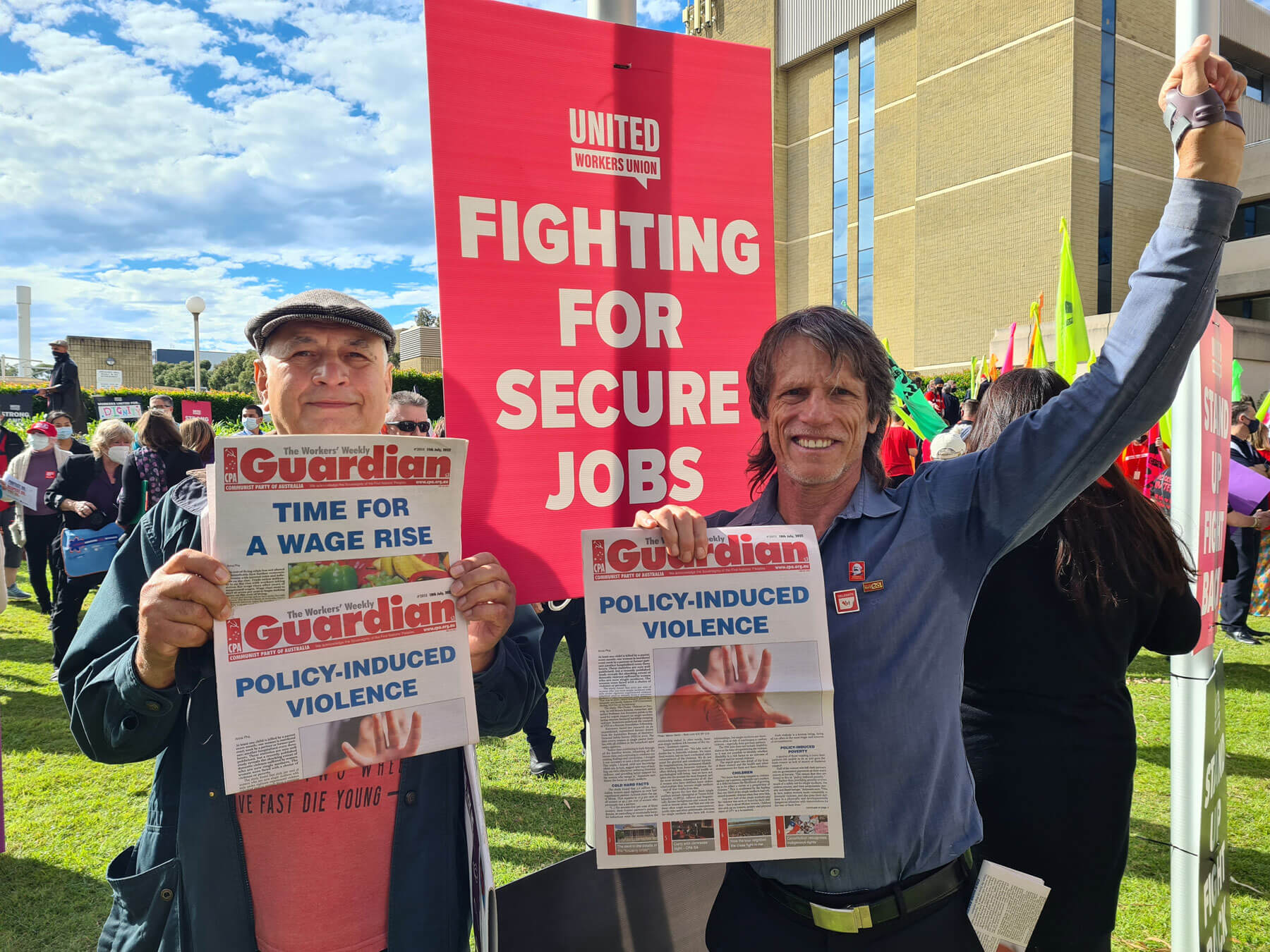 As part of the campaign by public sector workers in Western Australia, members of the Health Services Union and United Workers Union – the two main unions with members working at Royal Perth Hospital – held a lunchtime rally, 20th July, to protest the inadequacy and lack of respect coming from the WA Premier and Treasurer, and in Mark McGowan’s wages policy.

The government, which has capped public sector wages, offered a 2.75 per cent increase, or 2.5 per cent with a $1000 one-off bonus (This offer was increased on 31 July to 3 per cent with a $2,500 bonus. Unions said this would not keep up with cost of living and rejected the offer on 3 August). This offer may have seemed half decent when the Premier Mark McGowan announced it just before Christmas 2021. Now, however, with inflation over 5 per cent and COVID cases on the steady increase again (COVID hospital admissions on the day of the rally were 457 with twenty-two in ICU), health workers are feeling the strain and not being rewarded appropriately for their dedication and service.

The 300 public sector workers in attendance included members from other unions with members at the hospital, including the Construction, Forestry, Maritime, Mining, and Energy Union (CFMMEU), the Electrical Trades Union and the Plumbers Union (PPTEU) and members from other unions which are part of the Public Sector Alliance which is coordinating the unified campaign for a 5 per cent per annum wage increase across the WA public sector.

The MC for the event was Community and Public Sector Union Civil Service Association General Secretary Rikki Hendon who said public sector workers in WA reject the government’s wages policy and call for a better offer for workers who kept this state working through the COVID pandemic, especially health services workers who were among many workers who could not work from home. Other unions represented included the Police Union, United Firefighting Workers Union, Rail, Bus and Tram Union, Prison Officers Union and the State School Teachers Union. Though not part of the PSA, the Australian Nurses Union had on 13 July 2022, also put in their claim for a 5 per cent per annum wage increase.

The first speaker introduced by Ms Hendon was, Kevin Sneddon, United Workers Union, Public Sector Co-ordinator said the rally was sending a strong and clear message to Mark McGowan that the union movement was standing shoulder to shoulder. We also lived in the richest city in the richest state in Australia and while the wealth seemed to accumulate to a select few, many households need two incomes to survive – and sometimes one of those people has to have more than one job to help pay all the bills. Health services workers spoke of watching their weekly groceries bill rising by $50 per week, half of their wages having to go on rent, having enough money to put their children through school and to feed them and having difficulty affording fuel for the car. The workers spoke of wanting some respect after years of austerity accepting only $1000 pay increases per annum, respect which was in short supply from this state government.  The workers in the health sector and other parts of the public sector spoke of worker shortages which were occurring because some workers could no longer afford to stay in a job where wages were kept so low while household bills increased by far more. Lewis Stevens, Vice President of the CPSU/CSA and a member of his union’s wages bargaining team negotiating with the government said that an increase would only come at present from the government if workers gave up conditions.

Naomi McCrae, Secretary of the Health Services Union of WA decried that in this rich state for the few we need to call this stuff out! We are not going to give up our campaign for wage justice and every one of us here who helps keep the WA health system going, deserves a pay rise that shows respect.

The ABC News reported the Premier as being abrupt in his response to the stop work meeting, saying, “People having a meeting, I don’t think it is a problem.” He acknowledged the pressures facing the hospital system country wide but gave little hope for health workers on the front lines of the pandemic – and the front lines of anywhere in the public sector. This was the second health services stop work in July and the public sector campaign would now shift its focus to a lunchtime rally outside the WA State Parliament on Wednesday 17 August 2022.

The Communist Party of Australia supports the demands of the WA Public Sector workers unions for a wage rise that attempts to stop a slide in public sector wages after more than 5 years of austerity through capped annual wage rises. The CPA calls for a restoration of genuine wage bargaining and for the government to make an increase in its government wages policy that reflects real cost of living pressures and encourages good public sector workers to remain within the sector to help keep critical state services well-staffed and renumerated including health, education, transport, justice, police and community service workers.