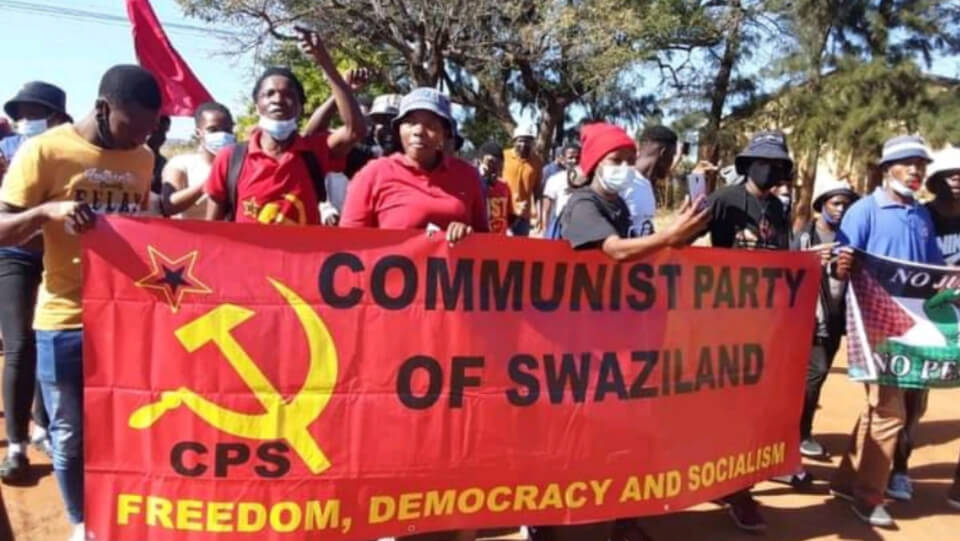 The Communist Party of Swaziland (CPS) held its Annual Political Winter school from 22-24 July 2022 under the theme “The Democracy We Want on Our Own Terms.”

The Winter School was attended by 150 delegates drawn from all over Swaziland as well as from the neighbouring countries. The School also received messages of support from Swazi and international revolutionary organisations.

The CPS 2022 Winter School convened amid ongoing gross human rights abuses by the Mswati autocracy mainly through its army and police. This is in the context of deepened brutalisation of the people in the regime’s desperate attempts to stop the democracy wave.

Political parties remain banned in Swaziland since 12 April 1973 when Sobhuza II imposed the absolute monarchy system with political advice and direction from the murderous and racist South African apartheid regime. Over the decades, the people of Swaziland engaged in mass protests for the end of the autocracy.

Since 2021, the people organised themselves for unprecedented protests for the total dismantling of absolute-monarchy rule and its replacement by a democratic republic.

As per its tradition, the Winter School focused more on practical measures for comrades to wage the struggle. It is more action oriented.

To take the struggle forward, the CPS thus convened the Winter School to discuss principles of our struggle, units of struggle, organising for the struggle in our conditions, as well as engaging on critical considerations regarding the importance of secrecy and defence of power.

CPS General Secretary, Comrade Thokozane Kenneth Kunene, in both his opening and closing remarks, stressed the need for communists to be on the forefront when it comes to revolutionary action.

“We have no choice, comrades. This revolution needs us. We need to take practical steps to lead, unite and direct the revolution, otherwise the liberals will divert the struggle and preserve the hated monarchy, as we have seen them attempt to do so over the years,” stated the General Secretary.

While the liberal forces habitually place people’s hopes on external and international institutions such as Southern African Development Community (SADC), the CPS always insists that the future of the people of Swaziland rests within themselves, and that it is the people, united in action, who should lead the revolution.

Comrade Elihle Magagula, presenting on the “Essence of the Struggle,” hammered this point home when she remarked, “We need to understand, comrades, that we are the only ones, the only instrument, as a people, to liberate ourselves from these chains that bind us. Nobody will come from outside to unchain us, except us.”

Comrade Elihle noted that due to the strong opposition faced by the regime from the masses, Mswati’s forces have for the first time ever been pushed to a defensive position. As a result, the police no longer roam around the streets freely.

“The junior police, for instance, have begun to voice out complaints that they are now the main targets of the revolutionary forces, without adequate protective material such as bulletproof vests, while their commanders are safe and secure,” elaborated Comrade Elihle.

Comrade Elihle added that the revolution is always a practical reality, and thus practical work must be carried out to ensure that the junior police officers’ fears are converted to favour the revolution.

“Since the junior officers are the ones taking the orders, and thus directly face the revolutionary fires, it is important that they be made to abandon their attacks on the people and, instead, defy orders from their commanders and, additionally, turn their guns against their superiors, and this is urgently necessary,” emphasised Comrade Elihle.

Swaziland is on the brink of a fully-fledged civil war. This coming war is a result of the regime’s conduct over the decades of tinkhundla oppression. The regime’s stubbornness in the face of calls for change has fuelled the people to comprehend that this regime does not care about them. The people are now acting in a revolutionary way, refusing to compromise. They are fearlessly resisting the authority of the government over their lives. They have committed to rendering the country ungovernable, as part of the “Democracy Now” campaign launched by the Communist Party of Swaziland in 2019, building on previous campaigns.

For the people to win over the autocracy, the correct strategy and tactics must be followed.

The CPS, along with the working class, leads the people’s struggles “towards a socialist society based on equality and to end class subjugation and divisions,” as CPS Central Committee Member and Head of Women Commission, Comrade Gabi Ndukuya, stated in her presentation on the “Strategy of our Struggle.”

Presenting on the “Tactics of our Struggle,” Central Committee Member and Deputy Commissar, Comrade Mancoba Motsa, called upon comrades to pay particular attention on the ebbs and flows of the revolution in order to devise the best tactics at each point of the struggle without undermining the strategy of the working-class struggle.

The struggle now has more risks than ever before. We have seen, for instance, the deployment of the army in various communities. The army has gone on to harass, assault and kill civilians. Vigilance is thus essential at this point.

CPS National Organising Secretary, Comrade Simphiwe Dlamini, in his presentation on “Fighting Character”, as one of the units of struggle, emphasised the need for comrades to maintain vigilance at this point of our struggle.

“Let us remember, comrades, that we must never expose ourselves to the enemy,” said the National Organiser.

“We must learn the art of hitting the enemy and at the same time conserving our lives and energy as we continue to organise the people of our country,” emphasised the Organiser.

Through practical action on the ground, the CPS has over the years of its life amassed vast experience in leading community struggles. Among the rallies that the CPS leads are the sunset rallies. The CPS is able to adapt to changing conditions as it works hard to form community councils in collaboration with local people.

Through the Winter School, the CPS’s aim was also to deepen the understanding of the political character of our struggle. This, in turn, helps comrades to fully comprehend the correct strategy and tactics of the working-class struggle.

The struggle of Swaziland has reached a point where the people demand that there be an armed insurrection. CPS National Commissar, Comrade Titus Vilakati, presenting on “The Political Character of our Struggle,” emphasised the need to understand that a mere armed uprising does not necessarily translate to a people’s uprising merely because arms are being used.

Learning from the experiences of the Cuban Revolution, the Commissar emphasised that “the political objectives of the insurrection must coincide with the aspirations of the people. This will foster cooperation and assistance from the people, for and with whom we fight for change. Without the support of the masses, any armed insurrection is bound to fail!”

The CPS Winter School will be followed by the Party’s Annual Summer School in December 2022. Between the two schools, study units will embark on continuous analysis of the political situation in Swaziland while the Party continues to mobilise the people for a nationwide mass insurrection. The Party’s study units are rooted among the masses of our people, constantly empowering the people to be agents of their own freedom.