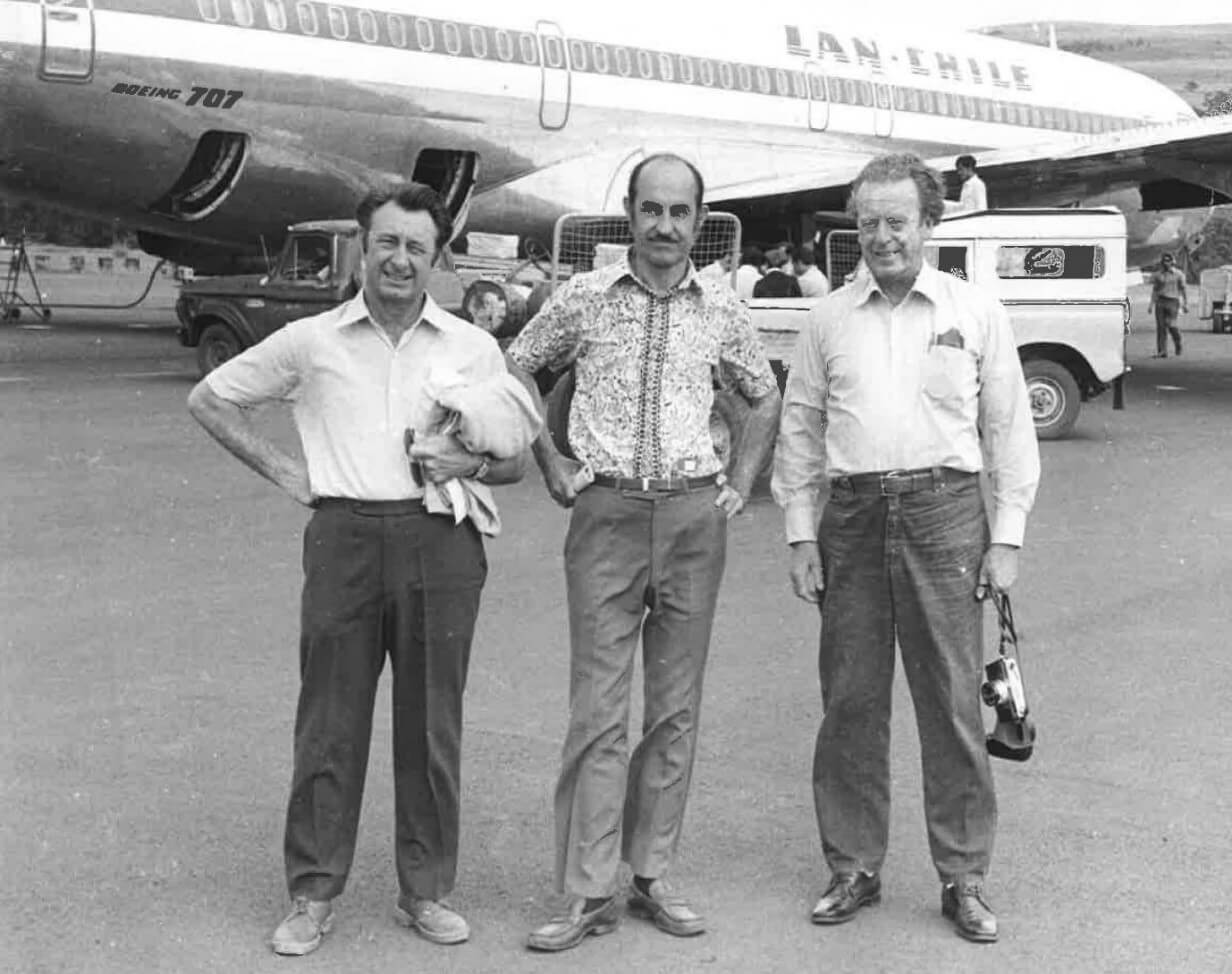 It has been nearly fifty years since the infamous coup in Chile on 11th September 1973. The world became aware of the heinous birth of General Augusto Pinochet’s coup d’état when the international television networks showed the Chilean Air Force’s Harrier jets attacking the Palacio de La Moneda, the seat of government. Truckloads of soldiers across the country arrested thousands of people, who wound up in the thirteen concentration camps where many were tortured and killed. Some supporters of the Popular Unity (UP) government sought refuge in embassies. Others went into exile, including in Australia. The life of President Salvador Allende Gossens, the world’s first democratically elected socialist president, ended that day.

The Pinochet regime tore the fabric of Chilean society asunder, wrenching out the heart of the left. A sinister veil had fallen upon the country, like a plague of locusts devouring everything in its path. The regime’s aim was more than the violent repression of the UP and the left. It wanted to ensure that nothing remained for the next generation to remember, or be proud of them, the cultural, social and economic achievements made under Allende. Pinochet undertook a policy of systemic eradication of everything that immortalised the thousand days of the UP. The junta did more than carry out crimes against the Chilean people, for it attempted to create a year zero, devoid of a Marxist past. Chilean history became before and after the coup.

I arrived in Santiago, the capital of Chile, in March 1974, the same time as an Australian trade union delegation was investigating human rights abuses in the country. It was big news in local Chilean newspapers. Sydney airport workers had refused to service a LAN Chile aircraft. It left the airline’s president, General Michael Stuardos stranded on the tarmac. In return for allowing the plane to leave, Stuardos agreed to invite the Australian union movement to send a delegation to Chile to see “how much happier the people are now” under Pinochet. The delegation included Australian Metal Workers Union officials and CPA members, Jim Baird and Henry McCarthy, Brian McMahon of the Transport Workers Union, Ron Masterson of the Plumbers Union, and Steve Cooper of the Miscellaneous Workers Union. They flew to Chile with the endorsement of both the International Confederation of Free Trade Unions and the World Federation of Trade Unions.

The delegation returned to Australia with a comprehensive account of military repression. Their findings contributed to worldwide condemnation and isolation of the junta and the release of prominent political prisoners. The visit did much to build a Chile solidarity movement in Australia.

I travelled at a time before ATMs, the internet, smartphones, and laptops. If I wanted to contact my family in Australia, I had to send a telegram. If I needed money, I had to go to the local bank to exchange traveller’s cheques or US dollars for the local currency. I was a backpacker and relied on the South American Handbook to find hotels for US$1 per night, where to eat for US$0.50, or what cultural memorials were worth seeing. A network of camaraderie was established amongst backpackers, in which we knew what had happened to whom and where. It was important, as many people I knew had been arrested or disappeared in Bolivia and elsewhere.

I had met numerous backpackers who had been in Chile at the time of the coup. In Buenos Aires, a New Zealander told me he had been arrested in southern Chile. As a non-American, he was taken to the border with Argentina instead of the local concentration camp. At gun point they told him to keep walking through the forest towards the border. Fortunately, he was found that night by an Argentine farmer who was passing by and rescued him. Otherwise, he would have died from exposure and his death put down to a traveller’s misadventure in the wilds, leaving no evidence of the part played by the military.

I discovered later that Secretary of State, Henry Kissinger, had told US embassies in Latin America not to assist US nationals who appeared left-wing. I met many desperate young Americans who had to seek help from the Canadian embassies as their own had failed them. This meant that right-wing governments were tough on US citizens, rather than other nationals such as Australians, as the US would not interfere in the arrests.

I knew from an English couple I had met in Mendoza, that it would be difficult to find anyone from the left willing to speak about the coup. Being left-wing in Chile was a death sentence for teachers, rural reformers, and trade unionists, and especially Communists. More than 4,000 people were brutally murdered by the regime.

When I arrived in Chile by bus from Argentina, the police, soldiers and tanks were in the streets. Talking to, or being overheard by, the wrong people would lead to my arrest. I tried to meet the union delegation without success, nor could I gain access to political activists. I did meet a former police woman who had left the force after witnessing horrific beatings. Indigenous people such as the Araucanians and Easter Islanders were very badly treated.

The streets of Santiago bore witness to the daily struggle to survive, the brutality of everyday poverty and the constant destructiveness that ate away at the very fabric of Chilean society. Military hostility erupted extemporaneously in an unceasing attempt to eradicate any trace of the UP socialist revolution. Even so, what I could do was observe life in the city. Walking around the centre of the capital I saw no sign of the Allende government’s achievements that should have been apparent. It was as if the UP era had never existed. Instead, there was the over bearing presence of the statues of the great heroes, General San Martin and General Manuel Bulnes of the War of Independence from Spain. The city looked grey and uninviting in the early morning light.

The bourgeoisie lived in their oases of great wealth, well protected behind high walls and automatic rifle-toting security guards. They only ventured out into the rich suburbs to eat at their favourite cafés and expensive restaurants. The women sat dressed in elegance, their jewellery portraying their wealth. Some would talk to foreigners. If they gave any thought to Allende, it was to accuse him of bringing economic chaos to the country, giving no blame to the US, which had brought on the crippling sanctions. For them the coup was vital, for it had kept wages low and removed any threat from the hated left. I left the café and looked for a bus.

In contrast, the military entered poor neighbourhoods to arrest and sow discord, to terrorise the proletariat. I found a bus to one of the poorest suburbs to better understand how its people survived. Poverty has a certain smell, whether it was the rotting rubbish in gutters, or the decay of old buildings, I knew I was in a rundown area. In one alleyway there was a queue for bread. Old bread from local bakeries was handed out to the poor. Many people could not afford to buy bread, and depended on the kindness of others. I joined the queue and asked some people how was their life? They were cautious, looking around them before replying. “This is what we have become! A nation of the poor. With rising inflation, ordinary people find it difficult to buy enough food.” In other areas I saw horse and carts, and people chopping down trees in parks for firewood. The poor were cramped together in tiny houses that had seen better days. Wages were low when jobs were available. For those with leftist backgrounds, employment was near impossible. People were dressed in cheap clothes but tried to maintain their dignity.

Even under military oppression and the gut-wrenching poverty of the slums, I encountered friendly people and witnessed the solidarity of those who still resisted military rule. The struggle for socialism continued in the demonstrations against the regime, in the shouts of students, in the graffiti and murals on alleyway walls, and in the memories with the UP believers, in their hearts.

The part played by popular Chilean culture – its support for socialism and the left – had been suppressed yet still survived in these areas. The military continued to erase the graffiti with its left-wing political statements, but it reappeared over the whitewashed remnants. At night voices in alleys still sang the songs of resistance. In a city gripped by fear, the memories had not died. The UP had not disappeared from Chilean history.

I had met some Americans and we had been out at a restaurant. Curfew was 10 PM. The gun turret of a tank followed us as we crossed the street to our hotel. The military were out on the streets, as they were every night.

The next day I took a series of buses from the capital to towns in the north, trying to catch up with the trade union delegation but failed again. Naively I had been taking photographs as I walked the streets, news of which now preceded me. Arriving at the mining town of Iquique, we were stopped at a military checkpoint, where I was taken off the bus. The milicos (military) saw my suitcase and asked if I had political books. I showed them that they were archaeology books I had bought in Peru and Bolivia. I told them I was looking for Incan ruins in Iquique, and I was arrested with a bayonet pushed in my back and led off to a small shed, where an officer interrogated me. I found out later that Iquique had a large concentration camp and the military was wary of foreigners with cameras.

Later, I was put on the back of a truck and driven into the Atacama Desert, the no man’s land between Chile and Peru. I thought I was going to be executed. Instead, I was told to keep walking. Fortunately, I was picked up by a truckload of Aymara Indians from Bolivia, who were doing their weekly trip. The military used to leave backpackers deserted in this arid wasteland, so when their bodies were discovered, they would appear to have died of natural causes – hypothermia and dehydration – another case of misadventure.

Maria Tumarkin describes in her Traumascapes: The Power and Fate of Places Transformed by Tragedy (2005) the feeling of visiting spaces of trauma and great sorrow, places where people had died from accidents or killings. What happens when the whole country is a place of mourning, following a national tragedy? What effect does this have on the people? How does a visitor feel such an experience? Or is the enormity too great to bear witness and understand? Should a new word be created, trauma-nation, to describe the tragedy of those years under Pinochet?

The country suffered severely from the coup and the brutal years that followed, affecting the national psyche. It was not until 2021 that another left-wing government, under President Gabriel Boric, was elected in Chile. My encounter with life under Pinochet aroused hate for the regime and love for the country. Witnessing the UP, and what it stood for, had not perish, made me become a Marxist.