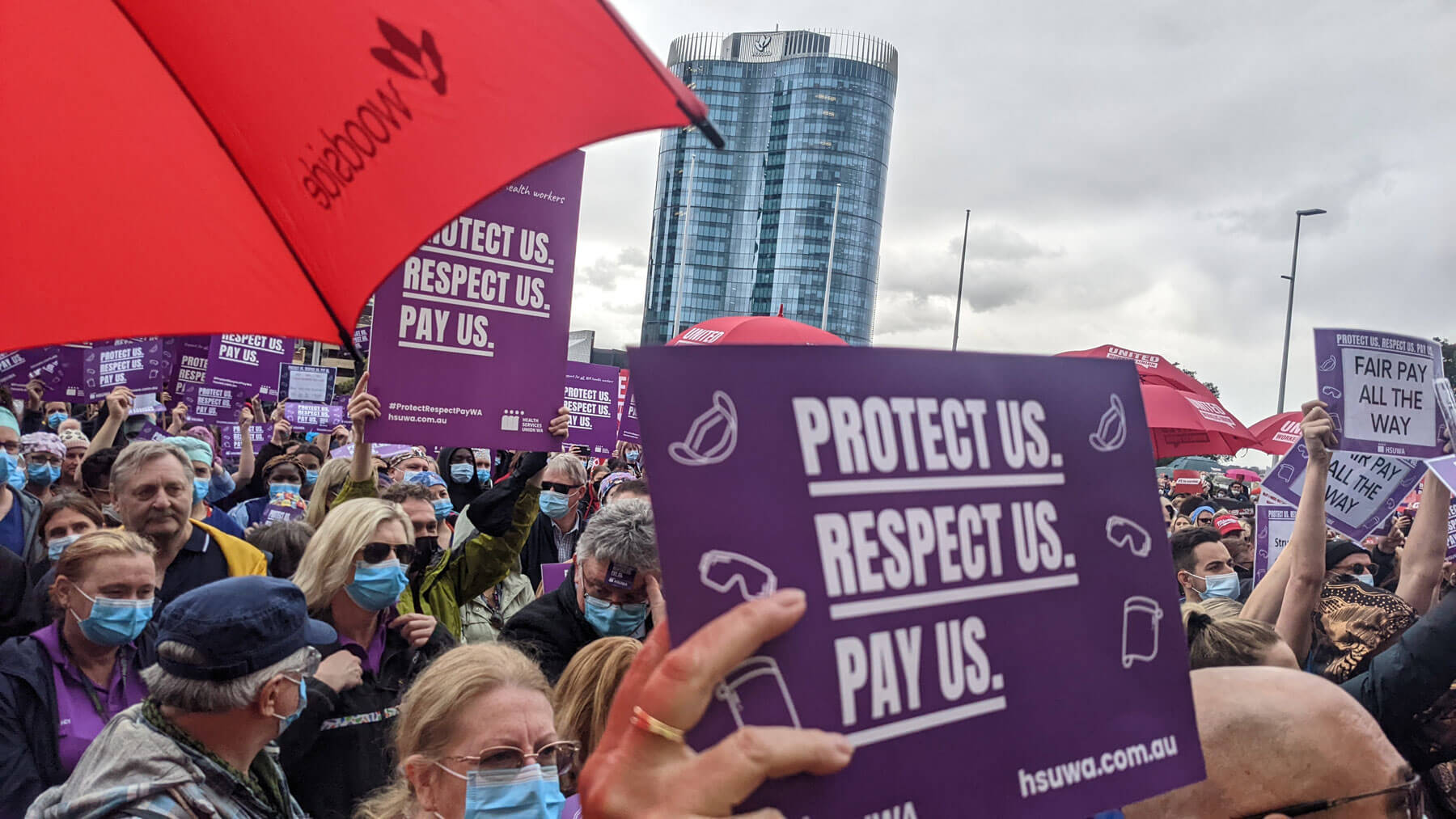 In Western Australia there has been a campaign of industrial activity over the past six weeks by more than ten trade unions who make up the Public Sector Alliance to force the government to abandon its wages policy. This culminated in the rally of State Public Sector unions outside State Parliament on 17th August 2022, attended by over 3000 public sector workers. A welcome to country was performed by Whadjuk/Balardong Noongar elder Professor Len Collard who called for the good spirits to be present in the campaign between the parties and finished with a performance on the didgeridoo.

The rally commenced with Owen Whittle, Secretary of Unions WA stating, “We are here because we have had enough of having a wage cut and having our wages driven down year after year.” The campaign by unions, continued Whittle, “had forced the government to up their offer, but it was still not good enough. They are leading a race to the bottom. The government is the largest employer in the state and that drives down wages generally in this state’s economy.” What was needed, “was genuine negotiation and bargaining by the government with the public sector unions.”

Julie-Maree Hay, an Enrolled Nurse at Royal Perth Hospital and member of United Workers Union, next took the podium to say all public sector workers deserve a five per cent increase as every day is a struggle to meet the cost of living. Hay also said workers were struggling in hospitals because they did not have enough staff and they weren’t able to retain sufficient staff. Work continues to be a challenge in one of the states largest public hospitals as there are, “more numbers of COVID in hospital and people are still dying.” Hay also spoke of the exhaustion, destruction and despair being felt among her colleagues.

Tiffany Pritchard, a medical imaging specialist at a large public hospital and member of the Health Services Union said her work required her to be all over the hospital at any time. Some of her colleagues had left as the pay was too low and they could receive better pay in the private sector. This led to staffing shortages which in turn led to overwork and stress. The answer said Pritchard, was that a pay rise to match the cost of living and work conditions to help recruit and retain workers.

The next speaker was the Minister for Industrial Relations and still a member of the Australian Services. Though he started off by trying to talk up the government’s record of bringing services back in house, the rally had not come to hear that message, but one about showing respect through proper pay – and started to boo and heckle the Minister. He finished his contribution by saying the government would continue to talk to unions, but that all disputes come to an end sometime – a throwaway line that showed a lack of empathy for the worker’s struggle.

Cindy, an Education Assistant and workplace delegate of the United Workers Union spoke of the struggle to survive on stagnant wage levels while inflationary pressures continued to bear heavily upon her household budget. Cindy poignantly reminded the rally that part of the reason this government has a surplus is through the cuts to the wages of the public sector workers.

The next speaker was Mick Kelly, President of the Police Union of WA who said his members were overworked and underpaid, Inflation currently at 7.4 per cent, had eroded their salaries causing record levels of resignation and low levels of morale among remaining officers. Kelly called on the government to make a better offer and not to dictate but negotiate.

Two members from the United Firefighters Unions spoke not only of the extreme conditions under which they worked and unfair pay, but of a lack of maintenance and replacement of some of their aging infrastructure, including the fire stations and the fire trucks.

Melissa Watson, a Child Protection Worker with the Department of Communities, and workplace delegate with the Community and Public Sector Union/Civil Service Association, said she worked in conditions many people would find unimaginable to ensure the protection and care of children. At a time of austerity, continued Watson, “we took a wage cut but now we are in surplus and it was time to restore wage justice.” Watson continued, “We are tired of the overwork to make up for colleagues who have left […] and we are tired of accepting crumbs from the table.” In an echo of Karl Marx, it was time the workers also sat at the table and joined in an equal distribution of wealth.

Terry Joyce of the Rail Bus and Tram Union said his union has a determination to fight for a better wages’ outcome. Of the cost of living Joyce said, “We do not fill our shopping baskets the way we used to. Our food bill is going up because farmers costs are also increasing.” Joyce called on WA Premier Mark McGowan to recognise the work of a membership – his members which are haemorrhaging. Of the thinly disguised attempt to have absolute control of the State Budget by also being the State Treasurer, Joyce said, “If the Premier is also the Treasurer, then he only has to argue with himself.”

The last speaker was Carolyn Smith, Secretary of United Workers Union who said the rally was not the end but only the beginning, warning that she would be surprised if public sector workers do not resort to work bans and strikes as they escalate their fight for a five per cent wages increase.

The Premier responded to the rally that evening by saying, “I understand the issues. That’s why we’re providing a very generous offer to the public sector workforce … The public sector wage offer we are offering is in excess of what is being offered in other states.” This, however, sounded insincere as news was coming to hand the premier had attended an all-male Penfolds Grange wine-tasting evening hosted by the leading WA property developer the previous week. Guests included leading business magnates from the mining, casino and sport sectors who consumed bottles of wine costing $1000 each or the equivalent to the last annual increase in salary offered to public sector employees in the previous wages agreement.