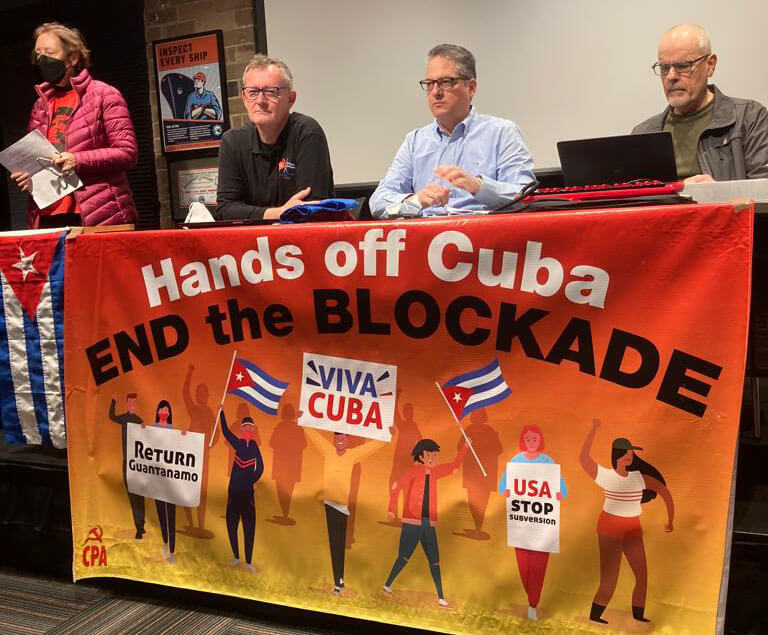 On 26th July 26 1959 an armed force led by Fidel Castro stormed the Moncada Barracks in Cuba, leading to the liberation of the Cuban people from the hideously repressive Battista regime and to the establishment of a socialist government in Cuba. 26th July is now known in Cuba as National Rebellion Day.

To celebrate that day, and in solidarity with the people of Cuba, members of the Communist Party of Australia held two events in Sydney on Sunday, 17th July. The first was the vigil they hold every month, which calls for the lifting of the United States blockade on Cuba. About twenty-nine members and supporters gathered outside Sydney Town Hall to voice their opposition to the blockade. The main message of the banners, “Hands off Cuba, end the blockade,” drew the attention of many passers-by.

The second event began at the offices of the Maritime Union of Australia, where about fifty people met to celebrate Cuba’s National Day. Proceedings commenced with an acknowledgement to country. Those in attendance greatly appreciated a musical version sung beautifully by the Sydney Trade Union Choir. Maria Hilario from the Australia-Cuba Friendship Society helped organise the event and introduced the main speakers.

It was a great honour to have the Cuban Ambassador to Australia, Ariel Lorenzo Rodriguez attend this special event. He gave a first-hand account of what is currently happening in Cuba and his insights were revealing and greatly appreciated.

In May this year the US Biden administration introduced a number of measures that seemed positive with regard to relations between Cuba and the US, including the granting of visas and the opening of more travel areas in Cuba.

These initiatives were welcomed by the Cuban Government and people. However, they didn’t go far enough, and little has changed as a result of them. US citizens are still barred from travelling to Cuba. The US has nominated Cuba as a “sponsor of terrorism,” a shocking national slander. The blockade has negatively impacted and inhibited the country from conducting international banking and financial transactions.

According to the ambassador, the unjust, severe blockade has been in place for sixty years now. The US intended it to result in hunger, desperation, and economic hardship, and believed that these developments would trigger a collapse in support of the Cuban socialist government and lead to its overthrow. But this has not been the case. There is widespread opposition to the blockade within Cuba and in other countries as well. Virtually all the members of the UN General Assembly and the Association of Latin American Countries have condemned the blockade.

The ambassador also spoke about the July 2021 demonstrations within Cuba against the government. The demonstrations made news in countries around the world, including Australia. The mainstream media, notorious for fake news, made the situation appear worse than it was. Despite the negative publicity and attempts to demonise the Cuban government, the people of Cuba came out onto the streets to demonstrate their support for the government and socialism, and the anti-government protests were defeated.

Nevertheless, things are extremely difficult in Cuba at present. There are many shortages of commodities, and people have to queue for subsidised goods. The six-decade economic blockade has exaggerated all the problems a developing nation like Cuba faces. Moreover, Venezuela, Cuba’s main trading partner, has been in a severe recession for several years, and the COVID-19 epidemic has had a drastic effect on the tourism industry. There are signs that tourism is beginning to revive, and the Cuban government is giving special attention to the industry, to boost its recovery. The Cuban people themselves have shown great courage and resilience in dealing with these very difficult circumstances.

Tim Anderson spoke about his recent trip to Cuba. He went there with a group of activists from Palestine, Syria, and Lebanon who are opposing imperialism and Zionism. During the trip the group built cross-continental links with a number of artistic and intellectual groups in Cuba.

Tim’s group also went to scientific and medical facilities and were informed about some of the vaccines and medicines developed by researchers and doctors. Cuba now has treatment for non-melanoma skin cancer and auto-immune diseases (including rheumatoid arthritis), and has also developed vaccines for hepatitis B and lung cancer, as well as five vaccines for Covid 19, including Abdalla, which is now being used as a booster in China. Cuba has also developed treatment to avoid amputations as a result of diabetes. In the US Congress twenty-six Democrat politicians are currently lobbying President Joe Biden for greater cooperation with Cuba on vaccine technology.

The final speaker was Warren Smith, Deputy Secretary of the Maritime Union of Australia. He spoke about Cuban socialism and how it has inspired people around the world, including union members. He praised Cuba for its ideals that benefit humanity by sending doctors and assistance to the people of the world, He said that Cuba promotes the idea that people can live in peace and solidarity with mutual cooperation with one another. The union has condemned the criminal blockade in Cuba.

The Cuban ambassador, comrade Ariel, was invited to the 150th anniversary of the Maritime Union in October. Warren said he hopes more people will learn about the special solidarity that exists in Cuba. And that the union will always stand side by side with the people of Cuba.

The organisers of the Sydney celebration offer their thanks to everyone who participated in the celebration, which was a great success.