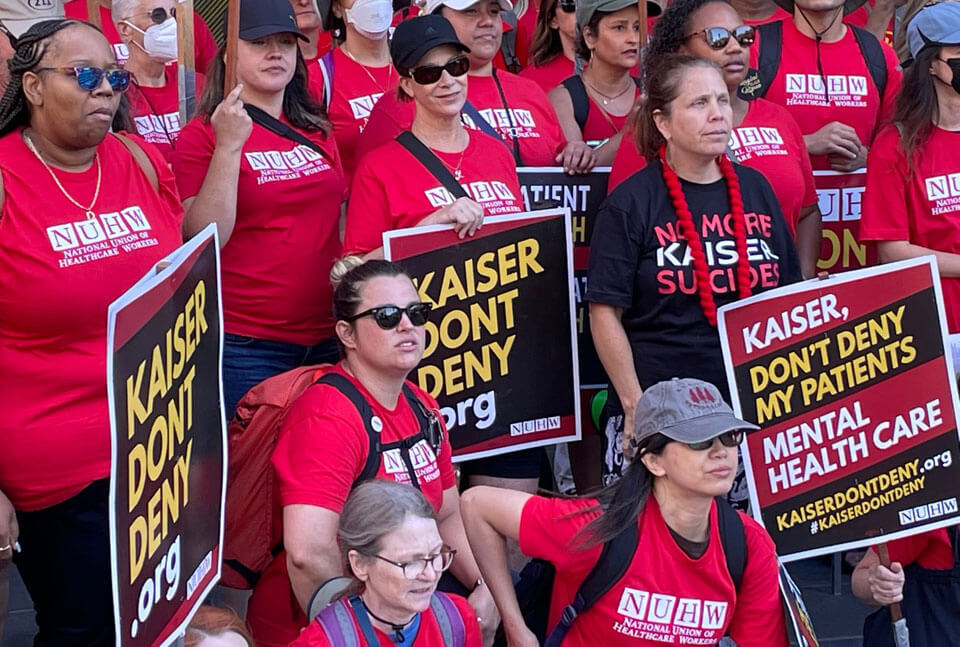 Over 2,000 striking mental health clinicians hit the picket lines in front of Kaiser Permanente facilities in northern California and the Central Valley on the morning of 29th August, as they began the third week of a strike demanding the giant Health Maintenance Organisation (HMO) staff up in order to provide timely mental health care to its millions of enrolled patients.

And on that day, the psychologists, licensed clinical social workers, addiction medicine counsellors, and marriage and family counsellors, members of the National Union of Healthcare Workers (NUHW), were joined by dozens of colleagues in Hawaii who face even greater understaffing issues.

When asked about Kaiser’s claims of an across-the-board shortage of mental health therapists, Marcucci-Morris responded that the real shortage is “clinicians who are willing to work for Kaiser. I have many colleagues and friends that I’ve worked with through grad school, community mental health, just plain friendships, who need and want work, but when I suggest Kaiser, they laugh at me: ‘No way! I’m not going to dig my own grave!’

Along the picket line, another clinician remarked on the long history of the struggle for a truly productive work environment. “We’ve been out on strike many times over the years,” she said. “Really, what we face daily is not being able to provide adequate care. We’ve been trained to do particular treatments to help people heal, and ultimately, we haven’t been able to see our patients with the consistency that’s necessary so they can receive those treatments as they were designed.”

A longtime but soon-to-be former Kaiser patient marching with the picketing clinicians described a lifelong struggle with severe illness requiring extensive medication. She spoke of having to pay out-of-pocket for the one treatment which provided major relief after she had received mixed and inaccurate messaging from Kaiser about its availability.

“I really appreciate everything the therapists and intake people are doing,” she said, “and I’m deeply moved by them not getting their salaries during this time because they believe in patient care. Now, I have other insurance that will support my care a little bit better.”

A psychologist told how she joined Kaiser’s mental health clinician staff some 22 years ago, after years as a university professor, because “the ethos of the corporation and the department I worked in was about being the best place to get care, really trying to improve mental health and health in general. We were the vanguard at Kaiser, doing things on a big, systemic level.”

But later, she said, “when we shifted to making millions and then billions, I think the whole structure changed, and instead of wanting to be the best, we wanted to make the most money. I don’t think the whole point was to give bad care, but definitely whatever was going to garner us funds.”

Now, she said, “People are dictating from a business point of view rather than an experience point of view. And I don’t think they’ve given adequate respect to the people on the line.”

Under California state laws, Kaiser is required to provide timely mental health care to its members even during a strike, a responsibility underscored before the clinicians’ current action by Mary Watanabe, director of the Department of Managed Health Care, which oversees health care providers in the state.

On 24th August, the DMHC announced that it had launched a targeted enforcement action against Kaiser, based on patient complaints that the HMO is violating those requirements during the strike’s first weeks.

NUHW President Sal Rosselli said union members were pleased the state authorities were “taking a close look” at Kaiser’s illegal denial of care and called for “rapid intervention” to enforce the laws.

“The suffering and neglect that Kaiser patients have endured over the past two weeks is unnecessary, illegal, and yet it can be easily remedied,” Rosselli said in a statement. “Kaiser’s executives need to obey the law, serve the patients and end the strike by agreeing to work with us to properly operate and staff its clinics. It’s time for Kaiser to respect the importance of mental health care and fundamentally change its approach to how it treats both patients and clinicians.”

The next day, the state legislature passed Senate Bill 858, by state Senator Scott Wiener, D-San Francisco, and sponsored by the statewide health care consumer advocacy coalition Health Access. If signed by Governor Gavin Newsom, SB 858 will ratchet up the fines health providers must pay for violating mental health parity laws from the present $2,500 to $25,000 per incident.