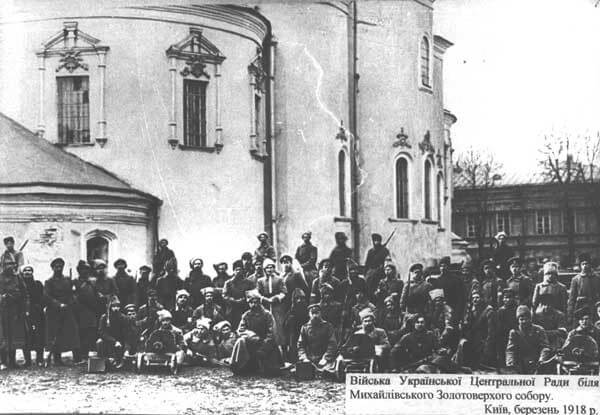 Soldiers of the Ukrainian People’s Army in front of Saint Michael’s Golden-Domed Monastery in Kyiv.

This is the third part of an edited translation from the third edition of the Great Soviet Encyclopaedia on the Ukrainian Soviet Socialist Republic, which was a founding republic of the USSR in 1922. By the end of the 1930s, the Ukrainian SSR had become an economic powerhouse in the Soviet Union, as well as major source of agricultural produce. Rich in minerals, it was the home – especially in the eastern Donbass region – of major industries and energy production. It was this region that Hitler targeted with “Operation Barbarossa,” since Germany has always lacked the necessary resources for its industry. The relevant section from the encyclopaedia is as follows:

From the first days of the war, the territory of the Ukraine became the scene of stubborn battles with the Nazi invaders. Factories and enterprises, scientific institutions and universities, equipment and property of the collective farms and state farms were transferred to the east, away from the areas threatened by the invasion of the enemy. From July to October 1941, over 550 large enterprises and 3.5 million people were evacuated from the Ukraine. Underground Party and partisan detachments were created. Fierce fighting broke out in July 1941 near Kiev and in early August near Odessa. The heroic defence of Kiev and Odessa helped the Soviet Army to thwart the enemy’s plan of a lightning offensive on Moscow, Crimea, and the Caucasus. The Sevastopol defence of 1941-42 was of great importance in the fight against the enemy. As a result of the summer offensive of 1942, the German Fascist troops finally managed to occupy the entire territory of the Ukraine.

Having captured the Ukraine, the Nazis dismembered the republic. Between the Bug and the Dnieper Rivers, the Romanian-governed “Transnistria” was created. Part of the western regions known as “Galicia” was transferred to occupying authorities in Poland. The rest of the territory, with the exception of the front-line areas (Donbass and some others), was put under the rule of a “Reichskommissariat.” A terrorist regime was established everywhere. During the occupation, the fascists destroyed about 5 million people in Ukraine, and over 2 million people were taken to work in Europe. Ukrainian bourgeois nationalists, who created armed fascist gangs, took part in these atrocities.

Neither mass killings nor terror could break the will of the Ukrainian people to fight. In the summer of 1941, a partisan movement began in the Ukraine. In the Sumy region, the detachments of Kovpak, Rudnev, and Saburov were in operation; in the Chernihiv region, there were resistance forces led by Popudrenko and Fedorov. In the summer of 1942, the Ukrainian headquarters of the resistance movement was created. In the conditions of fascist terror, numerous underground organisations fought against the occupiers, with over 500,000 in the resistance movement overall, and over 100 thousand in the underground movement.

With the defeat of the German Fascist troops at Stalingrad, the liberation of Ukraine began. By the autumn of 1943 and after the defeat of the enemy at the Kursk Salient, almost the entire territory to the east of the Dnieper was liberated. By the 6th November, 1943, Kiev was liberated, and by the October 1944 the entire territory of the Ukraine was liberated after fierce struggle. One of the results of the Red Army’s offensive was the expulsion of fascist invaders from Transcarpathia in October 1944. The workers of this region at last had the opportunity to resolve issues concerning their social, national, and state development. In late November 1944, the First Soviet People’s Deputies met in the city of Mukachevo. During the war it was an underground movement, but now it could come into the open and the meeting adopted a manifesto on reunification with the Soviet Union.

The Ukrainian people made a worthy contribution to the joint struggle of the peoples of the USSR against the Nazi invaders and Japanese militarists: 4.5 million Ukrainian soldiers fought on all fronts of the Great Patriotic War, and about 2.5 million of them were awarded orders and medals. More than 2,000 soldiers were awarded the title of Hero of the Soviet Union. Over 57,000 Ukrainian partisans and underground workers were awarded orders and medals, and 97 of them became Heroes of the Soviet Union. The cities of Kiev, Odessa, Sevastopol, and Kerch were designated “hero cities.”

The German-Fascist invaders caused enormous damage to the Ukraine: they destroyed and burned 714 cities and towns, and over 28,000 villages, depriving about 10 million people of housing; they destroyed and looted more than 16,000 industrial enterprises, over 200,000 industrial buildings, 27,910 collective farms, 872 state farms, 32,930 schools, technical schools, and universities. Direct material losses amounted to 285 billion rubles (in pre-war value). Already during the war, the workers of the Ukraine, relying on the fraternal help of all the peoples of the USSR, began to restore the economy of their republic, and at the same time began to provide assistance to other Soviet republics that suffered from the Nazi occupation.

After the victorious end of the war, the workers of the Ukraine were actively involved in the implementation of the tasks of the Fourth Five-Year Plan (1946-1950). The five-year plan for the restoration of the national economy that had been destroyed during the war was completed ahead of schedule. Gross industrial output in 1950 exceeded the level of 1940 by 15 per cent. By this time, the volume of coal mining and metal smelting returned to pre-war levels. The oil and gas industry saw intensive development (in 1946-1948 the Dashava-Kiev gas pipeline was built). However, there were great difficulties in the restoration and development of agriculture, and its pace of development lagged behind industry. By 1950, grain production had not yet returned to the level of 1940, and required further consolidation of the collective farms. In the western regions, they had to contend with well-established and armed bourgeois-nationalist gangs supported by Western powers.

Having restored the national economy, the Ukraine along with other Soviet republics continued to struggle for the completion of the construction of socialism. By the time of the 40th anniversary of the Great October Revolution, there was much to celebrate. By 1957, the gross industrial output of Ukraine exceeded the level of 1913 by twenty times. The Ukraine produced four to five times more cast iron, steel, rolled products, and coal than the whole of pre-revolutionary Russia. In 1951-1958, over 1,000 large industrial enterprises were constructed. By the end of the 1950s, agricultural production was able to overcome its earlier difficulties. Compared with 1953, the gross grain harvest per unit in 1958 had increased by twenty-eight per cent. The development of industry and agriculture led to an increase in the well-being of the working people.

In the Five-Year Plans that followed, the Ukrainian SSR did not slacken the pace of economic and social development. Hundreds of new industrial facilities were constructed, and the Ukraine developed as one of the most important fuel, energy, metallurgical, and machine-building bases of the USSR, along with a large fertiliser and diversified food industry. Each of the Five-Year Plans saw significant increases in industrial production, electricity production, iron smelting, and steel. Agriculture also improved considerably. For example, during the Ninth Five-Year Plan (1971-1975), the output of all industrial products increased by 41 per cent compared to the previous five-year period, electricity production was up by 41.4 per cent, iron smelting by 12 percent, steel by 13.9 per cent, and agriculture by 15.5 per cent. The main production funds of the national economy of the Ukraine increased by 150 per cent.

Socialism radically changed the face of the Ukraine. It became one of the largest industrial and agrarian republics of the USSR. In the conditions of a developed socialist society, the working people of Ukraine, together with the peoples of the entire Soviet Union, sought to create the material and technical foundations of communism.