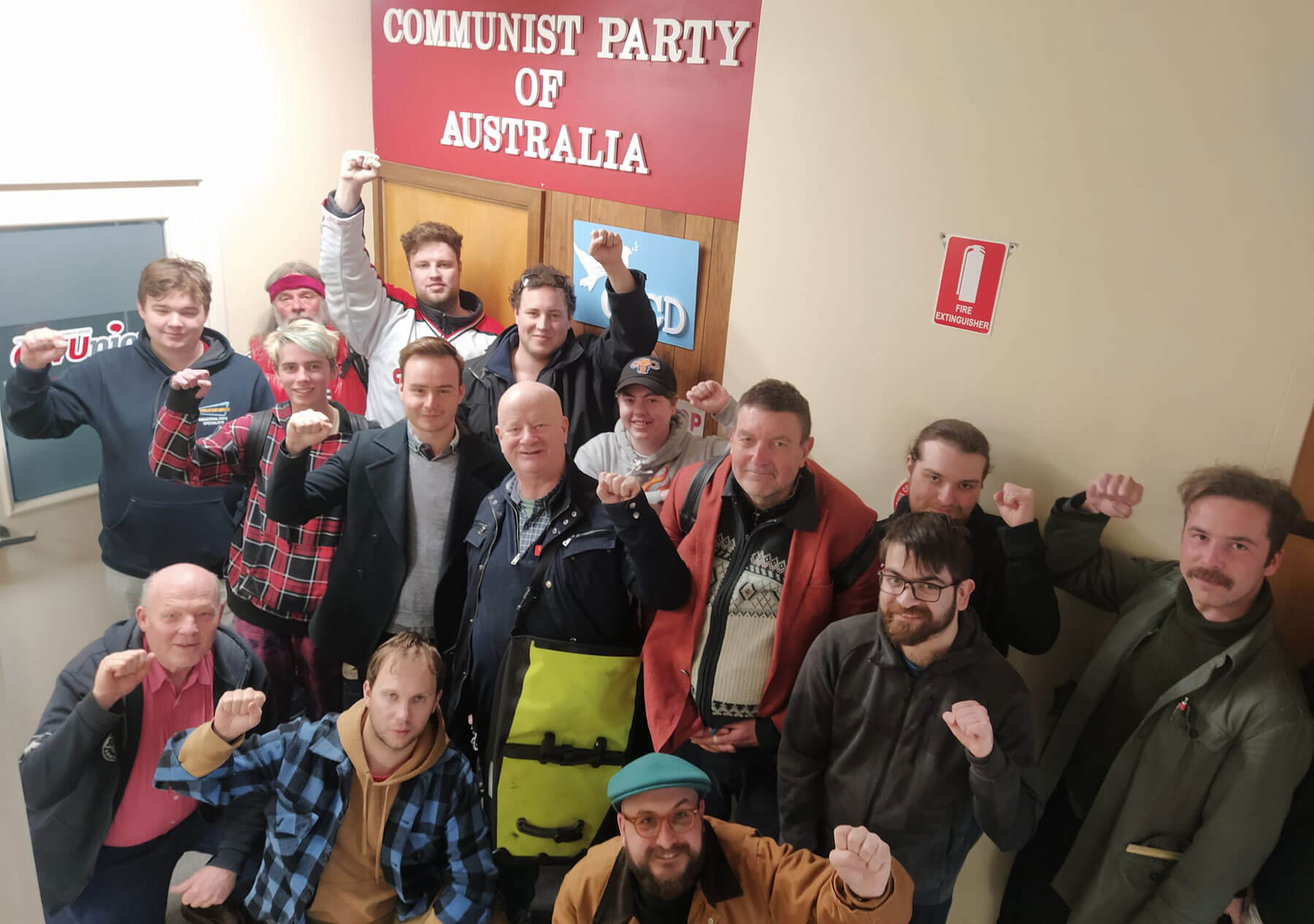 Who started smoking cigars earlier, Arnold Schwarzenegger or Fidel Castro? Which scientific discovery was announced in The Daily Worker (a British communist paper) before anyone else could read about it in Nature? Answers to these and a range of other mostly communism-related questions were what gained one lucky team of competitors an array of prizes such as wine, Cuban coffee, and a CPA showbag full of goodies at the CPA Melbourne Branch Trivia Night on Friday 7th September.

A happy crowd of CPA members, friends, and relatives with team names like “The L A Lenins” and “Bolshevik Brainiacs” bickered about the questions, as well as straining ears and brains to guess the answers to “Working class hits” and “Name that communist” questions from the TV and sound system in the loading bay hall in Melbourne’s Trades Hall. Hosted by comrades Bri and Floyd, and put together by hard-working Melbourne Branch members, the event raised almost a thousand dollars for the Melbourne Branch’s work, as well as serving as an opener for the National School on Saturday and Sunday, with comrades Christian and David – who organised the school – getting a warm welcome.

The trivia night was very special to the Melbourne Branch; since their previous trivia night had been an online affair in the depths of pandemic lockdown. That was successful as well, but it was great to see members, friends, and supporters having fun and raising funds for the party in 3D. 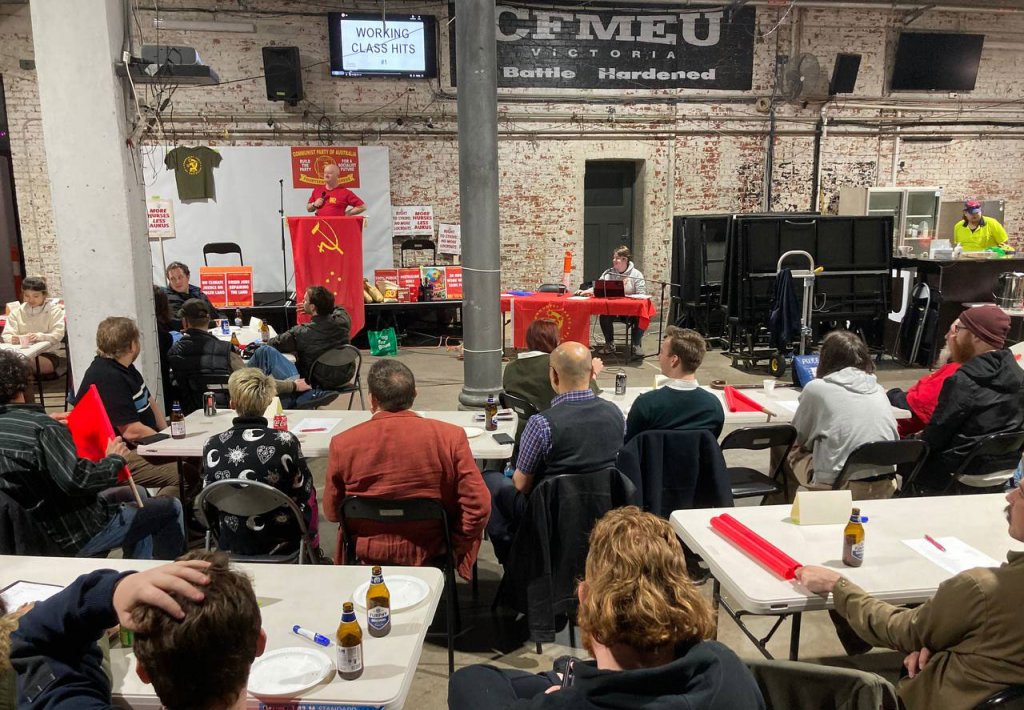 As well as being useful education for party work, the sessions were entertainingly presented, with learners asking frequent questions, breaking for discussions, and at one stage drawing rapidly improvised posters to develop their understanding of Lenin’s Theses on the National Question (we can only wonder what Lenin would have thought of the Ned Kelly cartoon, which really should be a prize at the next trivia night!).

On both days, morning sessions were run by younger members, with comrade Valentin taking us through Foundations of Leninism, and comrade Bri expounding on the National Question. Lunch breaks combined comradely chat with some bravely exploring that food van near Trades Hall that sells camel burgers. On Saturday night comrades continued the conversation at The Clyde hotel as well as at the “No Bar For Nazis” event on Saturday Night. Everything wound up on Sunday afternoon with some comrades racing for planes back to Sydney, some heading back to the Clyde, and others going home to just lie down and absorb all the information!

(In case you’re wondering, Castro started smoking at 15, while Arnold didn’t take up the habit until he was thirty, and thanks to communist scientist JSB Haldane, British communists heard about the discovery of the coelacanth, also known as the “living fossil fish” two days before other scientists did.) 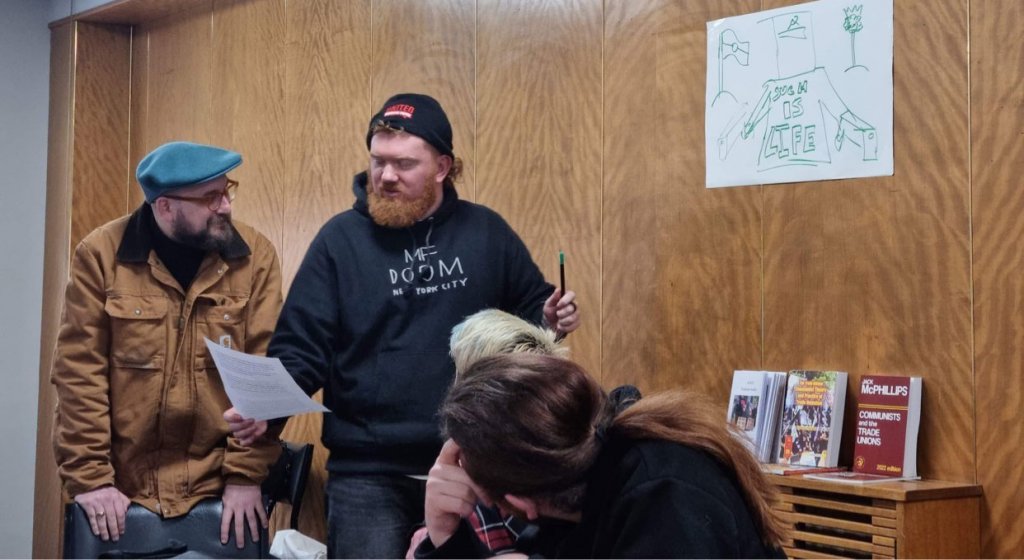