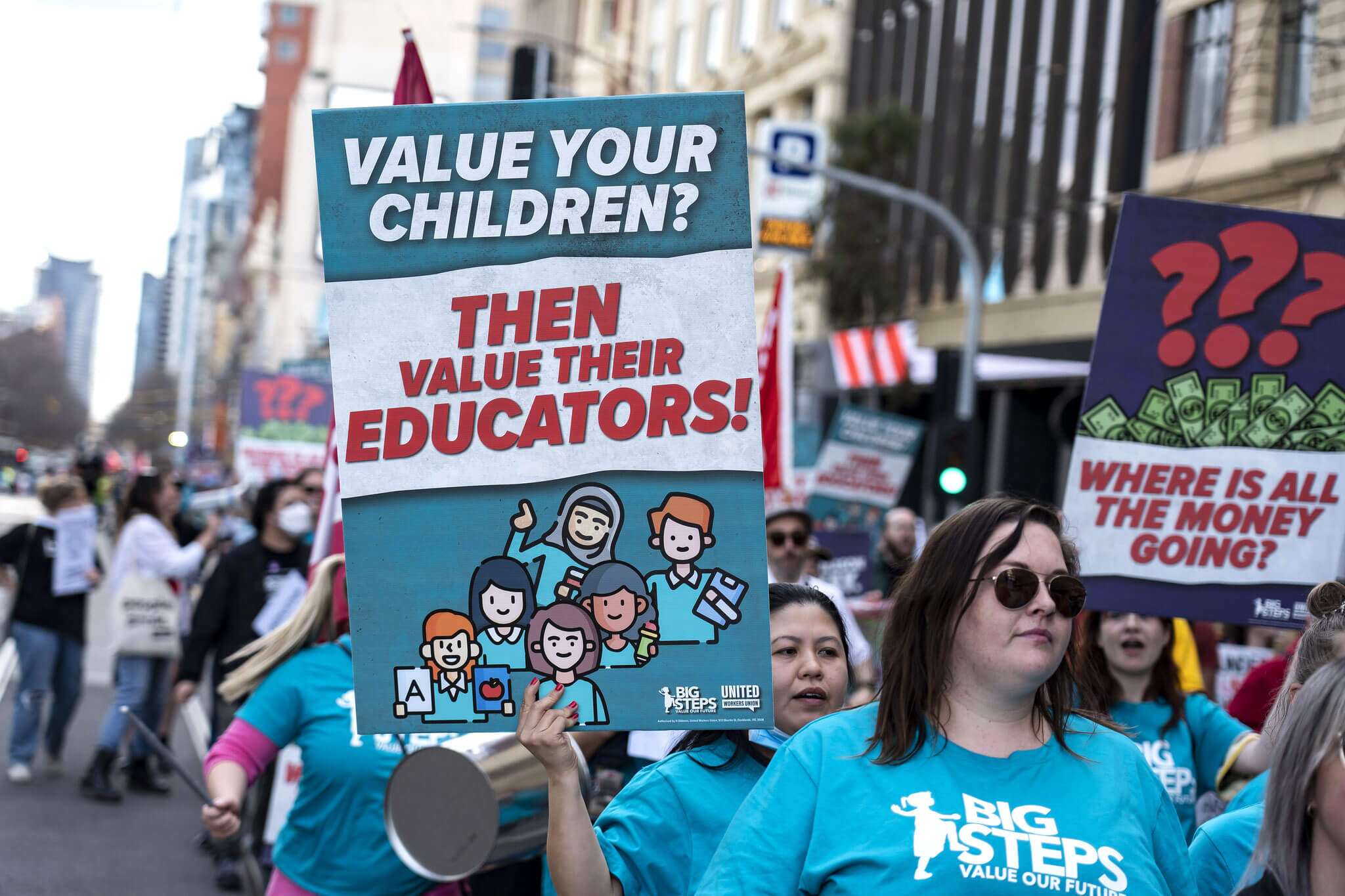 Tens of thousands of early childhood educators walked off the job across the country to take part in rallies and marches on 7th September. More than 1,000 centres shut down. They were joined by many parents and other supporters. United Workers Union (UWU) early education director Helen Gibbons said the shutdown was “the largest action of early educators” that Australia has seen.

Their placards sent a strong message to government: “Value your children?: then value their educators!”; “I can’t pay my bills”; “Give us a reason to stay: it’ time for better pay”; “No more band-aids! We demand a living wage!”

Childcare centre director Jessica Grissell, speaking at the rally in Brisbane said, “If we’re not here, the workforce is halved – because one parent has to stay home with their children.”

“Ninety per cent of a person’s brain development happens in that first five years – I don’t understand how that is not important enough to be classed in the education sector.”

The early childhood education and care (ECEC) system is in crisis.

UWU members are demanding the federal government urgently outline a plan and timeline to deliver on three key priorities:

Educators are leaving in record numbers due to burn out, excessive workloads, and low pay. Centres have had to limit enrolments, cancel staff leave, and close rooms. There are thousands of staff vacancies and centres are turning away children because they do not have enough staff.

Gibbons said that ninety-eight per cent of staff say that staffing shortages are impacting the quality of care and education children receive. Ninety-nine per cent say that workload and staffing issues are making educators feel burnt out and undervalued.

The sector’s workforce is also highly feminised as well as low-paid, similar to the situation in the disability and aged care sectors.

Many ECEC educators are paid the award rate of $24.70 per hour which is totally unacceptable for educators who are playing such an important role. Those who are qualified with a TAFE diploma and look after a group, the award rate is $27.89 and if not looking after a group, it is $26.66 an hour. For those with a four-year degree it is just over $32.

“In just the past few weeks it’s been revealed that there is huge inequality of access to early education depending on where you live, as private providers over-saturate lucrative metropolitan areas and abandon regional families,” said Gibbons. “We’ve seen children are going hungry because of cost-cutting to their food budgets, while private for-profit providers pocket millions in parents’ fees and federal funding.”

Gibbons also called for society to place a higher value on early childhood education. “I feel like people are just considering us as babysitters. We deal with children from zero to five years old, which are the very important stages in a child’s development and learning.”

This is when the foundations are being laid for social, language, physical, intellectual, emotional, and behavioural development.

ECEC not only prepares children for school but can also identify developmental delays which can be addressed early.

“UWU members’ vision is for a sector where educators’ vital work is valued with professional wages and working conditions, and where early education is recognised for its vital role in children’s development,” Gibbons said.

The federal government has the economic and regulatory power to ensure job quality, payment of workers in line with the high qualifications the job demands, and the responsible nature of their work. It should exercise those powers.

ECEC is increasingly becoming privatised to the point where fifty per cent of centres are now private, and for-profit. Thirty-nine per cent are not-for-profit and only eleven per cent public.

The federal government has the economic and regulatory power to ensure job quality, payment of workers in line with their qualifications and the responsible and important nature of their work. It should exercise those powers.

Analysing the data from the Australian Children’s Education and Care Quality Authority (2021), it is evident that there are problems with quality in the private, for-profit sector.

The private for-profit sector accounted for almost ninety per cent of enforcement action for non-compliance with minimum standards under the law, despite making up fifty per cent of all centres. Quality has been sacrificed at the alter of private profit and the exploitation of educators.

The market has failed the children, their families, and the educators.

“All forms of ECEC are subsidised through public financial support delivered to both parents and to ECEC providers. But private provision of ECEC has different economic impacts than public or NFP provision. This is because private, for-profit ECEC must include a margin for financial return to the owners of the firm delivering the service,” Matt Grudnoff says in a report for the Centre For Future Work. “This profit diverts resources away from direct service provision; it also distorts incentives for ECEC providers, encouraging them to sacrifice quality and cut corners in order to maximise financial returns for the owners.

“The focus of private ECEC companies on cutting costs and maximising profit, results in more poorly-paid, insecure jobs for ECEC workers – with resulting consequences for the quality of education and care they can provide,” the report says.

The report, The Economic Benefits of High Quality Universal Early Child Education, compared ECEC funding levels in Australia and other OECD countries. It found that ECEC spending is lower in Australia than other countries (and much lower than the Nordic countries) – yet private revenues (mostly paid by parents) are higher than in other countries.

“In short, Australian parents pay more, but get less.”

These findings are consistent with a 2021 UNICEF report comparing the forty-one wealthiest countries in the world, which showed that Australia ranked 34 out of 41 countries on access; and thirty-four out of forty on affordability.

“Australia’s reliance on private for-profit providers not only undermines the quality of services received by children and parents; it also diminishes the macroeconomic and fiscal benefits of the whole system.”

The report also finds that if Australian women had the same participation rates and opportunity to work full-time as Nordic women, Australia’s GDP would be some $132 billion per year higher. By matching Nordic funding levels, with new funds channelled to public and not-for-profit centres (rather than private firms), GDP would grow by another $167 billion.

The economic benefits would more than outweigh the costs. In addition, thousands of women would be able to enter the workforce or increase their hours of work. Rather than focusing on migration to meet labour shortages, the government could be addressing the gender gap in the employment market through proper funding of public provision of ECEC.

However, expanded ECEC must be done in a manner to maximise these potential economic and social benefits. That means directing new resources into not-for-profit and public centres which put top priority on quality – rather than subsidising profits of private investors in an ECEC system which views children as an vehicle for profit.

Pouring more money into private providers would be a waste of money. There is an urgent need for adequate funding, staffing, and for a transition to public ECEC centres. The construction of centres in lower socio-economic and regional areas is paramount. It would not only provide ECEC for children where the need is greatest, it would generate thousands of jobs in construction and ECEC.

Attracting and training more qualified educators will only be possible when pay equity, job security and good working conditions are provided. ECEC educators care and love their work.

The whole of society would benefit from free, universal access, publicly-delivered, high-quality care and qualified staff.

It’s time to value early learning as part of the education system, just as important as schools, and to put children before profit.

As Gibbons said: “The only way out of the crisis in early learning is real reform that respects educators.”