On the 15th October the NSW state committee hosted a talk by National Union of Rail, Maritime and Transport Workers (RMT) President and leading member of the Communist Party of Britain (CPB) Alex Gordon.

The talk held at the CPA’s Sydney offices was well attended by CPA members and left-wing union activists and officials. Alex Gordon spoke about the struggles facing the British union movement, the working class, and what communists are doing to combat this.

Workers in Britain are facing a full-scale assault, firing and rehiring has become a common tactic by employers. The Tory government is attempting to restrict trade union rights further. However, workers are fighting back, unions are taking widespread strike action across industries. The board left is organising demonstrations and industrial action aiming to take down the Tory government. He also spoke of the tasks for communists in the trade unions. How we must build legitimacy in the trade union movement in the eyes of workers by showing ourselves to be a principled and real alternative to groups like the Labor party. Stressing the importance of building a board working class alliances where possible to combat right wing elements in the trade union movement. 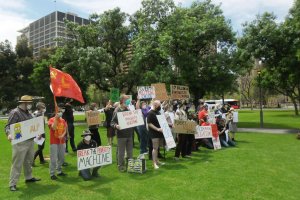