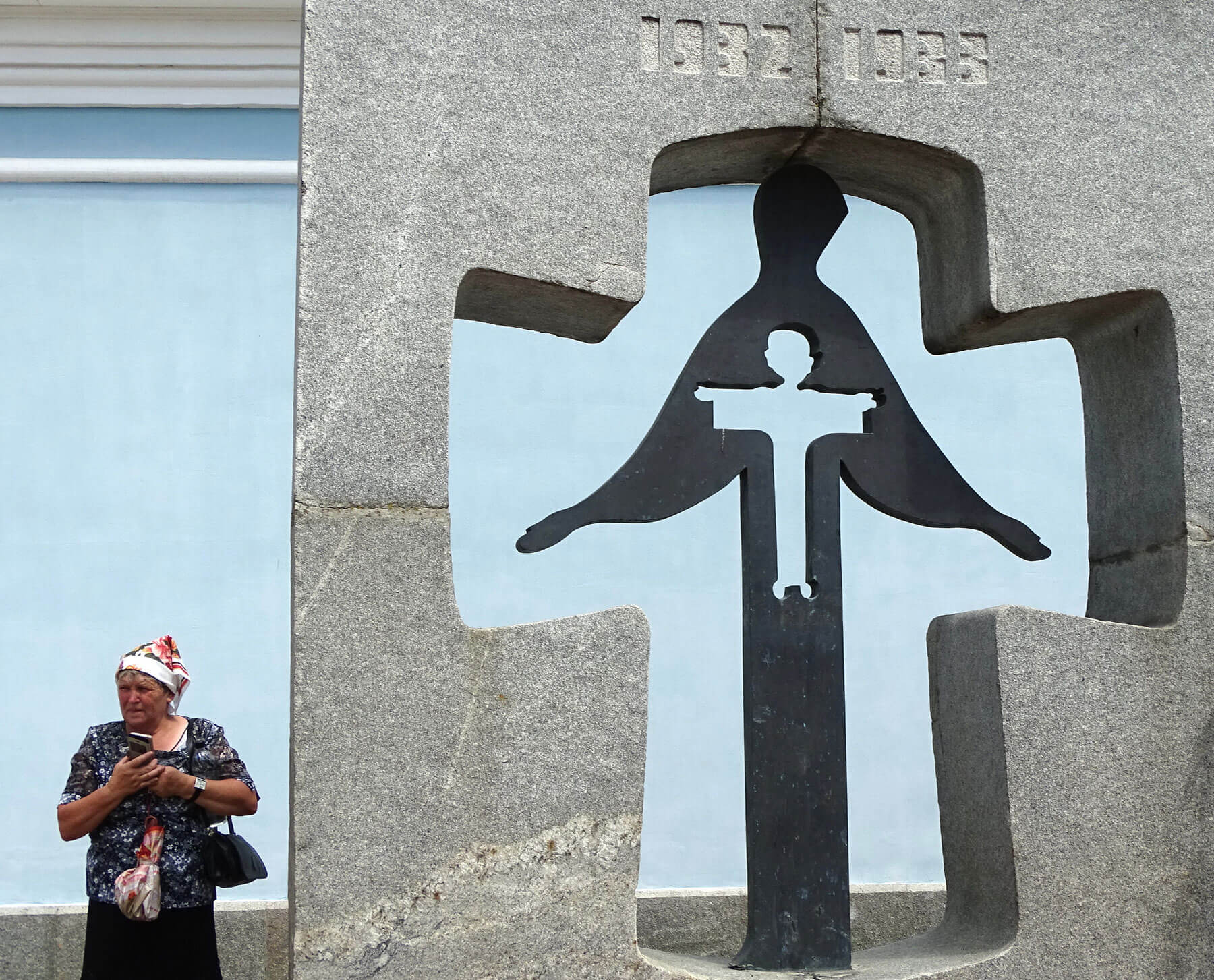 Prime Minister Anthony Albanese on the 12th October offered a package of military assistance to help Ukraine repel Russian troops from the east of the country. Albanese had earlier guaranteed military aid during his trip to Kyiv in July. Such support would be expected if there was a large Ukrainian population in Australia, but according to the 2011 Census, there are only 38,000 ethnic Ukrainians. What lies behind this “generosity” is Australia’s political support for the Holodomor as a deliberate famine. The federal senate on 30th October 2003 adopted Resolution No. 680: that seven million Ukrainians starved to death as a result of Stalinist policies in 1932-33. On 26th November 2012 the senate accepted that the famine was an act of genocide against Ukraine, a Holodomor.

In commemoration of the 80th anniversary of the Holodomor, in 2013, the Labor government of Prime Minister Kevin Rudd, issued a postage stamp on a first day cover with “Ukraine Famine – Act of Genocide” (See Figure 1). Ukrainian organisations have greatly influenced public and government opinion. On 26th February 2018, Chris Crewther, Member for Dunkley, and Chairman of the Australia-Ukraine Parliamentary Friendship Group (AUPFG), moved a motion in parliament to recognise the Holodomor, accusing Stalin of instigating a man-made famine in which more than 7 million people perished. 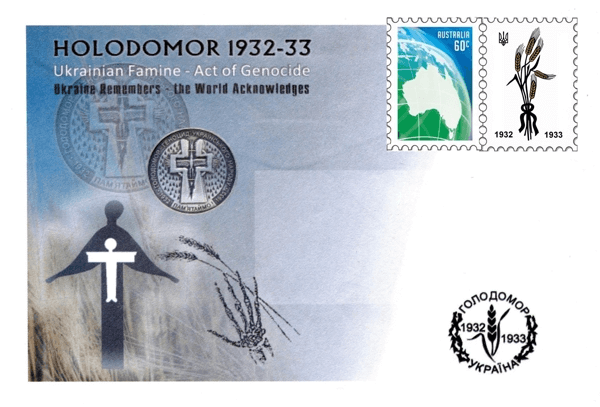 Figure 1: 2013 issue of the Australian postage stamp and first day cover commemorating the 80th anniversary of the Holodomor-As-Genocide. It shows coins, a monument and death.

The Holodomor-As-Genocide is important in understanding Ukrainian nationalism, as it has gained political significance during the current Russia-Ukraine conflict. An industry has grown up portraying the Holodomor as a deliberate act, in monuments, museum, guidebooks, art, novels, testimonies, photo books, movies, postage stamps, and even an opera, by Virko Baley, “Holodomor. Red Earth. Hunger.” Websites, such as the Ukrainian Institute of National Memory, rely on photographs taken in 1933 by the Austrian engineer, Alexander Wienerberger, when he was setting up a chemical factory in Kharkiv, then the capital of Ukraine. These photos show a few destitute people suffering from malnutrition. They do not show forced mass starvation killing millions.

Scores of books have put forward conclusions that are fuelled by a strong anti-Communist bias, such as Robert Conquest’s The Harvest of Sorrow (1986), Timothy Snyder’s Bloodlands: Europe Between Hitler and Stalin (2010), Stephen Kotkin’s Stalin: Waiting for Hitler (2017) and Anne Applebaum’s Red Famine: Stalin’s War on Ukraine (2017). Kotkin concludes that Joseph Stalin did not deliberately cause the famine. Applebaum, whose research was supported by the Harvard Ukrainian Research Institute, argues that the Bolsheviks wanted to extract Ukraine’s wealth, control labour, confiscate the last grains from hungry peasants and then blocked the peasants from fleeing famine-afflicted areas to search for food. The Bolsheviks wiped out the intelligentsia and political elite to eradicate Ukrainian nationalism. She also admits that there is no evidence that Stalin ordered the famine.

In December 1987 the USSR first recognised the famine in Ukraine as a great tragedy. The following year the term “Holodomor” was introduced by Musiyenko, but only used in Ukraine until after its independence in 1991. Holodomor literally means “death by hunger,” but has been translated, by those blaming the USSR, as “extermination by hunger.”

On 10th November 2003 twenty-five countries of the United Nations, including Russia and Ukraine, signed a joint statement: “The Great Famine of 1932–1933 in Ukraine (Holodomor), took from 7 million to 10 million innocent lives and became a national tragedy for the Ukrainian people.” Sixteen countries considered the Holodomor a genocide, six consider it a criminal act, and five international organisations, including UNESCO, consider it a crime against humanity. On 23rd October 2008, the European Parliament, recognising the Holodomor as an artificial famine, strongly condemned it as an act of mass annihilation and as a violation of human rights and freedoms. The lower house of the parliament of Russia condemned the Soviet regime’s neglect for “the lives of people for the achievement of economic and political goals.” On 26th April 2021 the US Senate passed the Ukraine Security Partnership Act of 2021. “Between 1919 and 1991, Ukraine was brutally ruled by the Soviet Union, whose policy of agricultural collectivisation caused the Holodomor of 1932–1933, a man-made famine that resulted in the death of at least 3,000,000 Ukrainians by starvation.” The US government had passed into law that the Holodomor was a political act.

On 13th January 2010, the Kyiv Court of Appeal, in the Criminal Proceedings over Genocide in Ukraine 1932-1933, accused the heads of the OGPU and GPU of the Ukrainian SSR and the prosecutor’s offices and the justice bodies in all oblasts of Ukraine of genocide, of creating an artificial famine, in which nearly 4 million people were killed. At the top of the list were Joseph Stalin (Secretary of the Central Committee of Soviet Communist Party), Viacheslav Molotov, Lazar Kaganovich, Pavel Postyshev, Stanislav Kosior, Vlas Chubar and Mendel Khatayevych. The proceedings were terminated as the accused were all dead and could not defend themselves. In November 2021 a national poll showed that 85 per cent of Ukrainians believed that the Holodomor was a genocide. Its acceptance was complete, despite the lack of evidence.

How reliable is the evidence for a deliberate famine and not a natural event, as famines had been periodic under Czarist Russia, occurring every 10 to 15 years? Many US academics blame the Holodomor on Stalin, but they fail to take into account the large body of evidence that contradicts their arguments. Anna Louise Strong, an American journalist, who had been in the Soviet Union at the time, wrote on the conditions in Ukraine in Searching Out the Soviets (1935):

“I visited several places in those regions during that period. There was a serious grain shortage in the 1932 harvest due chiefly to inefficiencies of the organisational period of the new large-scale mechanised farming among peasants unaccustomed to machines. To this was added sabotage by dispossessed kulaks, the leaving of the farms by 11 million workers who went to new industries, the cumulative effect of the world crisis in depressing the value of Soviet farm exports, and a drought in five basic grain regions in 1931. The harvest of 1932 was better than that of 1931 but was not all gathered; on account of overoptimistic promises from rural districts, Moscow discovered the actual situation only in December when a considerable amount of grain was under snow.”

She later wrote that the harvest of 1933 “surpassed that of 1930, which till then had held the record. This time, the new record was made not by a burst of half-organised enthusiasm, but by growing efficiency and permanent organisation […]. This nationwide cooperation beat the 1934 drought, securing a total crop for the USSR equal to the all-time high of 1933.” The famine was accentuated by poor administration, communication problems – Kyiv is 900km from Moscow by road — and that significant grain was lost during transportation and storage. Russia reduced its export of grain and instead transported food and seed to Ukraine. It was the largest allocation of seed and food aid in Soviet history, 5.76 million tons. On 7th January 1934 at the Seventeenth Party Congress, Pavel Postyshev acknowledged that “gross errors and blunders” had worsened the famine.

An examination of documents, memorandum and reports concludes that the famine was natural and not a planned genocide by Stalin. Tauger writes in his review of R W Davies and Stephen G Wheatcroft, The Years of Hunger (2004): “[T]he USSR experienced an unusual environmental disaster in 1932: extremely wet and humid weather that gave rise to severe plant disease infestations, especially rust. Ukraine had double or triple the normal rainfall in 1932 […] rust and other fungal diseases reduced the potential harvest in 1932 by almost nine million tons.” The fungal rust explains the low yields affecting seventy per cent of the harvest in some regions. Wheatcroft’s study of 2012, found that the famine was due to weather conditions and not Soviet policy.

The “economic crisis” in the first half of 1933 made the import of food impossible. On 8th February 1933, Stalin authorised grain allocations to the Ukrainian provinces of Odessa and Dnepropetrovsk. “Transfer 200 thousand poods of rye … to be used for the purposes of food assistance to workers […] regardless of membership in the Communist Party, of kolkhozes that are experiencing food shortages.”

Soviet policy had been to collectivise the small farms so that they could have tractors, paid for by the grain collected. Unfortunately, grain collection was done by overzealous officials. Stalin tried to correct this and wrote in Pravda on 2nd March 1930. These officials had lost “all sense of proportion and the capacity to understand realities” by trying to achieve results too quickly. Such behaviour was “dangerous and harmful to our cause.” He reminded them that collectivisation was “voluntary” and forcing peasants to collectivise only harmed socialism.

Stalin urged the Central Committee of the Communist Party of Ukraine to take appropriate measures to prevent a harvest failure.

“The Political Bureau believes that shortage of seed grain in Ukraine is many times worse than what was described in comrade Kosior’s telegram; therefore, the Political Bureau recommends the Central Committee of the Communist Party of Ukraine to take all measures within its reach to prevent the threat of failing to sow [field crops] in Ukraine. Signed: Secretary of the Central Committee, J Stalin (Archive of the President of the Russian Federation 1932).”

Much of the political blame for the famine can be placed on Pavel Postyshev, who was appointed, on 24th January 1933, Second Secretary of the Central Committee of the Ukraine Communist Party. On 18th September 1933, knowing how unpopular the policy was with peasants, he ordered that the quota for export grain had to be fulfilled.

Even so, Koenker and Bachman in Revelations from the Russian Archives (1997) show that the evidence does not “support the claim that the famine was deliberately produced by confiscating the harvest, or that it was directed especially against the peasants of the Ukraine.” Tauger argues that it was due to natural causes, including fungal wheat rust, insect infestations and mice plagues. “[In] 1932 Soviet crops suffered from an extraordinarily severe combination of infestations from crop diseases and pests.” Agronomists found that “rust had caused the most harm to agriculture in Ukraine and in the Soviet Union generally.”

While mass graves of Nazi victims have been dug up throughout Ukraine and Eastern Europe, none have been found from the Holodomor period. Recent university analyses have mapped the famine to produce careful demographic studies on population losses (Ukrainian Research Institute 2020). The results dispute any high death toll. According to Shapoval and Vasilev in Komandiry Velykoho Holodu (2001), Kharkiv lost 120,000 inhabitants, Krasnodar 40,000 and Stavropol 20,000. It is a far cry from the 7-10 million claimed by extremists.

Stalin eliminated famine from Russia, through the collectivisation of the peasantry to enable the use of tractors and fertilisers to increase crop production. After World War II famine had disappeared from Russia. Ukraine has used the famine to create the Holodomor, for political reasons. It has been accepted by countries aligned with the USA and anti-Communism, including Australia and Canada. The blame for the famine goes to the extraordinary weather and the fungal rust that destroyed crops in Ukraine and western Soviet Union, not the Bolsheviks and Stalin. 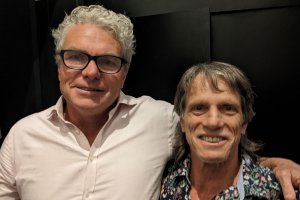