China’s space authority announced on Sunday that remnants from China’s Long March-5B Y2 carrier rocket reentered the Earth’s atmosphere, most of it burning upon entry, with some remnants falling in the Arabian Sea. 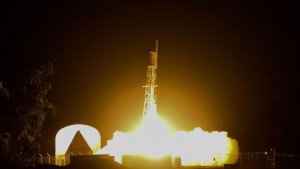