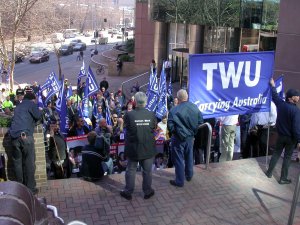 The Transport Workers’ Union will today announce action in the coming months against some of the biggest global retailers Amazon, Apple and Aldi, as well as domestic brands IGA, Kmart and Bunnings in a bid to make trucking safer and fairer. Workers in the maritime and trucking industries are taking industrial action defending their jobs, safe working conditions, and wages.