The [UK] PM is giving bosses, not workers, the right to “exercise judgement” on COVID safety

Boris Johnson is a gambler and lifting remaining COVID restrictions this month is a gamble with unpredictable consequences.

A day in the death of British justice

The reputation of British justice now rests on the shoulders of the High Court in the life or death case of Julian Assange.

On May 6, voters in Britain will go to the polls in local elections that will see the largest number of candidates representing the Communist Party (CPB) since the early 1980s. 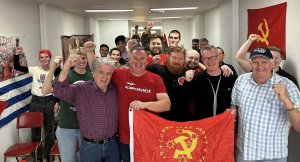